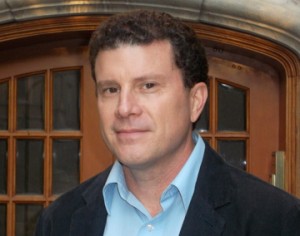 Evanston-based fiction writer Scott Blackwood’s new novel, “See How Small,” has been garnering the kind of reviews that writers dream of, along with notices from esteemed writers such as Ben Fountain, Margot Livesey, and Daniel Woodrell.

“See How Small” begins on a late autumn evening in Austin, Texas, when two strangers enter an ice cream shop shortly before closing time and murder the three girls working the counter. The book is a tale about the survivors—family members, witnesses, and suspects—enduring the tragedy’s aftermath. “See How Small” addresses the consequences of the girls’ deaths during the ensuing years, navigating how the crimes affect those closest to them and the girls themselves, whose voices still echo after their deaths. The teenagers hover among the living, watching over the town, attempting to connect with those left behind. “See how small a thing it is that keeps us apart,” they say.

Scott graciously agreed to answer some questions for Newcity.

Did you know when you started the novel that you wanted it to be a multi-voiced narrative?
I think I knew it would be multiple characters because I’m interested in the community—my previous novel is half-told in the collective voice of a neighborhood. But finding a way into the story was a struggle at first. So I went back to one of my earlier characters, Michael Greer, a troubled kid with a troubled family whom I’d written about in 1997 in a story called “Prodigal Fathers.” I imagined he’d somehow found himself involved indirectly in the murders. The first sections were about him raising his young daughter in the aftermath, five years later. And from there I found my way into Kate, the girls’ mother, and the firefighter who found the girls, and Hollis, the damaged, homeless Iraq vet who hung out at the ice cream shop. One sort of led me to the other, a daisy chain.

Are all of the characters in your novel based on real people? Michael Greer, as you mention above, is designated a person of interest by the Austin police. He’s fictitious, I’m guessing? If not, is this his real name?
The characters are invented composites of people I’ve known, mostly, not based on anyone associated with the murders. Michael is pure fiction. But there are some things that happened in the original case that were grafted onto this story almost in real time. On Christmas Eve in 2010, when I was maybe thirty pages into the novel, one of the original suspects in the murders (though never tried or convicted of anything), was chased through an Austin neighborhood on foot and in an altercation with Austin police, after he’d wrestled an officer’s utility knife from the officer’s belt and slashed him, was shot and killed. That entered into the telling.

Rosa Heller, the reporter in the novel, is partly based on my journalist friend Jordan Smith, at least some of the details of her early life in Chicago—she lived on the South Side and her father was a journalist with the Tribune, and she and her father did discover a dead body in a field once.

Jack Dewey, the firefighter, though wholly invented, has one real source or model, a firefighter I talked with who had discovered the girls’ bodies. His sense of trauma from that was very palpable after twenty years. And one image stayed with me and ended up beginning the novel: a bright bare foot sticking from the dark water. 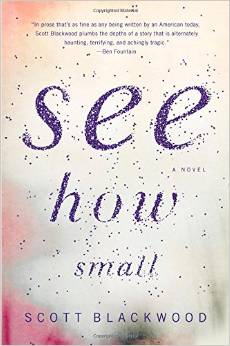 How long did you research and write “See How Small”?
I began thinking about it in 2008, likely talking with Jordan Smith—who covered the murders for fourteen years—about it and then writing it in 2009. I finished it in 2013, so five years in all.

Since your novel’s publication, has the Austin community renewed its efforts to solve these crimes? Or have the police detectives been working on this case more or less continuously since December 1991?
Only recently have they re-designated it as a cold case, because the police thought they had the men who did it. Then in 2009, more sophisticated DNA forensics retested some of the material and found the presence of two unknown men’s DNA, none matching the men who were convicted based solely on their confessions, which, because of the DNA and the accusations of rape, belied the information in the confessions themselves. I think they’ve likely left the case open but their minds are closed, despite the evidence. Like William Faulkner taught us, eventually, if a story is told long enough, it becomes the truth.

What are you working on now, if you don’t mind giving us a hint?
Thanks for asking! The new novel I’m working on is centered on the damaged Iraq veteran Hollis Finger, a prequel of sorts to “See How Small.” It’s about sons and mothers.