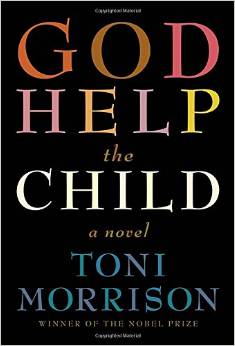 The last living American (and sole black woman) recipient of the Nobel Prize in Literature now offers “God Help the Child.” Like all of Toni Morrison’s novels, this one also runs “narrow but deep” as she once spoke of her widely acknowledged masterwork, “Beloved” (1987).

Enter Bride, who at birth profoundly repels her light-skinned mother, Sweetness, because of her “Sudanese black” skin. Bride aches for attention to the point of plotting to misbehave to earn spankings and at last, feel Sweetness’ touch. The closest she gets to this involves her testimony in court which sends a teacher to jail for fifteen years on child abuse charges, but even that isn’t enough. Enter Booker, who is haunted by his brother’s savage death and falls for the grown cosmetics mogul Bride, then leaves her after a brief but intensely carnal period, claiming that she is “not the woman…” Setting out to find him again, Bride meets Rain, a white girl who escaped a life of sexual slavery at her own mother’s doing thanks to hippies living in the California woods. All three nurse Bride back to health after she crashes her Jaguar into a tree. Later, she meets Booker’s aunt, Queen, a woman of stories and hard-earned wisdom. Queen feels guilt for her nephew’s behavior toward Bride and for the fractured relationship to his biological family.

The nightmares of the human experience Morrison never looks away from populate “God Help the Child.” Whether real or imagined, the childhood scars consuming this novel somehow lead to a hopeful ending despite Sweetness’ somber closing remarks: “You are about to find out what it takes, how the world is, how it works and how it changes when you are a parent.” This slender novel seems to ask if it is possible to defuse the past and be fully available to the present despite one’s deepest wounds, the vapors of the Internet and popular culture, or the pursuit of internal fulfillment through economic status and, naturally, consumerism. Writing of contemporary times is an absolute first for Morrison. In her hands, the present feels as immediate, sensual, complicated and wondrous as any historical period she’s taken readers through for the last forty-five years of her magnificent career. (J-L Deher-Lesaint)