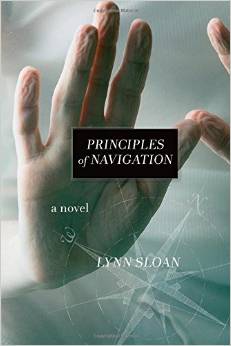 Chicago photographer Lynn Sloan’s debut novel, “Principles of Navigation,” opens with a photograph, a crystallized moment at Rolly and Alice Becotte’s wedding: “We are perfect here, aren’t we?” Rolly observes. A closer look reveals the disarray of life with the intrusion, at the right edge of the photograph, of the padded hip of a wedding guest that neither can identify. It is the imperfect unknowable that drives this domestic drama.

Theirs is a dynamic marriage with ever-shifting goals, longings, and moral high ground; they are united only as long as each exercises “a reserve, as if… they were asking each other for forgiveness.” As this fragile courtesy inevitably crumbles, each Becotte reveals more of their internal complexities. Alice is pliable, a bit superstitious, but she is a relentless logician in calculating her fertility. Rolly dreams of the world beyond their rural college town, constructing canoes that carry his imagination to the world beyond, but he is surprisingly uxorious.

The internal and external dichotomies of the Becottes are reflected in the alternating perspectives of each chapter, a balance that focuses our attention on a fulcrum of anticipation and apprehension. It’s the eve of a new century and the countryside is suffering a drought; the prospect of change charges every thought. Will the coming events bring a menace or a miracle? A virulent Y2K bug or the appearance of the holiest saint in the calendar?

While Rolly anticipates bringing forth great art, Alice’s expectations center on creating a child. As the novel progresses, their aspirations alter, and it is the paradoxes of this transmutation that give the novel its energy. Rolly wishes he could remember who said that an artist was someone who could hold two opposing ideas and still function, and indeed this is what Sloan’s novel accomplishes by putting two unique, creative, admirable, selfish, conflicted, flawed people in a marriage and tracing the metamorphosis this particular combination of traits and urges undergoes. The result is an annunciation, a miracle, with each Becotte graced with a surprising purpose by the end of this novel of generation, of stasis, and of transformation. (Leslie Fischer)