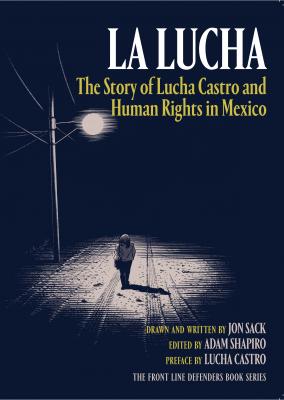 “La Lucha, The Story of Lucha Castro and Human Rights in Mexico,” is first in a series of graphic books conceived by Front Line Defenders, an organization based in Ireland whose mission is to protect human rights defenders around the world. Jon Sack and Adam Shapiro have worked together on “La Lucha” to create a graphic book set in Mexico in the state of Chihuahua, for years known as one of the most dangerous places on earth, where drug cartels and a corrupt governing body maintain brutal rule.

“La Lucha” emphasizes femicide and the vulnerability of women to violence among human rights violations. Heartbreaking, gripping and inspiring, it narrates the personal stories of seven Mexican human rights defenders, beginning with Lucha Castro, who founded and currently directs the Center for Human Rights of Women in Chihuahua.

All that is best in human nature—resiliency, courage, capacity to love, loyalty and idealism—is demonstrated by Castro and the other activists. Several of them have had family members killed by the Mexican army or drug cartel, and these stories of grief turned to constructive action are particularly moving. Chilling statistics come alive. A sampling of the numbers: 8,000 to 20,000 people reported missing or disappeared from late 2012 to May 2014; 2,764 women murdered in 2012; 85,000 people estimated to have been killed since the 2006 launch of war on drug cartels.

Adam Shapiro and Jon Sack have created, through their combination of prose and illustrations, a book that’s impossible to put down despite its painful subject matter. Jon Sack’s black-and-white panels are well paced and have a tight, unrelenting linearity that one associates with prisons and deserts rather than the Mexican beaches. This art perfectly serves Front Line Defenders’ mission to make the world aware of human rights defenders who place their lives on the line every day. It seems right to end here with the names of seven extraordinary fighters as they appear in the index of “La Lucha:” Lucha, Gabino, Alma, Marisela, Norma, Emilia, Josefina. (Natalie Black)