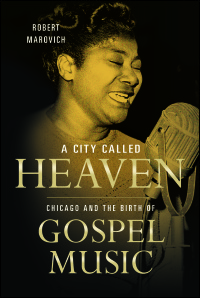 “A City Called Heaven, Chicago and the Birth of Gospel Music, ” is a thoroughly researched, dynamic account of gospel music’s history in Chicago over five decades, from the 1920s through the 1960s. Written by music historian Robert Marovich, it provides in-depth biographies of gospel music’s artists, and a riveting narrative of the two great waves of African-American migration north from the Deep South that gave birth to gospel in Chicago.

Gospel music eventually broke the lock that traditional European music had on Chicago’s black establishment churches, and Marovich, founder and editor-in-chief of The Journal of Gospel Music, and host of “Gospel Memories” on Chicago’s WLUW-FM, calls gospel music an “artistic response to the Great Migration…the gospel music community provided the catharsis and affirmation they needed to feel less like strangers in a strange land.”

Within a mostly Caucasian and often racist Chicago, work and housing were hard to find for new black migrants. Music and religion eased their transition into a new world, a world in which they eventually combined deep spirituality with urban cool. In fact, throughout its life, gospel has incorporated popular music innovations and in turn influenced contemporary music. From its roots in West African rhythms and call and response, it went on to assimilate and impact jazz, blues, swing, a cappella music, and 1960s soul.

Perhaps “A City called Heaven”’s most important point, however, is that gospel is a religious music that expresses sanctification, and that builds community. Radio shows dedicated to gospel, and then gospel-producing record studios, record stores, massive gospel conventions, were the creations of black men and women who achieved success despite the worst odds. Chicago’s Ebenezer Baptist Church is considered the birthplace of gospel, but Pilgrim Baptist Church also supported many important gospel artists: Thomas Dorsey, Sallie Martin, James Cleveland, Mahalia Jackson among them. In fact, Jackson’s breakthrough record of 1947, “Move On Up a Little Higher,” gave fuel to gospel’s commercial success in the following two decades, and came almost exactly twenty years after the first known recording of gospel music was made in 1926. (Natalie Black)

“A City Called Heaven, Chicago and the Birth of Gospel Music”
By Robert Marovich
University of Illinois Press, 488 pages, $29.95