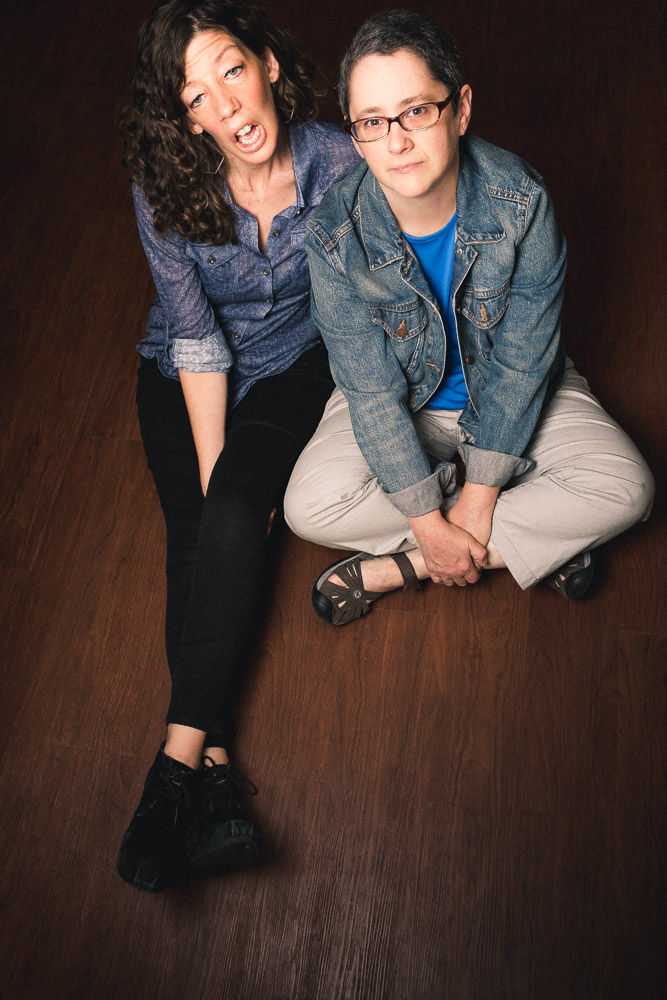 Sarah Hollenbeck and Lynn Mooney hit the road running almost immediately after they stepped into the roles of co-owners of Women & Children First. Since they signed the papers in August of 2014, they have remodeled the Chicago institution (just enough), stocked the shelves with stellar books, and stacked the calendar with countless literary events. There’s no question these two—with their combined experience and brimming passion for literature—will further the legacy of W&CF in promising ways that will please and inspire readers, authors and the literary community of Chicago, if not at large.

What’s the elevator speech of how you two came to know each other and co-own Women & Children First?
Almost immediately after Sarah was hired at Women & Children First, the co-founders Ann Christophersen and Linda Bubon announced their plans to retire and sell the store. As the months passed and the prospective buyers began inquiring, there was a general uneasiness among staff about what would happen to the store and to our jobs. All of us wanted to make sure that the new owners not only knew books, but were committed to the feminist mission of the store. Sarah, who had worked in bookstores part-time most of her adult life and loved it, approached Lynn, the store’s manager, and together they pooled their resources and applied to own the store.

What are some of the biggest thrills you’ve experienced so far since re-opening Women & Children First?
Sarah: I have quite a list of memorable moments that seems to lengthen monthly! The first was when we received a postcard from Ann Patchett, welcoming us to the “tribe” of bookstore owners. She signed the card “Solidarity” and that word continues to mean a great deal to me. Another memorable moment and huge honor was being named Chicagoans of the Year with five other bookstore owners. I was also so touched that Rebecca Skloot, author of “The Immortal Life of Henrietta Lacks,” was our second customer the day we reopened after the renovation. She graciously navigated the boxes of books that were still being unpacked and was so positive about all of the hard work we’d done. And, of course, nothing will really compare to opening an email last week and finding out that we’ll be hosting Gloria Steinem this October!

Lynn: I’ve loved seeing the expressions on customers’ and neighbors’ faces when they walk in the door for the first time. People have looked so clearly delighted (and relieved, too). And then they say, “Wow!” and it makes me smile.

Which bookstore(s) planted seeds of love in your hearts?
Sarah: Growing up, my mom and I spent quite a bit of time at People Called Women, the only feminist bookstore in Ohio that was coincidentally located in my hometown of Toledo. In fact, one of the first people I called when I was trying to decide whether or not to buy the store was Gina, the owner of People Called Women. She was very frank with me, describing how every year was a struggle, but she wouldn’t trade it for anything.

Lynn: My parents were big readers, but money was always tight, so growing up most of my books came from the library. But after college, I moved back to New York City (where I was born) and started my first job in publishing, and that’s when I fell in love with bookstores. Most of the ones I remember from that era (the eighties and early nineties) are gone now, but on weekends I would spend hours in St. Mark’s in the Village, the Scribner Bookstore in Midtown, Coliseum Books in Columbus Circle, or any of the Shakespeare and Company locations.

Lynn: I’m getting the store ready for a summer literacy program sponsored by the Friends of Andersonville, so if it’s a novel for eight to twelve-year-olds, I’ve probably read it recently! Over breakfast this morning I finished Louis Sachar’s “Sideways Stories from Wayside School” and next on the pile is “Junie B. Jones and the Stupid Smelly Bus” by fabulous Barbara Park. It’s so important that children be given a chance to read purely for pleasure. I’m really looking forward to putting books like these into kids’ hands this summer and say, “Have fun with this!”

What have you learned so far about the indie bookstore business, the community, yourselves?
Sarah: I am repeatedly astounded by the generosity, patience and goodwill of our community. On a personal note, a friend of mine told me last night that my “tolerance for bullshit” seems to have significantly diminished since I bought the store. I have to agree.

Lynn: I agree with Sarah about the generosity, patience and goodwill of our community. This store really has a special place in so many people’s hearts. I’d known this before, but now as co-owner, I am just bowled over by it. It’s been very humbling—and makes the work even more gratifying.

In an era of Amazon, the Kindle, bookstore franchises, etc., how does an indie bookstore maintain its relevance, its necessity?
We are a neighborhood bookstore committed to expanding and enriching the community. Amazon doesn’t offer that. Amazon doesn’t host story time every Wednesday at 10:30am. Amazon doesn’t give you the opportunity to say to that stranger who just plucked your favorite book off the shelf, “That book changed my life.” You can’t log onto Amazon to shake the hand of your favorite author. It is also our niche as a robustly political feminist bookstore that keeps us thriving. Customers know that when they buy books from Women & Children First, they are also supporting our mission. They appreciate that.

How would you say Chicago’s indie bookstore scene compares to other major cities in the United States?
As demonstrated with Chicago Indie Bookstore Day, everyone is rooting for one another to succeed. Also, I think all of us Chicago indies place a greater emphasis on the works of local authors.

What are your hopes and aspirations for Women & Children First?
The last year has been one big project after another! We went straight from buying the store to our successful Indiegogo crowdfunding campaign, to the holiday rush, to the renovation! While our goal right now is to establish a less-frenzied daily routine—for our own mental health!—our larger and long-term hope is to reach this fierce new generation of young feminists and ensure that they think of Women & Children First as a welcoming and inspiring space for them to explore, define and redefine feminism. (Sarah: I’ve heard fifteen-year-olds come into the store discussing the limitations of the traditional gender binary and that makes me very happy and hopeful! We need to harness this momentum and our bookstore is the perfect space for such conversation and action.)

What are a few Women & Children First events you’re most excited about hosting in the coming year?
In July, both Caitlin Moran (July 10 at 7:30pm) and Roxane Gay (July 16 at 7:30pm) will be visiting the store for two separate readings. This summer, we’ll be supporting our phenomenal local authors with events for forthcoming books by Sara Paretsky and Rebecca Makkai. Then, October will be a very big month for Women & Children First. We’ll be hosting Jenny Lawson, “The Bloggess” herself, for her new memoir (October 25 at 4pm); the superb literary novelist Geraldine Brooks (October 30); and that same week, we’ll be hosting a ticketed event with Gloria Steinem (October 29)! Stay tuned to our Facebook and website for more details about the Steinem event.

What fantasy jobs do you daydream of while shelving books?
Sarah: I have my dream job now and it doesn’t allow much time for daydreaming! My only wish is that at some point I can incorporate mini-sabbaticals into my schedule, allowing me to go somewhere secluded with mountains and a lake and do some serious writing.

Lynn: One day last year I saw an announcement about a new English-language bookstore opening in some wonderful place I’ve always wanted to visit (I think it was Morocco), and I thought, “Darn! Why didn’t I think of that?!” No, but seriously, I couldn’t be happier—this is my dream job. Sad to say, while shelving books I mostly fret about not having enough time to read the books I have in my hands.

Any future cameos to be made by “Portlandia”’s Fred Armisen and Carrie Brownstein?
We’ve tried to connect with Fred and Carrie via Twitter a few times. We have a running social media conversation with In Other Words, the Portland-based feminist bookstore where Women & Women First is filmed, debating which of us is the inspiration for the show. It’s a friendly banter and I hope that it snags Fred and Carrie’s attention at some point. Carrie has a forthcoming memoir, “Hunger Makes Me a Modern Girl.” We encourage all of our Twitter followers and other fans to help us petition her to make us a stop on that tour.

Special shoutouts?
My mom and dad and my sister Annie were instrumental throughout our renovation. Annie is an interior designer and Dad is an architect. They were alongside us at the store from 6:30am to midnight day after day, making sure that everything was going as smoothly as possible. On February 1, a major snowstorm hit and all of us got stuck at the store. So, we ordered a pizza and continued working into the night! At one point, a longtime customer who lives across the street from the store and could see us working, called to invite us over if we needed a hot shower or a couch to crash on for the night. That was one of the most gratifying and heartwarming experiences of my life. Amazon can’t match that kind of love.