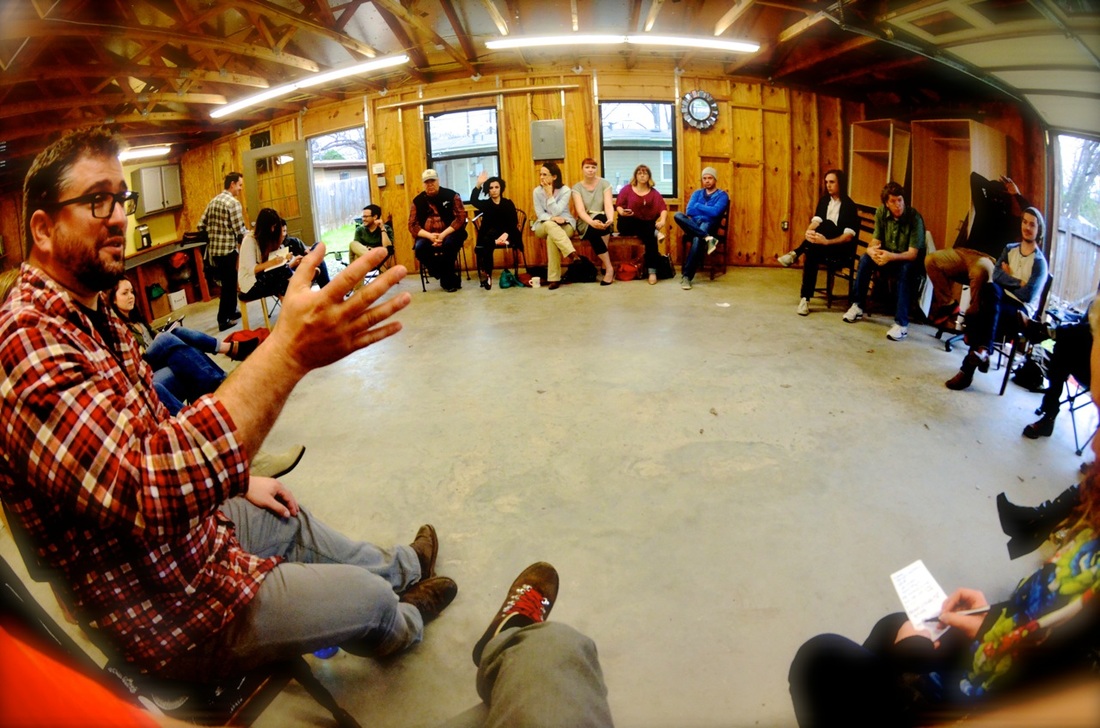 Scott Whitehair is living his dream. As a storyteller prominent within Chicago’s live lit scene, he’s crafted a life’s work out of what had previously been seen as a personality quirk. In fact, just recently an old friend of his remarked, “It’s nice to see people asking you to do the thing you were always getting yelled at for when you were twelve.” In fact, people are doing more than just asking him to tell stories these days; they are regularly rewarding him for them. Scott is a two-time MothSLAM Chicago winner as well as a finalist at the 2012 Windy City Story Slam All-City Championships.

Scott began his relationship with storytelling about eight years ago when he decided to take a solo-performance workshop at the Annoyance Theatre. He became hooked: “A few of us from the workshop decided to keep working at it, and did shows for about a year in random places around the city, to audiences made up of coworkers, spouses and people who owed us money.” This group eventually evolved into This Much Is True, a monthly storytelling show that just finished its seventh year. Scott also produces Do Not Submit, a free open-mic series in neighborhoods throughout Chicago. According to Scott, “[It] was created to provide a pressure-free space for people of any experience level to practice or try this thing out.” Since May of 2013 TMIT has been co-hosted by Stephanie Douglass, who also co-hosts Do Not Submit Englewood. Stephanie and Scott make a formidable storytelling team. As Scott explains, “Steph is my creative soul mate and we have a lot of fun together dreaming, planning and scheming.”

Scott recently transitioned to supporting himself full-time through his storytelling work. While many people seem to conflate this form of “making it” with living a life of some level of leisure, Scott reminds us that this is not the case. “Doing what I love for a living, in a manner I am not creeped out by, has been exhilarating, but also a ridiculous amount of work.” And busy he certainly is. In addition to Do Not Submit and This Much Is True, Scott is the creator and host of Story Lab Chicago, a monthly open-mic series at The Black Rock Pub and Kitchen. He regularly teaches classes and workshops on storytelling. Scott was also recently appointed to the board of The National Storytelling Network.

As Scott describes it, the art of storytelling also does important work on a personal level and has the potential to connect people as well as validate their various experiences. “We know ourselves, each other and the world through our stories. There is no barrier to participation except having to be a human being who has spent any amount of time on this planet. Of course, storytelling is also a craft you can work on, get better at, and use to fully develop your own unique voice, but we all have stories that we need to tell and that people want to hear. Everyone gets to do it and should. This is what makes it special.”

Chicago plays a significant part in Scott’s relationship with storytelling. As he explains it, it is this city’s generosity and embrace of DIY art that makes it possible to do the work that he does. “In Chicago, your ideas can progress from daydreams into reality if you are willing to put in the effort, and I am grateful to be here.” (Kim Steele)