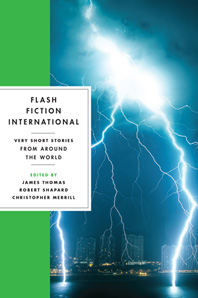 Some anthologies are guaranteed to be piles of good literature. Edited by a trio that includes James Thomas and Robert Shapard, editors of the influential “Sudden Fiction” anthologies, “Flash Fiction International” is such an unlikely disappointment. Given their history with flash, it is unsurprising that the stories are excellent.

The duds are few, while the strong ones stab unexpectedly, sometimes literally, like Edgar Omar Aviles’ “Love” in which a mother suddenly stabs her daughter to save her from a life of poverty. Others illustrate flash fiction’s structural similarities to jokes, leaving on punchlines of a sort, as in Linh Dinh’s story “Man Carrying Books” in which an illiterate Vietnamese bicycle repairman, who carries and collects books to garner respect and protection, has “his absolute faith in books” rewarded “when, during one of the fiercest battles of the war, all of the houses of his village were incinerated except for his leaning grass hut, where [he] squatted trembling but essentially unscathed, surrounded by at least ten thousand books.”

If any part of the anthology’s success leans toward the ambiguous, it is the international part. The variety of voices and nations included is indeed wide, but a quarter of the collection is inhabited by writers from Anglophone nations, and a whopping fifteen stories of eighty-five are from the United States. I was both distressed and glad to encounter Stuart Dybek’s contribution. His spot could have easily been lent to a voice I’m unfamiliar with but was instead gifted to a writer so synonymous with this form that it would be weird not to include him. Should a collection like this parse out the familiar so we can be exposed to voices unheard, or is my wish to parse out the familiar deeply segregationist?

Ultimately, while I think “Flash Fiction International” could have featured a few less Americans while keeping genuine masters like Dybek, it is undisputedly a good flash fiction anthology that mostly succeeds at highlighting international voices. It is to its credit that so many of the stories which linger are the ones that were translations or from distant parts of the globe. (Brendan Buck)