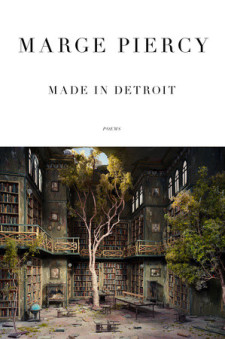 In the opening poem of her collection of the same name, “Made in Detroit, ” Marge Piercy describes the influence the city had on her as a child: “I was formed by beating like a black/ smith’s sword, and my edge is still/ sharp enough to cut both you and me.”

Detroit is a place Piercy escaped from and, in this collection, mournfully looks back on. “Oh my city of origin, city who taught/ me about class and class warfare.” Even “The scent of apple cake,” a poem about her mother’s baking, is soaked in bitterness: “In the oven she made sweetness/ where otherwise there was none.”

While Piercy’s childhood in Detroit grounds this collection it only represents about one sixth of the content, and the spectrum of topics covered is vast. Piercy reflects on her life in Cape Cod, her marriage, the dying of friends, growing older, politics, feminism and her Jewish heritage.

This diversity in subject matter is exemplified by two poems that appear next to each other in the last section of the book, “Looking back in utter confusion.” In the first poem, “A republic of cats,” Piercy contemplates the community that exists between her five cats, “Nobody rules. They all/ take turns.” And on the very next page in, “What do they expect?” she remembers past lovers, “What traces have I left/ on all the bodies I have held?/ Do they remember my mouth?/ Let them forget.”

“Made in Detroit” is a beautiful collection, full of thoughtful reveries and impassioned critiques of current political and social injustices. I read it in one sitting and even now, days later, find myself thinking about it often. I hope I never forget lines like: “Absence of someone loved/ can be a presence, a lack/ that whispers, that raises/ hair on your neck” or “How we come apart in death,/ not only our bodies decomposing/ but our lives, stuck in random/ pieces in the brains of others.” As it sometimes is, I knew just a few pages into “Made in Detroit” that this would be a book I revisit throughout my entire life, finding new meaning as each year passes. (Kim Steele)