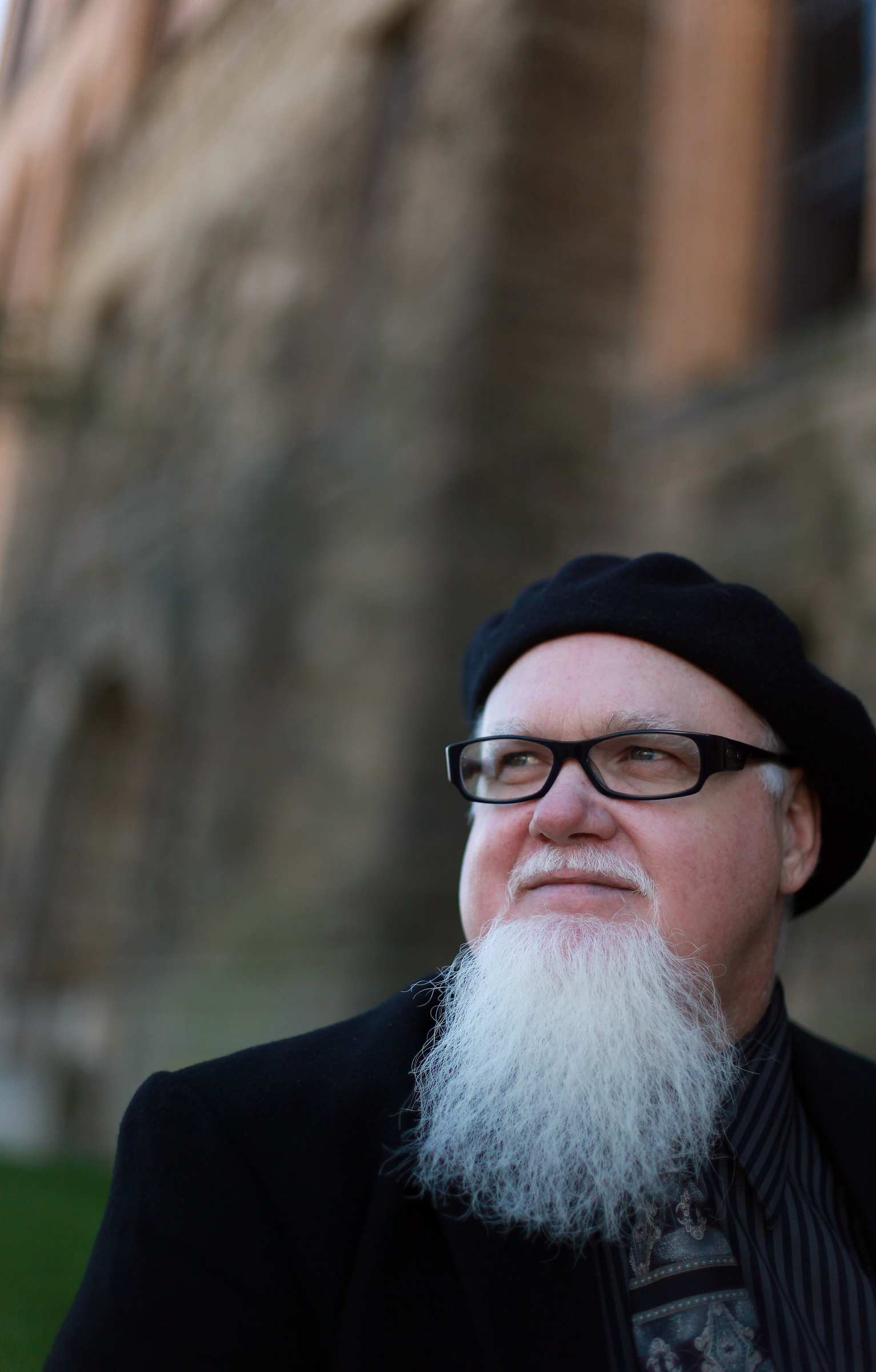 Rare is the writer who has an easy time of it making money or getting their name out there. Writers are often grossly underpaid, uncomfortable about self-promoting and already juggling too much to take on extra work that does not pay. When money for the arts is especially hard to come by, as is the case in Detroit or anywhere really these days, it’s a particularly special thing to have someone like M.L. Liebler in one’s corner.
Poet and professor at Wayne State University, director of The Ridgeway Press, and co-editor of the Made in Michigan Writers Series, M.L. Liebler has an extensive history of organizing programs to bring community together to support the literary arts in Detroit and has created opportunities, paid opportunities, for writers’ voices to be heard for decades.

I had the terrific pleasure to talk with Liebler during a recent visit to Detroit. We got together at the Cass Café, an alternative bar/restaurant/art gallery in the Cass Corridor, a neighborhood formerly populated with “robbers, hookers, and dope dealers,” but which now gives off more of  a hipster vibe vis-a-vis the bicycle affixed to the side of the building. At the café, Liebler shared stories about cutting his teeth as a performance poet in Chicago in the early eighties, his work with the Poetry Resource Center in the mid-late eighties, the YMCA Writer’s Voice in the nineties, teaching at Wayne State University, traveling the world for literary events and workshops, and all sorts of intriguing business between.

It was through his buddy Carl Aniel that he connected with the Chicago poetry scene. At that time, in the early eighties, he says, there wasn’t much of a scene in Detroit. Aniel was going to school at Columbia College for filmmaking, had seen a flyer about an open mic at a bookstore in Oak Park, told Liebler about it, and Liebler came to town. Before he went up and did his bit, he said “If anybody knows of any poetry events, consider this an audition.” Afterward, Chicago’s Marc Smith, then-future host of the Uptown Poetry Slam, approached him and said, “’I’m working on this idea. It’s going to have an open mic, a feature. I haven’t fleshed it out but it’s going to be like Olympics with poetry, people reading and scoring. I’d like you to be a feature on it.’” Liebler liked Smith immediately, agreed, and started regularly visiting Chicago for the span of almost a decade. He’d visit for ten days or so, go to Cubs games during the day and recite poetry around the city at night. The poetry slam was then hosted at Butchie’s Get Me High Jazz Club in Wicker Park, where Liebler remembers only Old Style beer being available and it was “help yourself,” meaning you’d put a buck in a can at the end of the bar and help yourself to a beer. Liebler would stay with Aniel, who lived illegally in a basement of a big building by the Chicago River, which had no bathroom or shower so they’d use the river. Living next door were members of jazz great Sun Ra’s band, also squatting illegally.

By about the mid-late eighties, Liebler says the lit scene in Detroit started to grow. It was right around then, in 1986, that the Poetry Resource Center of Michigan sought out Liebler to help put the PRC on the map. They wanted someone younger who would bring them some notoriety. Hardly any time passed before Liebler was voted president. Though he was in turmoil at first about playing that role, he wanted to change things and that he did. He put together “an eclectic board of different people: an African-American vice president and a Latino secretary,” which upset a number of folks. One person on the board walked out, saying “’I’m not following M.L. Liebler into the third world. I quit.’ And then stormed out. But that’s okay,” Liebler says. “On our grant, I counted him as mentally ill. Mentally ill? One.”

In addition to refreshing the PRC’s board, he launched a number of programs through the center—one of which really took off, called Read and Feed. Previously, PRC events would bring in about fifteen to twenty attendees. But for Read and Feed, 200 to 300 would show. The series started as Rock and Read, where he would invite writers to do short readings until 11pm and then alternative punk rock bands would take the stage at Alvin’s (now, Tony V’s). But people often booed the musicians, wanting more poetry; some would just leave. It became hard to get bands to participate knowing how the event would play out. After a while, Liebler and the board changed the title, format and venue. It was thereafter Read and Feed. People paid to enter, would bring canned goods which were donated to the United Methodist Church, and the event featured writers only. 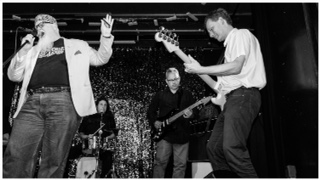 Liebler in Munich with The German Coyote Monk Band

In the early nineties, Liebler was recruited by poet and founder of the YMCA National Writer’s Voice Jason Shinder who had heard about all that Liebler was up to, and invited him to help begin an arts and humanities chapter of the YMCA in Detroit, and start a Detroit satellite of the National Writer’s Voice. Liebler was a little skeptical about the YMCA in Detroit being open to such a thing, but when the YMCA said “absolutely!” Liebler got to work, organizing readings and workshops for the arts and humanities arm of the YMCA, inviting big names like Allen Ginsberg and Philip Levine—names that enticed even suburbanites to the city, along with many others. His work with the YMCA also involved him in helping to organize the Lit Fest Stage at the Detroit Festival of the Arts.

After decades of coming up with programs to showcase writers, Liebler is still very much at it. Alongside Carole Harris, he currently organizes Detroit’s annual Midtown Literary Walk: a huge day-long production every September that features national and regional writers at different venues around the city. As an editor, he is also busy bringing together writers for a number of anthologies. A few years back, he edited “Working Words: Punching the Clock and Kicking Out the Jams.” Due out in spring of 2016 is “Bob Seger’s House: An Anthology of Michigan Short Fiction,” and in fall of 2016, “Heaven Was Detroit: Essays on Detroit Music from Jazz to HipHop.” Also forthcoming is his own collection of poems, “I Want to Be Once New.”

When I asked Liebler what keeps him going, he says he doesn’t really think about it. “I just keep doing what I think is right and beneficial,” he says and indicates he’s mostly always been concerned with two things: One, I want to use as many artists as possible, and two, I want them to be paid… When they put me in charge of a reading series or something, it’s like putting the union guy in charge of a company. I’m always trying to give people more than less. I don’t know if it’s my working-class roots, but that’s how I see it.”

I talked with him about the cultural renaissance underway in Detroit. He says it’s definitely becoming more and more “the place,” and likens its rediscovery to what happened with Brooklyn years back. He attributes some of the shift to the incredibly affordable housing which has attracted young people to the city. Wayne State University has also begun to build dorms and apartments on site, so a lot more students live on campus, in the city, which also contributes to change. He says, “I think only good things are going to happen here.”

If you’re interested in seeing Liebler live in Detroit, you’ll more than likely find him at Poets and Pies at the Hannan Café or at The Dawgs and Poets Literary Series at the Atomic Dawg. You can also catch him hosting Detroit Tonight Live at the Jazz Café at the Music Hall.