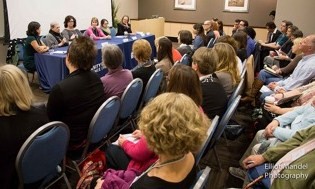 In 2011, Mare Swallow created the Chicago Writers’ Conference after she noticed a lack of opportunity in Chicago for writers to rub shoulders with editors, agents, publishers and other literary professionals. Now in its fourth year, the growth and success of the CWC is a testament to the unique and vibrant Chicago literary scene.

There are two exciting updates to look forward to at this year’s conference. In previous years, the CWC would host just a handful of literary agents, which meant there was less availability for writers to sign up for an opportunity to talk one-on-one with an agent. Mare explains that, “[t]his year we have over 150 slots available so there is still room for people to come and make an appointment to meet with an agent or a publisher and get feedback on their pitch and maybe see if that agent or publisher wants to hear from them in the future.”

The other addition is that of the “small session.” These sessions are capped at ten people and therefore allow participants to sit at a roundtable with someone who is either “some kind of expert in their field or someone with a unique perspective” for a more intimate conversation than you might expect at a conference. These sessions are a great opportunity for guests to ask questions or seek words of advice. Small sessions this year include but are not limited to: Writing and Publishing Poetry with C. Russell Price, Self-Publishing with Clayton Smith, and Website 101 for Writers with Andy Crestodina. 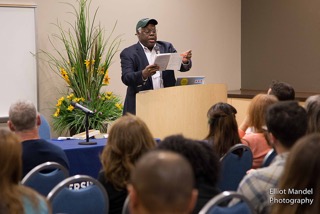 It is additions like these that have helped the conference grow and encourage audience members to attend year after year. As Mare explains, “We keep the nuts and bolts and really popular items coming back—sometimes with new people, sometimes with new perspectives. It is a great weekend. It is a lot of learning, a lot of fun.”

As well as being a source of fun and knowledge, the CWC and the networking opportunities it creates are also a true help for many writers. In 2012, at the very first CWC, Chicago author Patricia Skalka, a writer who had previously been on staff with Reader’s Digest, attended a session on independent publishers. Skalka had written a mystery novel and unsuccessfully tried to garner interest in it from New York. After the session however she decided to look local. She sent a query to the University of Wisconsin Press, received a response within the hour and a year later had published “Death Stalks Door County.” This is the sort of magic that the CWC creates.

Headlining this year’s conference are Rebecca Makkai (“Music for Wartime” and “The Hundred-Year House”) and Karen Abbott (“Sin in the Second City” and “American Rose”). Attendees can also look forward to a diverse number of panels on everything from branding yourself, to pitching, to how to break into the film industry. There will also be two cocktail parties this year as well as a “Book and Booze” raffle. Online registration closes September 18. (Kim Steele)