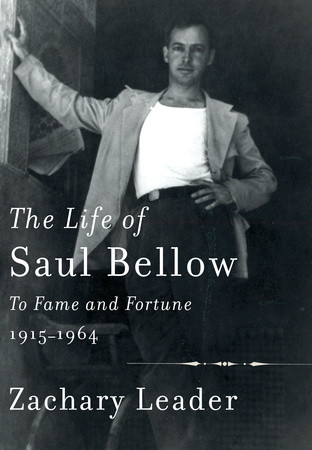 When Greg Bellow’s memoir about his father, Saul, came out in 2013, the Independent headlined its review, “Great author, terrible father.” Between the younger Bellow’s book and the three other biographies, to say nothing of the fact that Bellow’s own fiction was thinly veiled autobiography, what does Zachary Leader’s two-volume “The Life of Saul Bellow” bring to the already-crowded field of Bellow studies?

For people like me, who have to confess they’ve never read much Bellow, there’s the cynical temptation to say that with Leader’s work we don’t need to. Certainly most of the plot points from Dangling Man, The Adventures of Augie March, and Herzog can be found in the first volume: “To Fame and Fortune: 1915-1964.” We see Bellow’s parents’ childhoods in Russia; their immigration to Montreal, where Bellow was born; the family’s move to Chicago; and Bellow’s rise to fame, ending in his arrival “at the pinnacle of American letters,” as Leader writes. Marriages one and two are covered in detail, and his relationship with his third wife, Susan, begins in the last chapter, by the end of which things have not yet gone south. We see the womanizing egomaniac as well as the brilliant writer.

Leader unpacks events in vivid detail, by not only using Bellow’s letters and more than 150 interviews with the people involved to illuminate the stories, along with other biographies and source material, but turning back to the work itself, quoting gorgeous passages from all three of the above novels and more. Proving an adept prose stylist in his own right, he describes Bellow’s autobiographical fiction as “putting a current through the wire of fact.” There’s a great description of the genesis of Augie March as told by Bellow in an interview with Philip Roth.

Outside Bellow himself, it’s also worth hearkening back to a time when aspiring writers pursued graduate studies in anthropology, which Bellow called “the best discipline, the one that will aid you most” as a writer, and when literature was at least a somewhat larger part of the national conversation. Ralph Ellison was a close friend and onetime housemate of Bellow’s, as was John Berryman, and the supporting cast and cameos by literary and academic superstars alone are worth the price of admission: Hannah Arendt, Robert Penn Warren, and obviously Roth, just to name a few.

Despite his efforts, Leader does not, and maybe cannot, come across as an unbiased observer. I’m still troubled by his question, in the middle of the description of his second wife Sasha’s sexual abuse by her father: “Could Sasha have resisted?” Perhaps Bellow’s spirit infested him more deeply than he realized. (Jeanie Chung)