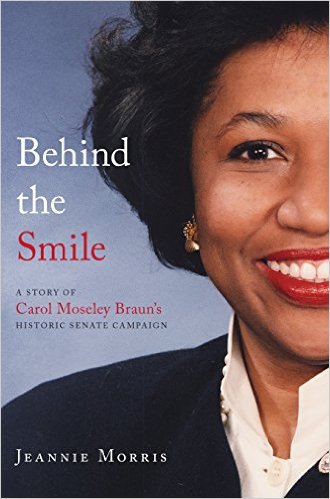 “The year of the woman,” 1992, was a time of idealism and anger brought to the fore after the 1991 Senate confirmation of Clarence Thomas for the Supreme Court. A Judiciary Committee of white men concluded that Anita Hill’s accusations of sexual harassment against Thomas were insignificant. Illinois democrats and progressive women were infuriated that Democratic Senator Alan J. Dixon had voted for Thomas’ confirmation. Carol Moseley Braun decided to challenge Dixon, and the account of her 1992 campaign as described by Jeannie Morris in “Behind the Smile” is riveting.

University of Chicago Law graduate, Cook County Recorder of Deeds at the time of her campaign, divorced, a single mother and a feminist fighting to be taken seriously in a man’s world, Braun represented the challenges women of all backgrounds face. EMILY’S List provided her with the first significant campaign donation. A good beginning, except that menacing clouds were forming in the shape of Braun’s campaign manager and eventual boyfriend, Kgosie Matthews. While controversies arose during Braun’s campaign, allegations of sexual harassment against Matthews sent to Braun in an anonymous letter could have ruined her; sexual harassment allegations against Clarence Thomas had brought Braun into the limelight to begin with.

When Braun won the 1992 election she became the first African-American woman elected to the United States Senate. Rather than ask Matthews to step away, she stuck with him, even accompanying him to Nigeria to visit dictator Sani Abacha in August of 1996. Braun opened herself to charges of corruption for the sake of an unscrupulous man, and lost her 1998 reelection bid to Republican Peter Fitzgerald.

Morris, an award-winning journalist and author of “Brian Piccolo: A Short Season,” writes of her responsibility to tell the complete truth. She narrates how Braun stood up to Republican Senator Jesse Helms and persuaded the Senate not to renew a design patent that contained the Confederate flag. Here was the Senator her supporters had dreamed of. It’s impossible not to think of what might have been. “Behind the Smile” is a story of courage and frailty, as the best stories always are. (Natalie Black)