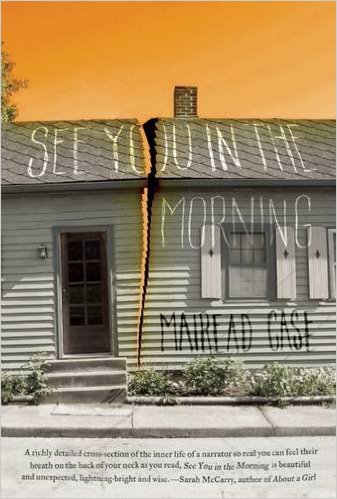 Mairead Case’s debut novel, “See You in the Morning” is a moving and tenderhearted portrait of a teenager in the summer before her senior year of high school. The girl is acutely aware that this summer will mark the end to the way things have been: “This summer is the last one nobody really cares about. I keep wishing I could hold it, hold on to not having to make anything up so people will like me, hire me, kiss me, or whatever.” But of course the summer rushes on and she, along with her two friends, John and Rosie, find themselves growing in different ways.

The narrator spends her days working at the local big box bookstore, going to punk shows with her friends, hanging out with her eccentric neighbor Mr. Green, and attending church with her mother. She also spends much of her time ruminating on her feelings for her friend John, believing she may be in love with him.

I found the girl’s capacity for reflection to be especially compelling. It is as though she exists without an emotional exoskeleton. Everything gets in and sticks like dirt in an open wound. She can’t stand the mothers on their phones during the bookstore story time (“If they aren’t interested, how do they expect their kids to be? You have to set an example once you have kids. Maybe that’s part of why I don’t want any”) or the “prepared-looking woman” who drops off her elderly father at the bookstore so she can attend a meeting. Case has written a character whose extreme sensitivity is at times heart wrenching and, at other times, hilarious.

The narrator’s fear of the other side of the summer is understandable when you consider how none of the adults in her life represent anything particularly promising. There’s the alcoholic drama teacher who insists on singing “Danny Boy” most mornings before class, her colleague at the bookstore who—now sober and nearing forty—has moved back in with his parents. Then there are Rosie’s parents who sleep in separate bedrooms and John’s mom with her “tired eyes.” Even the narrator knows that to grow up means she will have to say goodbye to this town and these people or “otherwise I’ll just take care of everyone else.” Like “The Perks of Being a Wallflower” and “Hairstyles of the Damned,” Case perfectly captures the melancholy and hopefulness that fill those liminal years before adulthood. (Kim Steele)