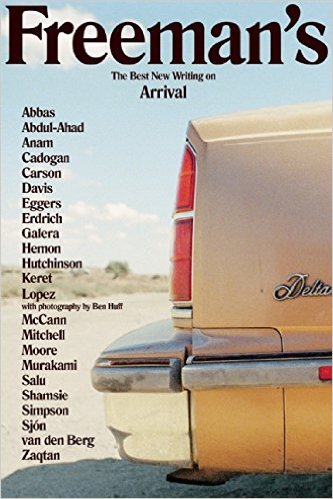 Arrival is a verb denoting the attainment of a goal at a journey’s end. However, as John Freeman’s infinitely relatable and beautifully crafted prose and poetry anthology “Freeman’s: The Best New Writing on Arrival” demonstrates, the word arrival is more indicative of a discovery than a destination. The work Freeman presents transports us to events, life milestones and new understandings that serve as springboards for further journeys.

Freeman has assembled a thoughtful and profoundly accessible collection of work that connects our vulnerabilities, our expectations and our hopes. According to Freeman, the very act of reading can be seen as an arrival: “Every time I read, I look to recreate the feeling of arriving that day,” Freeman tells us. “Stories and essays, even the right kind of poem, will take us somewhere else, put us down somewhere new.” It is from this somewhere new that the conversation takes root and the potential for new arrivals blooms.

Freeman’s debut biannual anthology offers previously unpublished work by accomplished writers who have certainly arrived. Garnette Cadogan tells of his move to New Orleans from his native Jamaica, only to find that the simple art of walking becomes fraught upon his arrival, due to his skin color. Helen Simpson arrives at menopause and parses its meaning, both for who she’s been and the person she’ll now become. Dave Eggers writes of an elderly gentleman’s arrival at a wedding and his ensuing confusion surrounding the fork he inadvertently brought with him. Etgar Keret arrives stoned to an event at which he’s the featured speaker and contends with the aftermath of his actions. New fiction from Aleksandar Hemon, Haruki Murakami, Laura van den Berg and others demonstrate that it’s ultimately what these writers discover after their arrivals that speaks to us about our shared humanity. (Amy Strauss Friedman)

The Chicago Launch of “Freeman’s: The Best New Writing on Arrival” with John Freeman and Aleksandar Hemon takes place Monday, October 5 at the Hideout, 1354 West Wabansia, (773)227-4433, at 7pm.