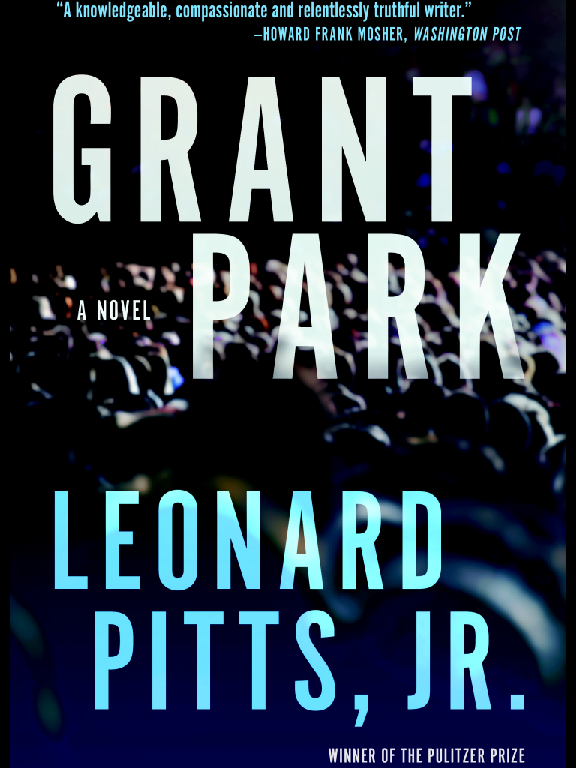 “Grant Park,” the third novel by Pulitzer Prize-winning columnist Leonard Pitts, Jr. centers around Malcolm Toussaint, a black newspaper columnist who has consciously decided to torpedo his career by sneaking a vehement screed into the newspaper on the day of the 2008 presidential election, announcing his exasperation with white America. On the way home from gathering his possessions from work, Toussaint has his car rammed into and is subsequently abducted by a pair of white supremacists with a hopeless and harebrained plan to assassinate then-candidate Barack Obama at his rally in Grant Park. Following his kidnapping, Toussaint flashes back to the 1968 Sanitation Workers Strike in Memphis and his chance encounter with Martin Luther King, Jr. before his untimely assassination. Also prominent in the story is Toussaint’s similarly aged white editor Bob Carson, who loses his job in the wake of Toussaint’s column and disappearance. Carson, who is left looking for the MIA Toussaint, also has flashbacks to 1968 in the wake of his ex-flame Janeka contacting him for the first time in forty years.

“Grant Park” is split evenly between the two time periods, 1968 and 2008, and it almost reads like two separate books. Both are largely concerned about the same thing, race relations in America, but in different ways. The 1968 sections largely read as a serious drama that debates the merits of peaceful protest versus the tragedy that is a riot as told through the civil unrest of Memphis, a debate that’s particularly relevant following recent tumult in Ferguson and Baltimore. The 2008 parts, on the other hand, read as farcical comedy. While the body count gets surprisingly high to let Pitts’ incompetent racists be legitimately dangerous, the events are draped in such absurdity that I often found myself laughing, such was the case with a passage where one of them is forced to run in terror from a young female reporter he attempted to batter. The satire isn’t just limited to Pitts’ racists either: of particular note are Toussaint’s dismal hopes about Obama’s possible election in contrast to his captors’ certainty of it.

The tones of these eras occasionally clash, but both narratives are compelling individually and Pitts is able to weld the two together through the use of overlapping themes and arcs. The novel can be a little heavy-handed at times, to the extent that the integrationist thesis of the book comes out of no less than a discussion between one character and Dr. King. But despite the didacticism, “Grant Park” is a book that’s both socially relevant and a lot of fun. (Brendan Buck)