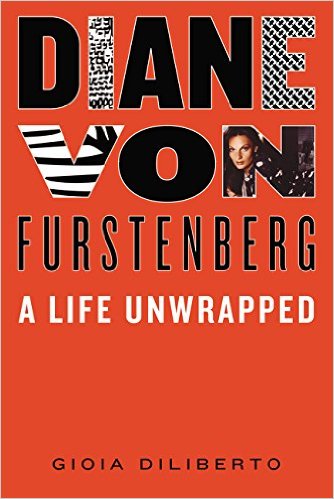 A Diane von Furstenberg dress is a great equalizer. I held an informal poll on Facebook and discovered that friends of different shapes, sizes, coloring, lifestyle, location and wealth all had DVF dresses in common. I shouldn’t have been surprised by the garment’s popularity, because last year the company had sales of an estimated $500 million. During the early seventies, the wrap was selling at a rate of 25,000 per week, before ubiquity killed it in 1977.

In “Diane von Furstenberg: A Life Unwrapped,” Chicago-based journalist Gioia Diliberto digs into the rise, fall, rise, fall and rise of both the woman and the brand.

Thoroughly researched, it is a juicy biography of a fashion icon. Diane, the daughter of a concentration camp survivor, became a princess and blazed her way into America. She aimed to create body-conscious clothes that were easy to wear and affordable. When heavily pregnant, Diane made the rounds of New York retailers with her samples in a suitcase. Some executives refused to meet her then, but by the mid-1970s the wrap dress was everywhere.

Diliberto lifts the curtain on the cutthroat business realities underpinning the fashion industry’s glamour. A good chunk of the book documents DVF’s investment decisions, market image, naming rights and brand directions—some genius, others disastrous. It’s no dry text, however, because the authorized gossip about Diane makes the Kardashians seem like virgins. Diane’s first husband and father of her two children was Egon von Furstenberg, a bisexual prince descended from Charlemagne. The couple were part of the hedonistic “Eurotrash” who jet-setted from New York to Saint-Moritz and Sardinia, lounging poolside, drinking, sunning, smoking pot and having group sex on their rooftop terrace. Sexually fluid, flamboyant and spontaneous, this milieu considered sexual fidelity to be bourgeois and love something for “cheap magazines.” Diane hung out with the Studio 54 set, including Andy Warhol, who reserved some very bitchy lines for her.

The book is pitched as a triumphant tale for women. Diane von Furstenberg is portrayed as a self-made woman, although she had plenty of money and connections behind her. Despite two close calls with bankruptcy, she remains a hard-working designer, savvy businesswoman, parent, mentor and activist. We are asked to admire her as a survivor, and she wants to be remembered as “a nice woman who inspired other women.” (Toni Nealie)