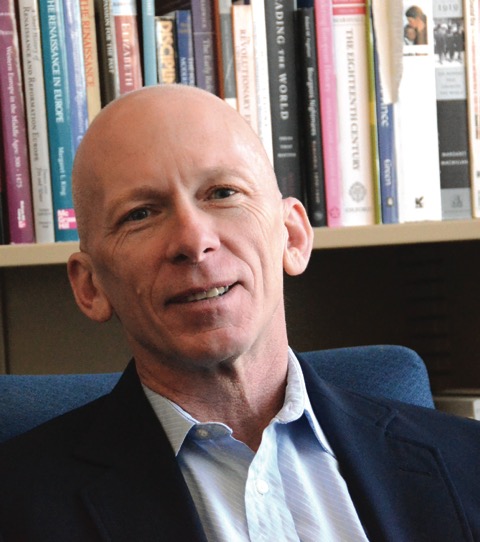 Chicago’s Loop was once a lively area of movie theaters, the second most important cinema market in the country from the 1920s through the 1970s. By 1990, all eleven venues were gone. Film historian and Aurora University professor Gerald R. Butters has written a thoroughly researched and absorbing book, “From Sweetback to Superfly: Race and Film Audiences in Chicago’s Loop,” examining the clash of community, entertainment and business interests in Chicago.

When Butters moved here from Kansas in 1999, he noticed the absence of theaters and heard that some suburban dwellers refused to go to the Loop. “I wanted to figure out why those theaters no longer existed. I had no idea that it had anything to do with race,” he said.

A quote from Myrna Lovejoy highlights the segregation of the time: “For whatever reason, I did not feel the world was mine.” Chicago’s Loop was considered a “white space” until the late 1970s. After Martin Luther King, Jr.’s assassination, black patrons flocked to the area to watch black-themed movies, which were an important vehicle for consciousness-raising at the end of the civil rights era. As the area became a “black space,” the white mainstream media fanned a perception that the Loop was dangerous and full of black criminals. The cinemas were razed. Their disappearance was significant, because the city was a crucial market for Hollywood. “Distributors knew you could make or break a movie in Chicago,” said Butters. What happened here proved to be part of a larger pattern. “The decay of the urban centers, the growing number of African-American people who lived in the inner city and the decision by corporate interests to pull out of that market in terms of movie theaters—it simultaneously happened in many places,” he explained.

“I was surprised by the concerted effort by the business establishment and the first Daley administration to shut down these theaters because they were fearful of large numbers of black teenagers in the Loop,” he said. Concerned about writing the book while the second Mayor Daley was still alive, Butters remains curious about the current lack of theaters in the area. Block 37 on State Street stands at the intersection of many of the demolished theaters. Its original plan included a movie complex as part of the indoor mall, but it was not built.

“I wonder if there was the fear that it would attract black teenagers. I saw the same thing in Kansas City ten years ago. They built an upscale movie complex and kids starting coming in, and suddenly they had this policy where to see a movie you had to be eighteen no matter what the rating was. It was designed very specifically to stop black teenagers from hanging out in theaters.”

AMC is scheduled to open a “Cinema Suites” in the mall at the end of this year or in early 2016, offering a dining and movie experience to people aged eighteen and over. It will be the first commercial cinema in the Loop since the 1980s (though the art-house Gene Siskel Film Center opened in 2001). 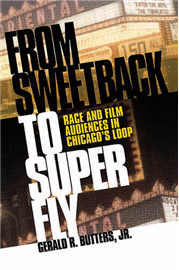 At the height of the Loop cinemas’ popularity, major black actors and musicians attended premieres of black-themed films, attracting large audiences and increasing box office figures. The independent black film “Sweet Sweetback’s Baadasssss Song” outperformed every movie there in the summer of 1971. Kuumba, an influential black arts organization that included poet Gwendolyn Brooks, considered the film exploitative and condemned it. The film is said to have triggered a subsequent trend in cheap, black-cast films made by white Hollywood, known as blaxploitation movies. The book looks at the genre’s impact on black spectatorship, the fear of middle-class white Chicagoans and the impetus for “urban renewal” and subsequent preservation efforts.

Butters combines historical fact with lively personal accounts. “I had to interview people who were there at the time. It was clearly such a visceral experience for them. There was a collective call and response with what was happening on screen. The audience was as much a part of the experience as the movie they were going to see.” Most people he interviewed commented about rats and mice scurrying across the floor while patrons watched movies in the decrepit cinemas.

The book took eight years to research and write. Butters recognized a gap in historical study of Chicago after 1970. “I was extremely lucky to interview the long-time entertainment editor for the Chicago Defender, Earl Calloway. He knew everybody who was anybody in black entertainment in Hollywood. Also Timuel Black, a civil rights pioneer, gave me a lot of information. I hope there is a renewed interest in the history of Chicago from the 1970s on, because we need to interview individuals while they are still alive.”

This detailed cultural account will appeal to people who lived in Chicago in the seventies, movie goers, preservationists, public policy makers, journalists and historians. Butters’ next project is an anthology coming out next year, “Beyond Blaxploitation,” co-edited with Novotny Lawrence.