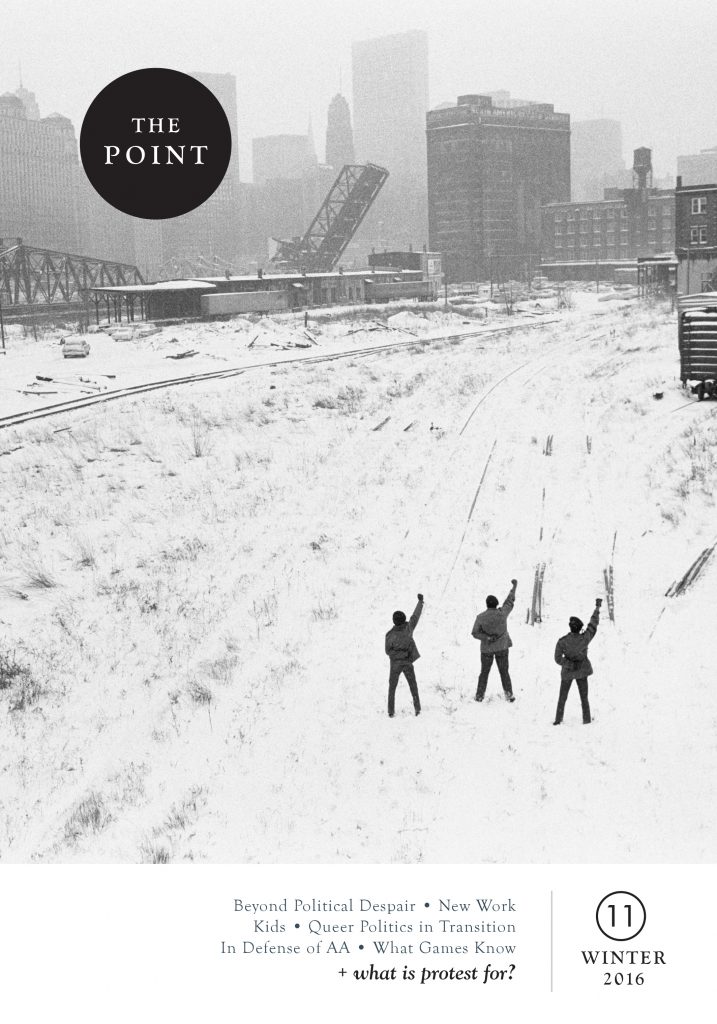 Original, witty, and rewarding, The Point magazine was created in 2009 by three University of Chicago graduate students and “founded on the suspicion that modern life is worth examining.” Playing on the word point and named after Chicago’s South Side Promontory Point, the semiannual publication goes far beyond our city’s borders in scope. All issues are made up of essays, a symposium on a topic chosen by the editors, reviews, artwork and an editors’ letter outlining the issue’s theme.

In Issue 11, the editors write about politics. In “On Purity,” they suggest that it’s impossible for ideals to remain uncorrupted, that “the ability to build an effective political movement, in addition to a passionate one, might depend on cultivating the kind of convictions that are able to survive contamination.” What sort of convictions might these be? The writers in this issue address that question.

The essays in The Point run deep and broad. For example, the changing language of queer theory by Adam Morris in “Better Now?” explores his personal experience of coming out within a historical context, while reflections on the external gaze and its impact on women drive Sophie Beck’s “Returning the Gaze.” Molly Lynch’s “Bad Spirits” describes Lynch’s awakening to her white privilege while joining a protest over the death of Freddie Gray in Baltimore. Other experiences in movements like Occupy, Black Lives Matter, Climate Change Awareness and the 1960s anti-war movement are explored in the symposium “What is protest for?” It includes the brilliant “Political Faith,” by Oded Na’aman. He weaves together Ta-Nehisi Coates’ and James Baldwin’s views of black oppression in America with his own experience of Israeli and Palestinian activists working together. (Natalie Black)

Issue 11 of The Point is available online or by subscription at thepointmag.com. On Thursday, February 11, The Point hosts “what is protest for?” a panel discussion with Bill Ayers, activist and educator, Janae Bonsu, organizer, Black Youth Project 100 Chicago, and Charles Mills, professor of philosophy, Northwestern University, at Jane Addams Hull-House Museum, 800 South Halsted, (312)413-5353. Doors open at 6pm for 6:30pm start. Free.