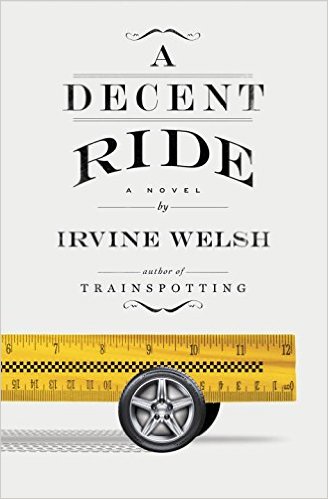 Scotland-born Chicago author Irvine Welsh, renowned for “Trainspotting,” now gives us his tenth novel, “A Decent Ride.” Named his “funniest, filthiest book yet,” it’s definitely a book for lovers of the bawdy and a rollicking good time, not for the faint of heart.

Edinburgh cabbie “Juice” Lawson returns from Welsh’s 2001 novel, “Glue.” It’s now 2011 and he continues as an incorrigible womanizer and boozer. When Hurricane Bawbag comes to town—a symbol of chaos and disruption—mayhem ensues. All is topsy-turvy. Those who ordinarily hold sway are outwitted by fools. Reality TV and business mogul Ronnie Checker finds himself at the mercy of his lowly cabbie. The bullies at The Pub With No Name are injured by Wee Jonty MacKay. Interactions occur between unlikely combinations of people: upper classes and lower, young and old, parents and children, siblings, the living and the dead. Eccentric behavior prevails and sacrilege abounds. Lawson invites a young woman about to jump from a bridge for “a ride” and picks up another at a sex addicts’ meeting. He desecrates a grave, pays a prostitute to give his hospitalized father a hand job and urinates in the old man’s saline drip. Things turn upside down when Lawson’s doctor restricts him from sex and alcohol. For a huge span of the novel, Lawson is celibate and sober. He participates in the most unusual behavior—for him, at least. He takes up golf, becomes an avid reader, helps a prostitute escape to cleaner living, spends time with his son and daughter, tells them he loves them, and acquires some generally enlightened points of view.

One of Welsh’s strengths—aside from illuminating some of humankind’s baser impulses—is giving voice to multiple characters. Writing from these different vantage points is part of the charm of “A Decent Ride,” and it evokes empathy for certain characters which might not be accessible otherwise. (Amy Danzer)