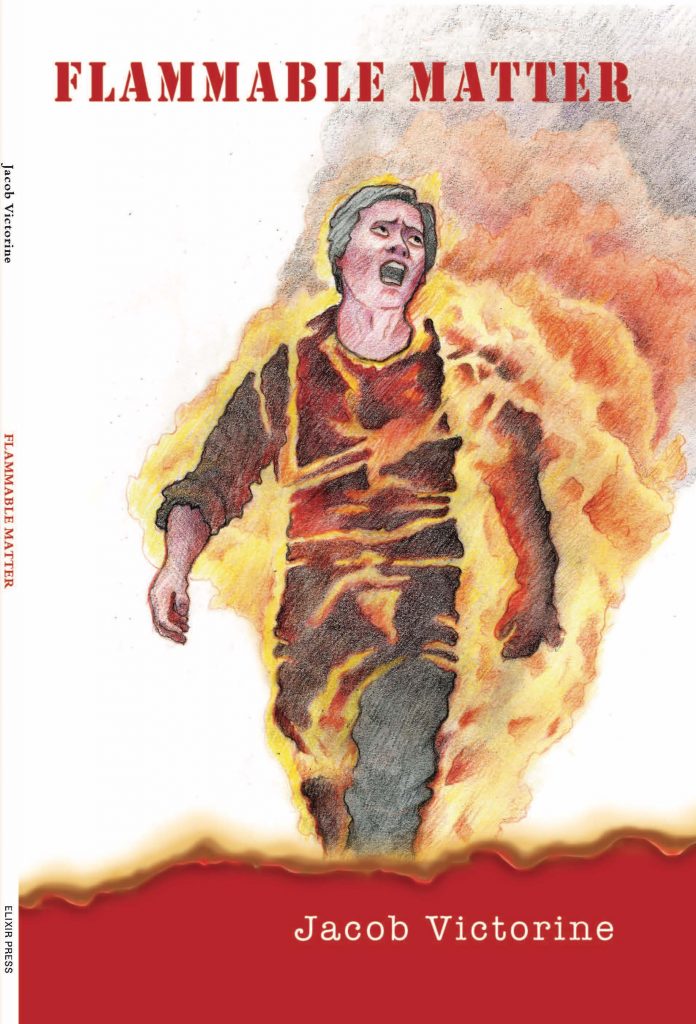 In his first collection, Jacob Victorine writes devastating poems about humans burning. Winner of Elixir Press’ Editor’s Award, “Flammable Matter” memorializes victims—named and unnamed—of fire. Some received media attention when they immolated themselves—monks lamenting Chinese occupation of Tibet, Tunisian food-sellers protesting heavy-handed government forces, and Chicago’s Malachi Ritscher railing against the Iraq war. Some are etched in our collective mind’s eye—like those photographed plummeting from the Twin Towers on 9/11, when the author was a teen growing up in New York. A small boy died in a house fire when playing with matches. The author’s mother, eight at the time, never forgot.

Victorine creates lyric work from fragments of family stories, Ritscher’s self-penned obituary, Richard Pryor’s comedy routine about setting himself alight, government advisories and news reports. One poem, “The Helicopter Concerto” is a multi-part contrapuntal formed from an interview with the poet’s father, a Vietnam veteran. Lines from media comments sections thread through the collection, providing a chorus of interjections, critique and conscience. Humans are messy, complicated and not always compassionate.

This taut, haunting work reminds us that humans are fragile—”I hear ash/watch the spine’s hollow wick catch/the flames of black bones/irises murky and/darkened with dense blood.” Political, it demands that the reader considers the forces that lead to citizen deaths. Philosophical, it poses questions about the ethics of turning other people’s pain into art, reminiscent of Susan Sontag’s “Regarding the Pain of Others.” Whose stories are these to tell and what elevates these poems from disaster porn? Victorine anticipates and engages with these questions. “Can two hands take/without intention? I write without permission—/miles and bodies mounting in fonts.” Poetry has its limitations, he acknowledges. He can bear witness, with the risk of seeming like a voyeur. In the poems, bystanders are caught watching, on the scene or scanning media images, and commenting. “Yes, the world is listening,” becomes a refrain—in watching, we must also listen to the messages left and not forget those who have gone. (Toni Nealie)