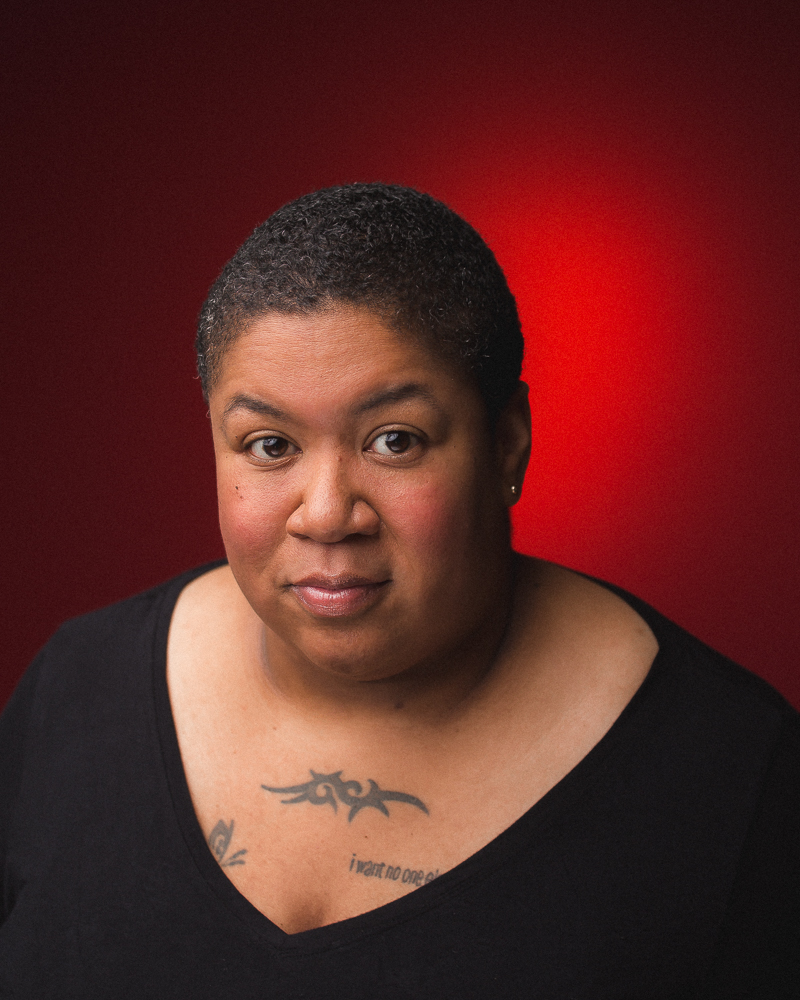 Few writers could describe their diseased ileum, dirty panties, lack of accomplishments and general brokenness on the first page of their debut essay collection and, three years later, still pack a bookstore for a reading. Yet, when Samantha Irby appeared recently at Women & Children First, her standing-room-only audience included everyone from teens, over-fifties, queer, straight, multi-ethnic and the unemployed to medical students, aging teachers and hijab-wearing, tote-briefcase-backpack-carrying fans. Irby’s best-selling “Meaty” was and still is the perfect complement to her popular blog “Bitches Gotta Eat.” Read on to learn what else she has to say (all in lowercase, via email, of course).

What have you been doing since “Meaty?” A new book? Television?
1 i have been trying to be vegan, which someone should throw me a fucking parade for. i had meat a couple days ago though. and cheese. so maybe hold off on the confetti for now.

2 currently i am finishing my second book, cheerfully titled “everything is garbage.”

3 abbi jacobson of “broad city” fame read and loved a bunch of my stuff and approached me a year ago about developing a television show with her. i didn’t respond to her email because i am the worst and also i was fairly certain that i was being catfished, so she emailed me again like “DUDE COME ON” and i wrote her back and we got started. i can’t say much, but we just spent a few days in LA trying to get some people in shiny offices to buy this amazing thing we created and i still almost can’t believe it’s real.

What is the book about?
i am a one-trick pony: more essays about how horrifying it is to be me in this lonely, cruel world.

Is it true that you carried “Chronicle of a Death Foretold” in your backpack at all times (as described in “Meaty”)?
i’ve read some marquez but NAH. currently living in my backpack are an advanced copy of “shrill,” lindy west’s amazing new memoir, and “we love you, charlie freeman” a novel by kaitlyn greenidge who is so sharp and smart and funny.

How do you characterize your work and how has it changed?
“butt stuff for idiots.”

I heard your wonderful essay about the strap-on. On the surface, it was cry-out-loud hilarious and kind of crude, but the thread underneath was tender, thoughtful and more sweet than I associate with you. Is your new work going to be more complexly layered in structure and style? “Meaty” seemed to draw more on blog style, but that essay was much more “essayistic” with its digression and reflection.
i just laughed so hard i puked down the front of my shirt because wonderful is, like, a jane austen word and that piece you heard was about trying to fit a big silicone dick into a plus-sized harness. THANK YOU SO MUCH.

i’m sweet, toni. and i’m growing up. i can’t keep riffing like an asshole three years after the first book came out. i had to read essays that smarter people have written and start writing paragraphs instead of lists, plus i have an editor now who makes me elevate my work and consider new things. the real is that this book is being published by a big, fancy house and going to have more eyes on it and i don’t want to be out here looking foolish. i have it in me to produce thoughtful, nuanced work and i want the new york times to see that. i mean, i want my readers to see that.

The cranky, brash persona on the page/screen—how carefully curated is that? You seem pretty content with marriage—has that changed the tenor of your writing?
oh no girl everything is still stupid and terrible, maybe even worse, and i’m still depressed and easily irritated, so i feel like the writing is pretty much the same. crabbier probably? and i’m making a concerted effort not to swear so much so that people will take me seriously as an adult, which they would NOT if they ever met me in person and saw my actual shoes. i’m a fucking joy to be around; i laugh a lot, i make up songs, i have good manners. but i also hate myself and have been fighting a losing battle with mental illness for my whole life so my outlook can be pretty bleak. but i’m the best kind of cranky. i don’t take myself too seriously and i avoid situations that could potentially turn me into a monster. for example, i hate crowds and grass and fresh air and music you can barely hear, so i would never in life ever go to ravinia. monsters go to ravinia and complain to everyone within earshot about what a terrible time they’re having eating a boxed lunch on a wet blanket, non-monsters like me stay home and chuckle smugly to ourselves at all your sad tweets about having to watch paul simon in the rain.
and my wife is a dream but listen, she goes running every morning and eats raw kale so let’s be honest i kind of despise her. i don’t think too much about crafting an image because that shit can be a trap and the internet remembers everything, but i’d say i’m pretty consistent because my knee-jerk reaction to 99% of things really is “ugh.” and that’s the place my work stems from, the UGH.

You delight in and express disgust at the physical—in “Meaty” and in the strap-on essay. I was crying with laughter at the W&CF reading. The dude next to me was not amused. There were also some young people who looked super uncomfortable. Who is your audience? What response do you want from them and why?
OH MAN it kinda bums me out that people were uncomfortable but yo that’s on them. do you think if i hadn’t been actively sweating on the audience they might’ve had an easier time listening to the riveting description of women rapidly approaching middle age getting it on? who doesn’t want to hear a lukewarm lesbian sex story!? loosen up, angry white dude. and toughen up, young people. fat lesbian sex is going to be the least of your worries once those student loan deferments run out and you really learn what a philosophy degree is good for in real life.
a lot of people hate my shit and i don’t blame them. but i write my stories for women and queers and if other people like them too that’s dope. my writing is for anyone with $15 and a sense of humor, because i want what every egomaniac crying out from the bottom of a deep well of emotional despair wants: fawning praise, unwavering devotion, and 11% of net profits.

Why do you write? Where does the satisfaction lie most? Some people like inventing and generating, others like the revision process more—any preference?
my motivation, as it was in the beginning and continues to be today, was to impress one specific person. i definitely prefer the writing part; my goal is always to make myself laugh, and that’s still the most fun part of writing. revisions make me feel bad, like i got something wrong. i obsess over my work before turning it in, and even then i feel like if i just had another hour with that piece i could make it so much better, so when it comes back with corrections i feel like i’ve failed. save for a couple of essays that i recycle again and again for readings, i don’t read anything i’ve written after it’s been published. i get extremely self-conscious about my work, and once i hand it over and someone else has read it it becomes almost embarrassing to me. i am an anxious person in general and editing my work, or responding to criticism of it, makes me want to die.

I have to be on a panel about the “Chicago Canon.” What makes a classic and do you think your work will be? When can we tell what will be classic, and does it matter?
i hope that people will eventually forget i exist and i can chill in my elastic waistband jeans in peace. my plan is to ride this wave until someone new gets a book deal off instagram or tumblr and pushes me into obscurity. as for the question of what makes something a classic i will counter your question with one of my own: you know i only went to high school, right? LOL I HAVE ABSOLUTELY NO IDEA.

Did you see the Ta-Nehisi Coates piece about celebrity in The Atlantic? Just remember, CHICAGO LOVED YOU FIRST.
omg YES I DID.
don’t worry, [my wife] lives in michigan so i’m moving to kalamazoo.
you can’t be fat and mean in hollywood, so fuck that noise. let me stay in the land of the casserole.