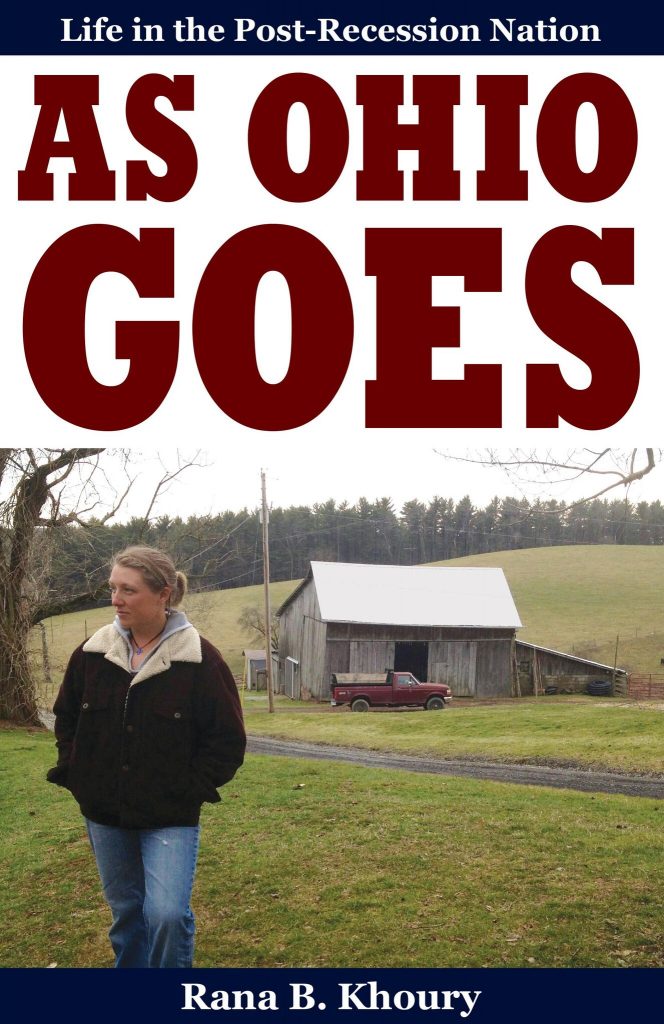 If you are grappling with election issues and trying to understand why voters are drawn to polarized candidates, “As Ohio Goes” will provide enlightening background. Rana Khoury traveled through her home state, Ohio, and interviewed working men and women to illustrate the challenges of life after the “Catastrophic Recession.” Ohio is important as a swing state and its diversity typifies the United States. As Ohio goes, so goes the nation.
Khoury writes about the “unwinding” faced by her interviewees, a loss of security following job losses, foreclosures, health costs or retirement. Not all of her subjects were hit equally, but their stories illuminate trends of increasing inequality and declining standards of living. Through Eric and Colleen, Rhonda, Dawn, Greg and others, the reader glimpses wide-ranging economic impacts. Some subjects enjoy financial boosts, such as the chestnut farmer who leased his land for mineral extraction, while others face enormous debt and bankruptcy.

Interspersing their stories are solid details charting the macro trends of the past decades. Deregulation of the financial markets, globalization, deindustrialization and the reduction of top tax rates transformed life for the top one percent of earners. Their incomes grew by a whopping eighty-six percent between 1993 and 2012, while incomes of the ninety-nine percent grew less than seven percent—apart from those whose wages actually decreased. “By 2030, if this pattern were to continue at its current pace, the top ten percent of U.S. income earners could command 60 percent of all national income,” Khoury writes.

It is sobering and engaging. The author threads statistics and policy details through the personal narratives, so the reader never feels bogged down. Khoury is a doctoral candidate at Northwestern University and her writing is succinct and breezy rather than densely academic. She makes a clear case for the commonality of her subjects’ experiences and the shared fates of citizens. She wonders at the country’s course. “Who is paving it, and where do we want it to go?” she asks—and so does the reader. (Toni Nealie)

“As Ohio Goes: Life in the Post-Recession Nation”
By Rana B. Khoury
The Kent State University Press, 200 pages $19.95