Alex Nall has been a staple in the local indie comics scene for years, releasing 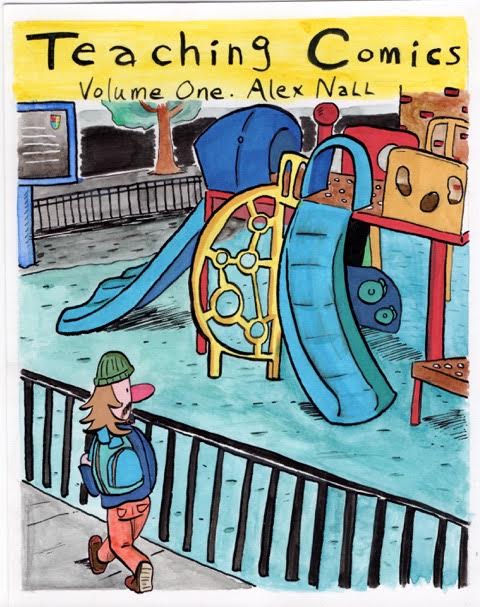 minicomics and helping organize Chicago Zine Fest. He released his full-length book “Teaching Comics” recently at the Chicago Alternative Comics Expo, CAKE, after a crowdfunding campaign through Indiegogo (disclaimer: I donated.) The book follows Nall’s experience as a first-year teaching artist in Chicago Public Schools and represents his most cohesive work—a mix of laugh-out-loud and bittersweet reflections on everything from recess patrol to budget cuts to those magic moments when his students delved deep into their own creativity. I talked to Nall on the phone about self-publishing, talking donuts and the magic that occurs when kids make art.

What will you remember most from your time teaching?
No matter how stressful or chaotic a week could be, I always knew there was one hour every week where ten kids and I are going to make comics. And we’re going to have a lot of fun doing it. They’re going to really surprise me with the depth and variety of sheer imagination they have. I’m going to really miss seeing their work every week.

Why do you think arts education is important in public schools?
I had a student who, every comic he did, had a talking donut. It was the coolest thing, because you could tell every week he was coming back with more stories and more things to say in that character. As an educator, that makes me feel like, “Wow, he’s honing in on a voice. He’s honing in on an identity through this drawing.”

I recently did a comic with six panels and no dialogue. It’s of a little boy who is watercolor painting. As a teacher, there are so few moments where there’s silence in the classroom. When you get it you’re actually able to process, “Oh, wow, they’re working. They’re actually concentrating on the work.” It felt good to take the lens off me and point it at someone else. A second-grader painting. It made me feel like those six panels, that could be the thesis of the whole series. Just watching kids work and create.

What made you go the crowdfunding, self-publishing route?
I support campaigns for people who are doing great stuff and want to get it out to the world. I feel like traditional publishing is kind of going on the wayside and I’m not really that upset about it. When I was a kid, that was all I thought about: “Oh, I’m going to be a published writer. Someone’s going to publish my stuff.”

Now, I feel like it’s better this way—like, we’re all the publishers. I know exactly who was involved with donations, exactly who at the printer I was working with, who was designing the book. It felt like it was my project. I knew at the end of it, any mistakes are mine and I can wholly accept that. (Megan Kirby)