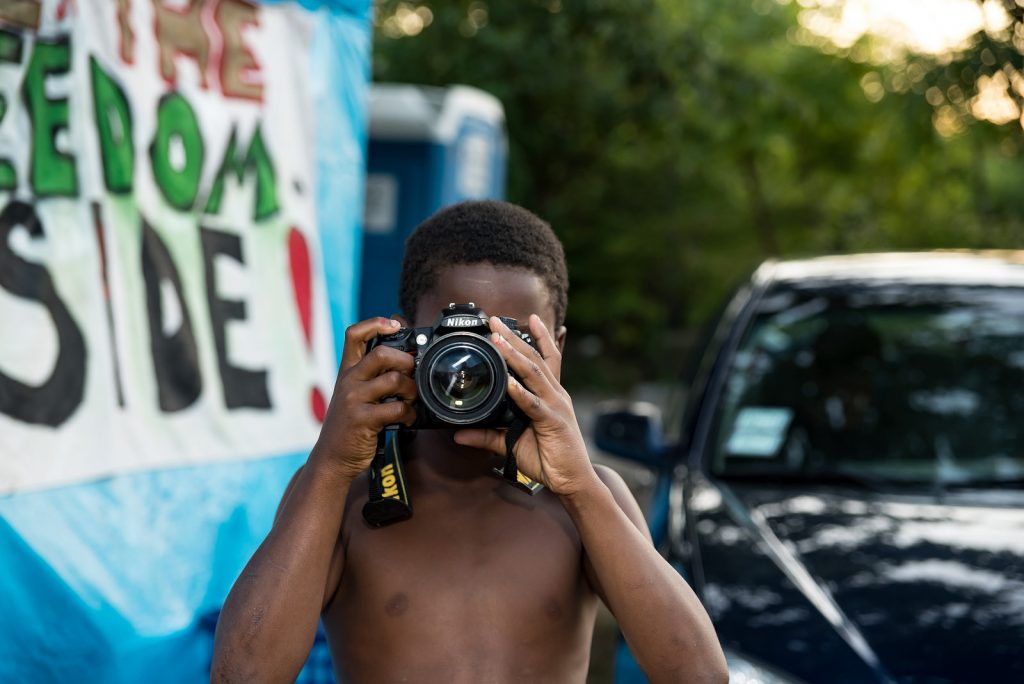 A child takes a photo, turning the camera’s gaze upon others similar to the way the camera is all-too-often turned on them at Freedom Square in North Lawndale. Sarah-Ji, the photographer who captured the child’s gaze, privileges the gaze of the children and the community. Photo:/ Sarah-Ji.

When asked to think about what it was that I was looking forward to in the fall concerning literature and creativity in Chicago, I felt embarrassed at my first answer because it was un-rigorous, banal, primal and ineloquent. Or, so I thought. Like the fictitious Sasha Thumper in Outkast’s “Da Art of Storytellin’ (Part 1)” when asked “what she wanted to be when she grew up,” her response underneath the stars of the story was simple: alive. This fall, I hope to be alive, particularly after this most recent killing season—the execution of Philando Castile in Minneapolis, the execution of Alton Sterling in Baton Rouge, the execution of Korryn Gaines in Baltimore, the execution of… you get the idea. Because staying alive in America for African Americans remains one of the most rigorous intellectual and aesthetic endeavors of our history, lives and future. It is the problem of the invisible and, yet, being so visibly invisible… negligible.

The problem of the future is the problem of invisibility which is also the problem of hypervisibility, which I might have a few things to say about as a black man living in Chicago at the beginning of the twenty-first century where less than a mile and a half from my house the Chicago Police Department at Homan Square disappeared over 7,000 arrestees, mostly black and brown, in an “off-the-books interrogation compound” in the North Lawndale community, a community that I live in, a community wherein the police camp out in front of my house, following me when I leave to go to work or the grocery store or the gym or the lake or… you get the idea. My future and its invisibility is not merely my story, but the American story of its history and its future.

The problem of looking forward means we must always look backward simultaneously. As writer Walter Benjamin responded to Paul Klee’s painting “Angelus Novus”: “His eyes are staring, his mouth is open, his wings are spread. This is how one pictures the angel of history. His face is turned toward the past. Where we perceive a chain of events, he sees one single catastrophe that keeps piling ruin upon ruin and hurls it in front of his feet.” That simultaneous gazing might prove an impossible task because the explosions and desecration of the past blow us into the future with our backs to it, our eyes mired and staring at the destruction of the past. So when asked what it is that I am looking forward to in the fall, in terms of literature and creativity in Chicago, I can’t help but think of this most recent killing season, what the past has incubated and requires addressing, what is invisible must be visible and a little less negligible.

This accounting again turns me to Homan Square, but not so much the Homan Square of the domestic black site but the dusty, rock-filled lot across the street, a lot filled with tents on its eastern edge, a makeshift kitchen on the right, a library at its northern border, black children running about the tents at times and other times listening to elders and parents discuss American, state-sanctioned violence against black and brown bodies and what can be learned from the anti-apartheid movement in South Africa. Activists from a wide-range of groups—the Let Us Breathe Collective, Assata’s Daughter’s, Black Youth Project 100, to name a few—and parents, community members, artists, playwrights and yoga instructors have staged a sit-in in the lot across the street from the interrogation compound to protest a city ordinance proposed by six city aldermen to “expand the city’s hate crime laws to protect” police officers and other first responders—the so-called Blue Lives Matter Laws. This proposed ordinance, a response to protest movements like Black Lives Matter and activist organizations like the Let Us Breathe Collective, handcuffs and restricts speech and, concomitantly, the response to the unlawful murdering of black and brown people by the police. These activists, artists and community members in North Lawndale are calling the ground they occupy Freedom Square.

Through the very act of staring back at the domestic black site across the street, performing what bell hooks calls “oppositional gazing,” defiantly witnessing what power and repressive state apparatuses would not want you to take notice of, these activists and community members imagine and enact an admission and a refusal. The admission: that they are free and address themselves to freedom. The refusal: that they will not wait for a beneficent alderman or police chief or mayor or some other state employee to correct the State and its deleterious actions. They refuse their infantilization through the act of making a public, a polis, of a future that does not require oversight or policing. Furthermore, these activists and community members critique and counter the oppression that occurred and occurs in the police headquarters through providing the community what the city and state won’t—free food and a space free of racism, homophobia, ageism, sexism and ableism.

These actions, protestations and occupations are types of texts of the future because they imagine a life, a community, a world much in the way poets and writers imagine worlds and world-building. They, we, attend to language, to language’s ability to conspire against the normative, conspire against and subvert the very forms and apparatuses of oppression and repression that seek to drown the body and the imagination. The subversion is performed much in the way that a piece of fiction or poetry is made: by asking the question what if? What if we can make a community in which community members held one another to ideals of civility and principle without designating a “force” or “unit” to perform this function? What would that look like? What form would that take? What if a community of color is not understood from the position of “lack” but “enough?” These questions, though they seem to be concerned with civics and social life, are questions of art-making as well, questions of language. For instance, lately I have been thinking about the intellectual life of enslaved Africans in America. Rather, than thinking about the slave’s life as merely existential dread (which it was), there were also moments that enslaved Africans imagined, created and inhabited their lives that contradicted and subverted their oppressions. How and what did it look like? Activism teaches us how to find fecundity and possibility in abjection and abject places.

With each action taken by various activist groups all over Chicago, whether it’s the occupation of Lake Shore Drive or the creation of a free space at the edge of a zone of oppression, like Freedom Square, I learn something different about artistic form, inquiry, agency and how to deploy the materials of poetry toward a poem that has yet to exist. In this way, dreaming occurs while waking, a surrealist endeavor I’m sure; however, it is in a long history of surrealist endeavors like slaves imagining themselves free. These actions consistently posit what if and then plunge into the darkness.

What do I look forward to this fall in the Chicago literary scene? More freedom, more action, more learning from our city’s best social practice artists.

Roger Reeves is the author of “King Me.” A recipient of the Pushcart Prize, a Ruth Lilly Fellowship, an NEA Fellowship and a Hodder Fellowship from Princeton University, Reeves is an assistant professor of poetry at the University of Illinois at Chicago.