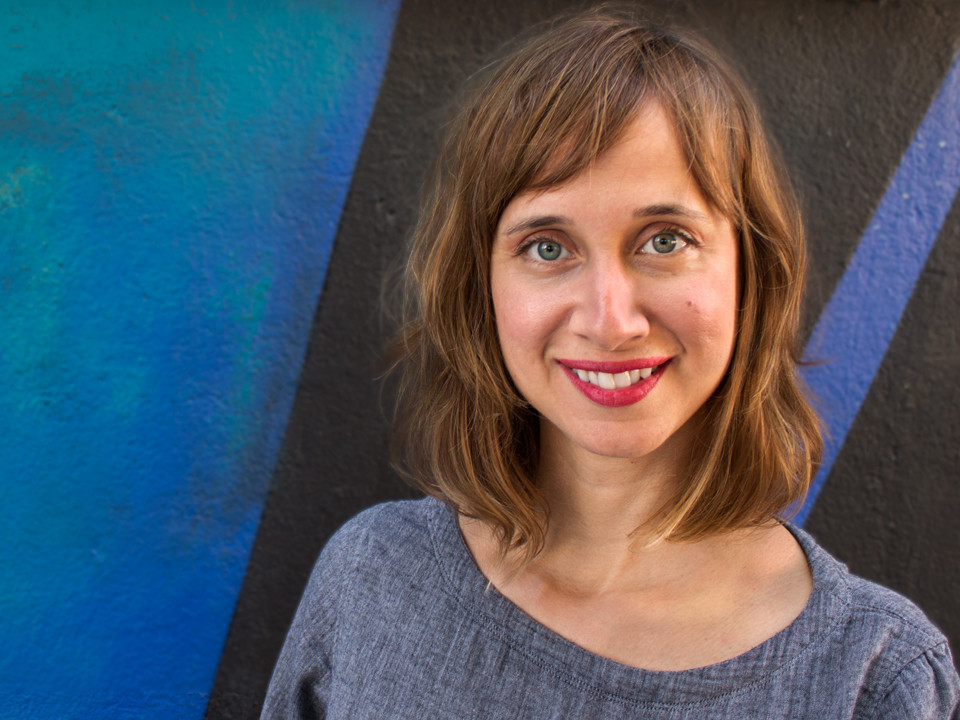 Margaret Wappler’s “first real writing job” after the Columbia Fiction Writing program was first as an intern, then later as an editor at Newcity from 1999 to 2002. Her first novel, “Neon Green” was recently published, an emanation of science-fiction-family drama-social satire comedy set in suburban Chicago in an alternate-world summer of 1994. A flying saucer lands in a backyard in Prairie Park, “a two-mile slice of dream community, moderately affluent, educated, safe and green.” The plot of land belongs to Ernest, the eco-savvy patriarch of the Allen family, who frets about what damage its presence and behavior might do to his family and his comfortable surroundings. “Ernest had a kind of environmental Tourette’s,” Wappler writes, “Where he was compelled to remark if something didn’t adhere to his principles.” Wappler answered a few questions about her career, writing habits, suburbia and influences to be overcome, via Gchat.

Congratulations! Nice to see a book by a former colleague with a cover the color of jealousy.
It’s designed to provoke that response!

There’s at least one classical Newcity copyediting bugbear in your book.
Oh no, a mistake? 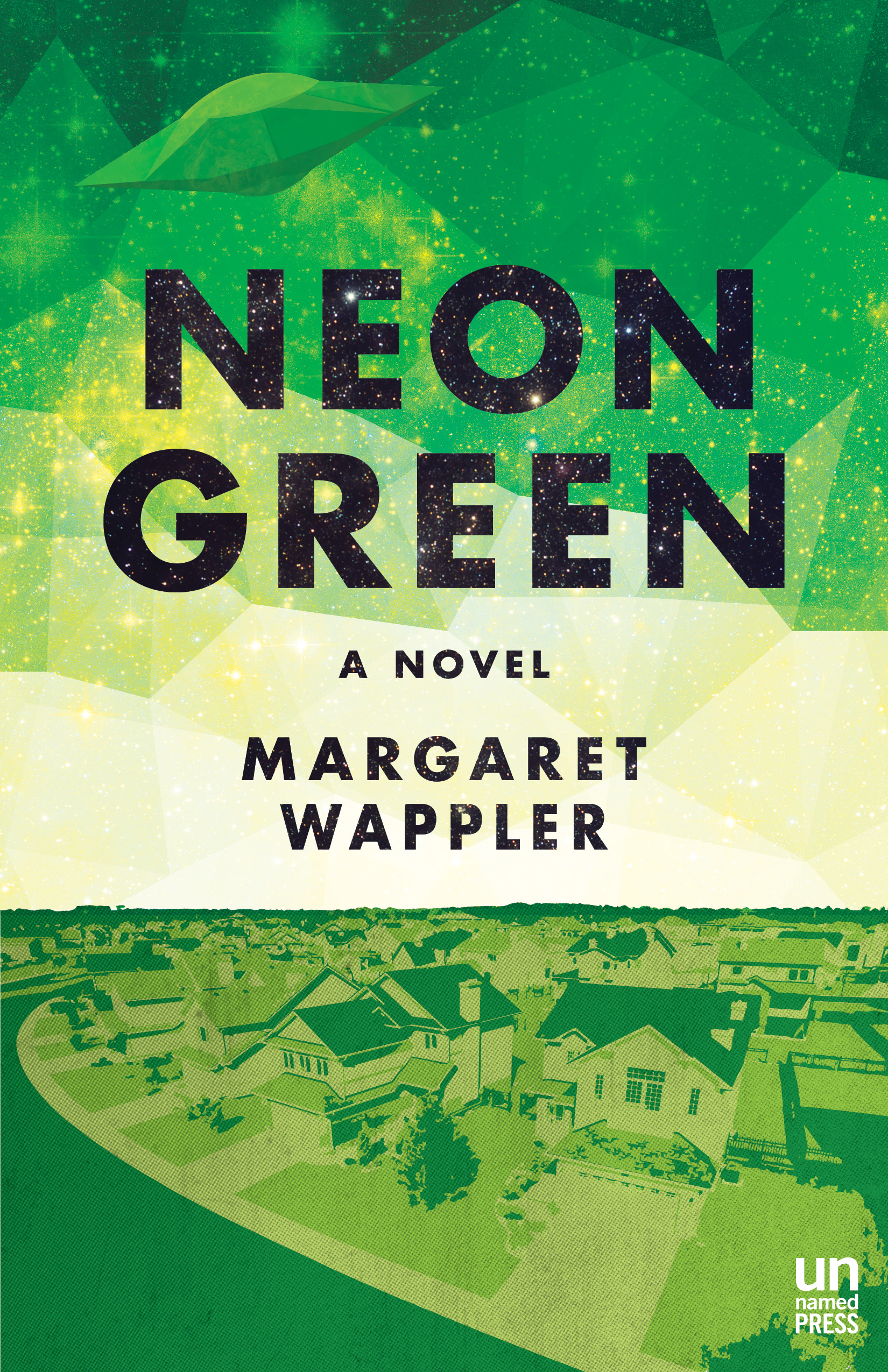 That’s some time put in there. How did this enterprise fit into your daily work schedule? Was it a diversion, a determination… what was it doing there waiting for you each day?
For the majority of the time I was writing the book, I was a full-time staff writer at the LA Times. This was a blessing in the sense that I was writing so much every day, what were a few more hours? But also a curse because I spent many days with a brutal schedule that, at its worst, would mean fourteen hours on a computer. I have a very dear friend, Jade Chang (whose wonderful novel, “The Wangs vs. the World” is coming out in October), who I would meet about three or four times a week at various cafes after work and we’d write together till about ten or so at night, and then for a few hours a day on the weekends. If I hadn’t been accountable to someone else, for showing up and working on this thing, I don’t know if I would’ve finished. Also, when you’re writing lots of short things for a newspaper, it’s really nice to work on a long, “slow-cooked” piece. It was my respite.

And with a friend knowing your progress or lack thereof, something other than nagging guilt and flagging self-esteem to get your motor going.
Yes, we encouraged each other and just on a plain social animal level, I find it easier to write knowing someone across the table from me is working toward the same insane goal. It also helps to drink beer with your friend when you’re finished.

Since it predates your Newcity years, the 1994 setting of the novel would be your own teen years in Oak Park?
I’m slightly older than the teen characters. I was eighteen in 1994. In general, I feel like Newcity was one of my first educations in pop culture, really steeping myself in it and seeing it fly by on a week-to-week basis.

So you begin in the alt-weekly heyday of Newcity, then the LA Times cultural coverage, as well as diverse freelance, and now, this novel just happens?
Well, in some ways, I wrote “Neon Green” in opposition to covering arts and culture, which can seem very ephemeral and also rooted in someone else’s ideas of what they want to convey, as opposed to my own. I went to Columbia’s Fiction Writing program and got into cultural coverage as a way to continue my education. You can learn a lot from talking to writers, musicians, filmmakers, etc. What worked for them and what didn’t?

How did the germ of this family story arrive, then?
The germ came from an image I had—a family gathered in a backyard, observing a flying saucer that had just landed. Instead of being shocked or scared, each member had a different reaction. And when I zoomed in on Ernest, the patriarch, he looked totally put out and over it. Something about that reaction made me laugh and want to know more. I’ve always been interested in family units as well. How they work or don’t work, the undercurrents of them, the ways in which a family can be undone or challenged.

A certain flavor of science fiction lets you be clever and capture a world through smaller details, like Ernest’s behavior. But you’re dipping a couple of fingers into Don DeLillo territory, the fearful father, the family dealing with cancer… even feeling alien in the company of aliens! Were there influences to burn through or get over or steal from shamelessly?
I definitely used Don DeLillo’s “White Noise” as a touchstone. I deeply love that book, the feeling of the book and I’d say it showed too much in my first draft. I had to rewrite all these shamelessly DeLilloesque sentences and make them my own. I also thought about things I could uniquely bring to a sci-fi/speculative book. I really wanted a deep sense of emotion, a warmer atmosphere in general. DeLillo can sometimes be too emotionally chilly for me.

How did you warm up the story, then?
Well, nostalgia is interesting because it’s about loss, but also craving that loss. Reveling in the wistfulness, the thing gone past. All of the characters long for something from the past, or an idea of the future, and even more so, a deep connection with the people around them. On a very basic level, knowing what a character really longs for, and really misses, brings you closer to them.

And as readers we’re also situated in a past/present/future perspective, in that the family’s “journaling” of how they deal with the alien presence in their backyard is like texting, messaging avant la lettre. The 1990s setting saves you from the internet getting in the way of the story, but you’re also cleverly anticipating it.
Yes, 1994 was a very deliberate choice in terms of the Internet. It’s there, it’s right on the horizon and as readers we know that the Allen family’s life is about to be very different in a few years, purely based on Internet life coming in and taking over. The way that time passes, something so basic to the texture of daily life, is about to be so radically different. The fact that we know that and they don’t, there’s something so touching about holding that knowledge for them.

You know the Chicago setting from experience, that’s a virtue. What play did you hope to make toward or against expectations of how suburbia is customarily depicted?
Right. Suburbs, by and large, are painted with a broad brush. Everyone’s trying to keep up with the Joneses, achieve the American dream. There’s also the idea that these spaces don’t tolerate differences very well, that it’s all about conformity. All of that is true, to a certain extent, but I also think there’s a different story about the suburbs that doesn’t often get told. That many of them are quite idiosyncratic and strange. You can drive through a neighborhood with cookie-cutter houses, but when you start looking into who lives there, that’s when it gets interesting. People have messy lives, passionate notions, weird ideas in the suburbs just as much as anywhere else. Especially when you consider how many of us grew up in suburbs at this point. Can that many people really all be the same? The “Prairie Park” of the book is a thinly veiled Oak Park. And the kind of liberal diversity that Oak Park prides itself on is definitely present in the book. Sometimes I poke fun at it —a certain kind of eco-affluent household that boasts art made by indigenous cultures and that kind of thing—but I also love it and miss it.

Why did you need this novel?
I subscribe very heartily to the idea that you should write the book you want to read—that hasn’t been created yet. I love science fiction because it gives a reader a certain permission to ruminate, to be philosophical about what’s to come, or what has already passed, but I didn’t want to write a “hard” sci-fi novel. I wanted to crossbreed it with a family story, where you can have those small dynamic moments between loved ones, the kind that can still tug at you twenty years later because you wished you’d said something different. Also, I needed a book to explore the numinous mysteries of life but a book that could also be silly. I kept a phrase, radical silliness, bouncing in my mind for a lot of “Neon Green”’s creation. To me, you can slip in a lot of radical or profound ideas under the cover of humor and general goofballness.