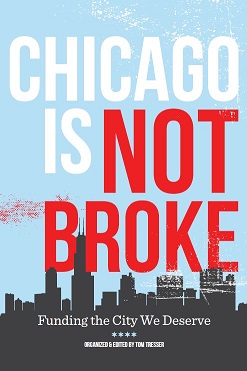 When Mayor Rahm Emanuel tells us the city of Chicago is broke, do we take his word for it? What other choice do we have? “Chicago Is Not Broke: Funding the City We Deserve,” a collection of essays edited by public defender and civic educator Tom Tresser, openly challenges Emanuel’s assertion that budget cuts, tax hikes and school closings are the only solution to the city’s financial woes. The essays examine and ring up the costs of police brutality, corruption, tax increment financing (TIFs) and the disastrous Bank of America interest rate swaps, along with the sums we could collect through tax and policy reforms.

The most illuminating essay, “TIFS—Billions Off the Books,” written by Tresser in conjunction with the CivicLab and the TIF Illumination Project, clearly explains the complicated process by which money collected in one neighborhood gets shifted to another with little oversight. Created during the Harold Washington administration, TIFs were meant to earmark money from property tax increases for struggling neighborhoods, but have become a way of diverting funds away from local schools and toward developments in wealthy districts. The most intriguing proposal comes in an essay by Amara Enyia, a former candidate for mayor, who argues for the creation of a public bank in Chicago (North Dakota has had one since 1919) as a way of recouping some of the thirty to fifty percent of every public project budget that goes toward debt services.

The $5.5 billion the essays purport to find under the city’s sofa cushions would come at the cost of the Chicago way, our shared, seemingly immortal, legacy. Not the easiest thing to imagine. “Chicago Is Not Broke: Funding the City We Deserve” does just that, shedding needed light onto the city’s opaque budget and convincingly arguing that Emanuel’s “poison pills” show not leadership, but a fundamental dearth of imagination and desire to disrupt the status quo. Tresser and company sound an urgent call to activists, residents and number crunchers alike to join “a serious city-wide discussion about what is possible in Chicago.” (Timothy Parfitt)

“Chicago Is Not Broke: Funding the City We Deserve”
Edited By Tom Tresser
Salsedo Press, 103 pages, $12

What’s the cost of corruption to Chicago every year? We can tell you? How much are we pissing away on bad bank deals? We can tell you. How much money spent because of police violence? We can tell you. Want proof that Chicago in NOT broke? Get the book at http://www.wearenotbroke.com. Bring us to your organization or community NOW. Our authors are eager to talk about the ideas in this book. Contact us at info@civiclab.us.