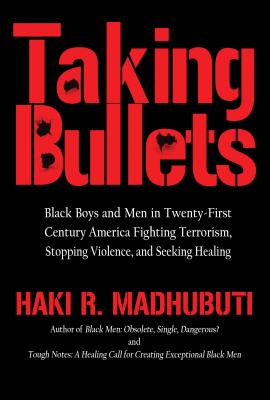 Haki Madhubuti, one of the architects of the Black Arts Movement, has spent a lifetime countering “the deadly ideology of white supremacy/white nationalism.” He began writing his latest book, “Taking Bullets: Black Boys and Men in Twenty-First Century America,” after Tamir Rice, a twelve-year-old boy holding a toy gun on a Cleveland playground, was shot dead by police. The civic conversation boils with race, again and always in America. “Taking Bullets” is a salve and rallying cry, war chant and street knowledge, a literary mixtape in the tradition of W.E.B. Du Bois’ “The Souls of Black Folk” and Jean Toomer’s “Cane.” It comes at a time to guide everybody toward a sane and progressive consideration about what the nation is facing.

In “Taking Bullets,” Madhubuti moves from critical race prose to the poetic line with a master’s pen:

this is our call.
to boys who earned their names suffering spit & fist…
defeat the devil’s wars, burn the torturers play pager,
write your own truths…

For Madhubuti, now more than ever, some answers to the country’s chronic and rabid racism wait in the creation of culture. “Taking Bullets,” as much as it is an analysis and historicization of the white “plutocracy and oligarchy,” is also a manual on the craft of writing and the art of living. Madhubuti, a professor of literature and builder of black-centered schools and pedagogies, creates a blueprint for how to survive, thrive and remain whole in a world bent on one’s destruction.

Toward the end of the book, Madhubuti takes on Chicago and the murder of yet another black teenager, Laquan McDonald. Simple, urgent and elegant, he writes, “We are now in our defining hour. Why do they hate us?” I know Chicago and the country must answer and account for that question. And I know that in Madhubuti’s writing, and life’s work, and most currently in “Taking Bullets,” lie some of the solutions and ways ahead. (Kevin Coval)