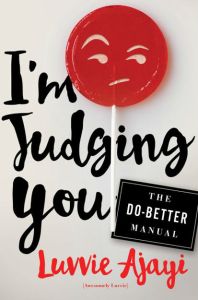 Don’t feed the trolls, people say, but sometimes you don’t realize you’ve put your hand out until they bite. A man tried to insult me on Twitter, following what I thought was a harmless response to his tweet. First he called me a liberal. After presumably looking at my profile, he said, “Writing a blog is work now, wow.” I told him I don’t write a blog, but some enormously successful people do. I was thinking of Luvvie Ajayi.

The winner of many awards, Ajayi is a public speaker, a digital strategist, activist and long-time blogger—the entertaining and sharp voice behind AwesomelyLuvvie.com, which has 500,000 readers each month. She parlayed her successful blog into a debut collection, “I’m Judging You: The Do-Better Manual.” She dedicates an entire chapter to social media and the people who “will make you roll your eyes so hard that you go temporarily cross-eyed.” So here I am now, with Ajayi by my side, reassuring me that my Twitter troll is maybe “some lonely person living in their mama’s basement, scratching their ass, and lacking vitamin D because they refuse to go outside.”

Ajayi’s mission is to provide a guidebook with “instructions on how not to suck” in an era obsessed with pop culture, online sharing and self-absorption. She’s on point in her critique of friendships that suck, bad love affairs, personal hygiene, fame and sex tapes. She pokes at our transgressions while making us laugh at the ridiculousness of anal bleaching and Comic Sans font.  In a sharp admonition to homophobes, Ajayi discusses biblical laws such as eating shellfish, pork and letting your hair look rough. “If you’re going to ignore the rest of those laws, but you’re holding on to Leviticus 18:12 like an Unbreakable Vow from the Harry Potter stories, then you’re being hypocritical,” she says.

“I’m Judging You” is a hilarious Miss Manners for the modern era that segues from froth into serious discussion of the three Rs—religion, rape culture and racism. It’s a perfect gift for a teen, a new graduate launching into the world, or a jaded older person seeking a tune-up on honesty, kindness and virtue. It’s also a reminder of the common good and call to action to do better, to serve others, to do something that matters. (Toni Nealie)