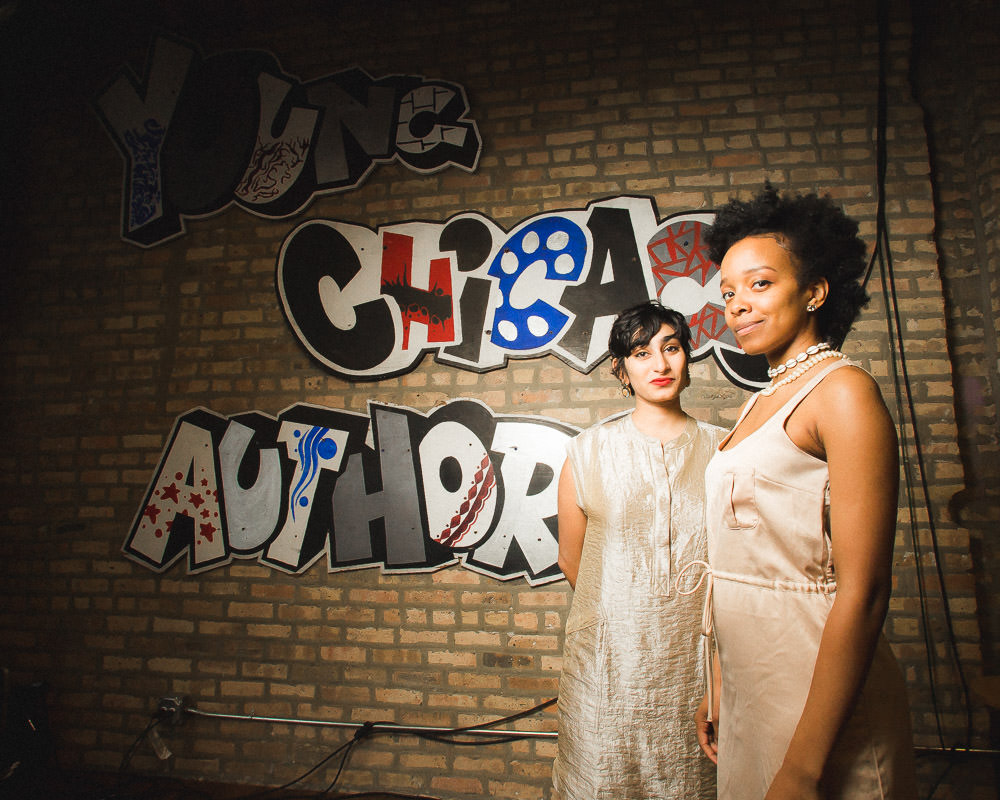 What a moment for friends Jamila Woods and Fatimah Asghar—they’re everywhere, across multiple genres and criss-crossing through each other’s work. Woods, well-known locally as an award-winning poet, songwriter, singer and teaching artist, shot to national prominence with her transcendent collaboration on Chance the Rapper’s “Sunday Candy” and “Blessings.” Her summer debut album “Heavn” features the freedom anthem “Blk Girl Soldier,” a song whose chorus goes off like a quiet grenade:

“Look at what they did to my sisters
Last century, last week
They make her hate her own skin
Treat her like a sin”

Asghar, a poet, performer and teaching artist, recently conceived and wrote the web series “Brown Girls,” which screens on OpenTV, and features Woods as musical consultant and theme-song writer and vocalist. Meanwhile, Asghar’s poem “If They Should Come For Us,” published in Poetry magazine, became the go-to poem after the government imposed a travel ban on Muslims from selected countries. She writes:

She was spurred to write the web series because she did not see a full range of women of color on screen and certainly no one like her—a queer South Asian Muslim woman. Focused on two women from different backgrounds muddling through their twenties, it’s funny, joyful and optimistic, a counterpoint to the politically difficult times that minority women are in. The central characters, Leila and Patricia, are modeled on Asghar and Woods. Both women are part of The Dark Noise Collective, a multi-genre group that has performed internationally, and work for Young Chicago Authors, where Woods is associate artistic director. Their bond is intense. “I think of Fati as my sister. She’s definitely part of my family,” says Woods. 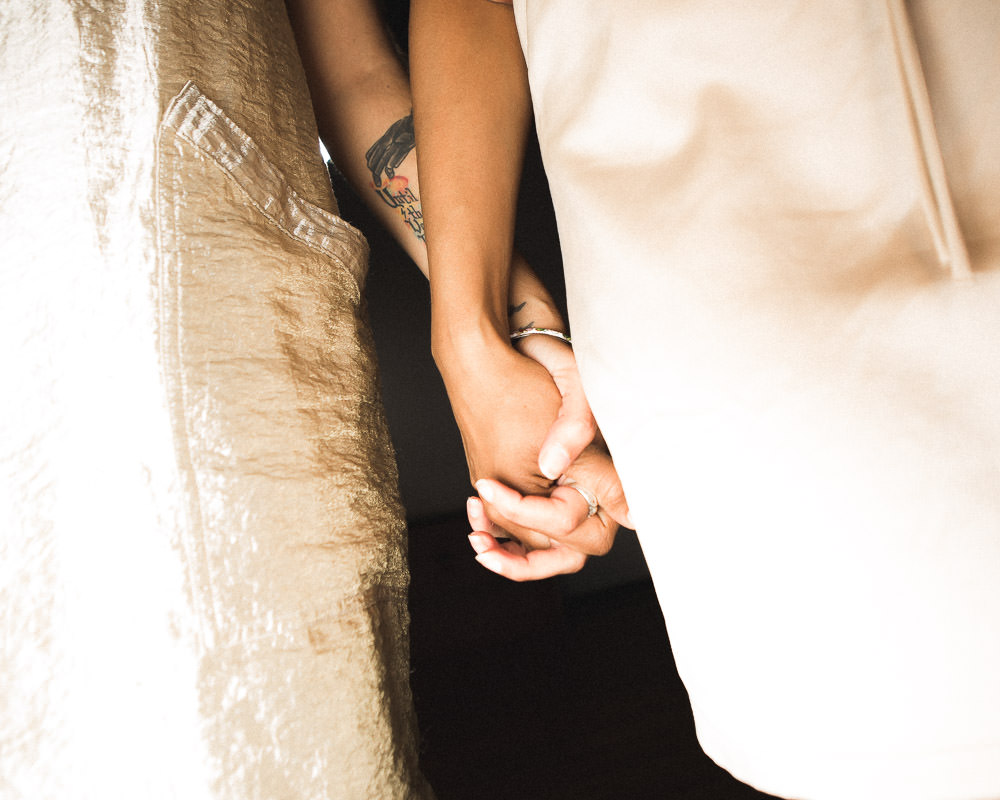 The pair met in Providence, Rhode Island, when they were students at Brown University. Woods got a BA in Africana Studies and Theatre & Performance Studies, while Asghar studied International Relations and Africana Studies. “I never took a poetry class or a music class in college, “says Woods. However, she loved writing in high school and participated in a city of Chicago Gallery 37 summer program. Under the mentorship of avery r. young, she discovered a love of performance poetry. She went to a spoken-word group at Brown and Asghar tagged along.

“I would watch, but I was really nervous and I would never write a poem,” says Asghar. Finally, she did and thought, “I can do this. Then I really loved it and decided ‘I want to be an artist.’”

She cites her influencers as Tarfia Faizullah, Patricia Smith and Douglas Kearney.

Neither Asghar nor Woods can specify how a typical day, week or month looks since each is completely different, depending on travel and projects. Asghar is studying for an MFA at the University of Michigan, so the beginning of her week starts with classes there. This year she was a Civitas Fellow with InsideOut Literary Arts Project which places writers in Detroit classrooms. The rest of the time she is with YCA or working on her own projects. When not performing around the country, Woods also dedicates time to YCA, where part of her role is to teach professional development to other teaching artists to help them be better teachers. She also rehearses with her band, spends time with her family and writes.

“In my dream world I would have a regular time for writing or a ritual that centers me,” she says. She tries to dedicate mornings to working out, meditating, listening to new music, reading books, “absorbing and marinating” ideas. 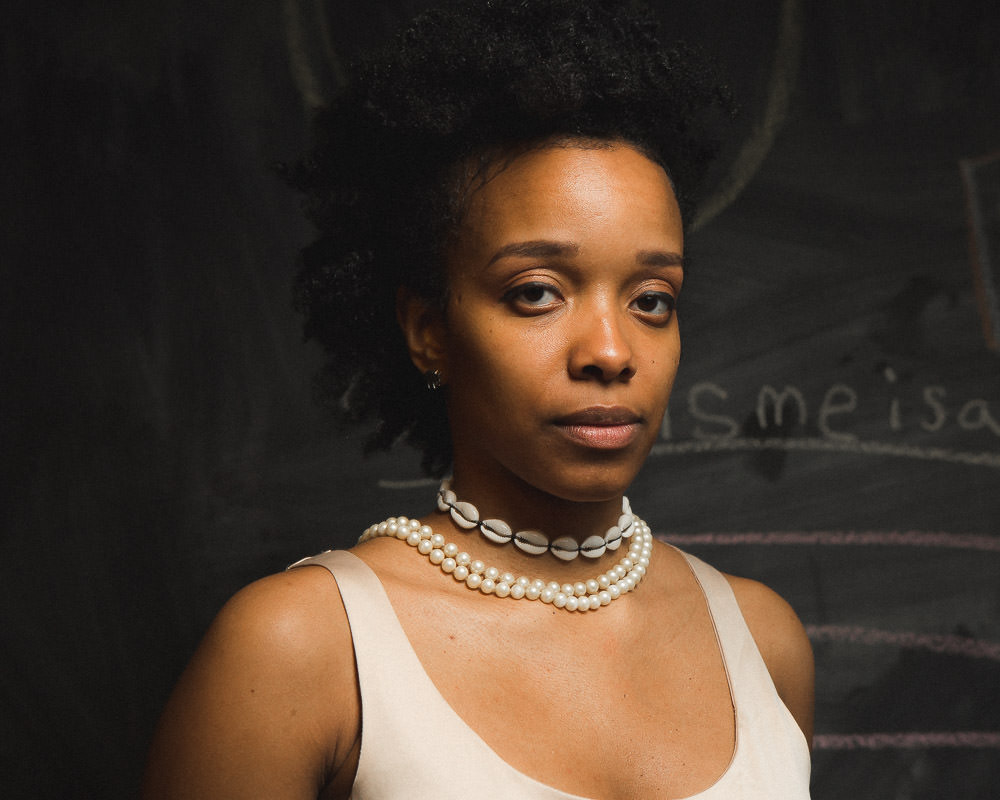 They have both had interdisciplinary practices for some time. Woods has a chapbook “The Truth About Dolls” and has work in anthologies such as “The BreakBeat Poets: New American Poetry in the Age of Hip-Hop.” Asghar created Bosnia and Herzegovina’s first Spoken Word Poetry group, REFLEKS, while on a Fulbright scholarship. She tours the US as a performance poet. This is her first attempt at a screen series.

“I just dove in— I wanted to write a web series because it was less daunting than a screenplay,” says Asghar. It took her a few weeks to write the first episode. There was a lot of play involved and she wanted it to feel light and comedic. “I didn’t expect it to be made, so it was fun.

“Crossing genres is a great way of keeping play at the heart of your art making, which can be weighted with a weird pressure.” It freshened up her language and her outlook.

The main challenge was overcoming her fear of beginning, until she told herself, “I’m just going to do this thing.” She had considered filmmaking daunting, but she had watched Sam Bailey’s web series “You’re So Talented” and figured she could try seven to fifteen pages of an episode.

Asghar shared her writing goal with the teaching artists at YCA, including Woods. They provided feedback on the early script. Then she sent the script out and invited a bunch of people for a reading. “People gave up an afternoon to check it out. They were really supportive. That’s how Sam Bailey came on as director.”

Her friend Woods was enthusiastic. “Brown Girls offers a deeper view than what we usually see on TV,” says Woods. “There are different races, religions, backgrounds. The soundtrack is Chicago-centric,” she explains. One musician is from New York and the rest are local.

“I love making playlists. Your work sets the tone, it decides the transitions.”

For the theme song, produced by Dee Lilly who worked with her on “Heavn,” Woods and fellow vocalist Lisa Mishra wrote their parts separately. “They turned out to be surprisingly similar. Lisa is singing in Hindi, ‘Come Home Friend.’”

While there are obvious differences in writing poetry and music, “the writing comes from the same place,” says Woods. “I’m influenced by Gwendolyn Brooks and the Black Arts Movement poets. I love telling my own story, where I come from and about my family—in both genres. Poetry is more solitary. At first, I’m by myself. Music is more collaborative. I’m with producers and my band, so it forced me to be more extroverted. As a teaching artist, I generate ideas for myself because the group feeds each other.” 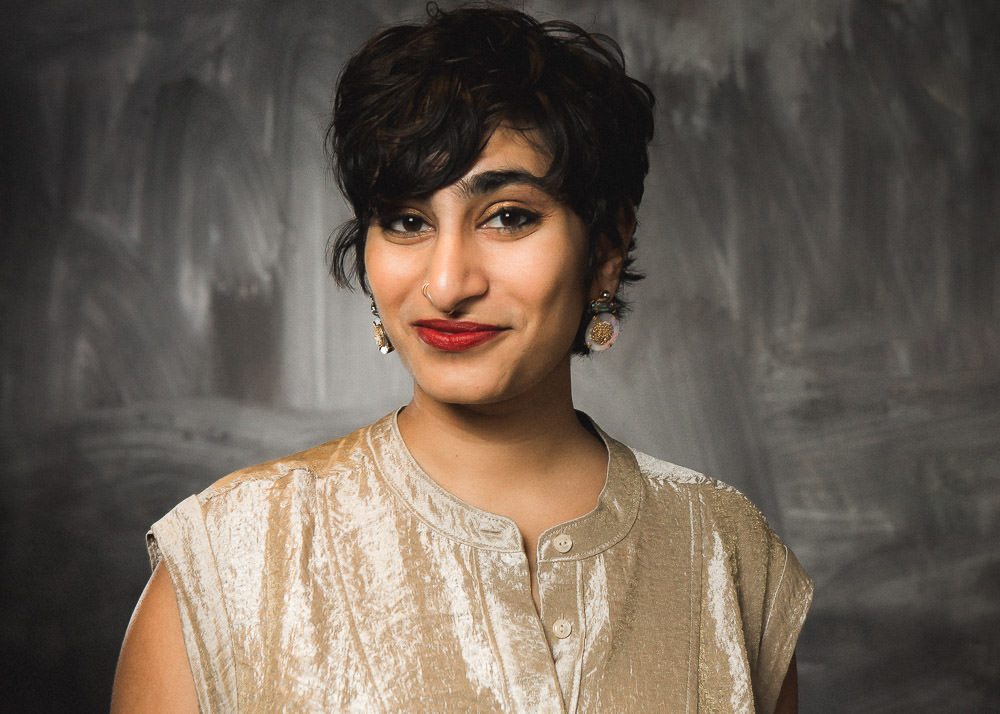 “With poetry, the craft component is at play so it takes longer,” says Asghar. “There is so much weight on each word, whereas with the web script I could be open to messiness. It feels faster. I can be in a noisy place, whereas for poetry I need to be in a place of quiet and reflection.”

Woods is now working on a live show. An anthology she co-edited, “The BreakBeat Poets: Black Girl Magic,” is due out next April. Asghar is working on a second series of “Brown Girls.”

She finds Chicago inspiring. “There is lots to make me think—galleries, visual art, poems. There is a collaborative spirit, artists are helpful. They foster the impulse to try something new and are genuinely excited about ideas.” Her first full-length collection of poems “Today We’re American” is forthcoming from One World/ Random House.