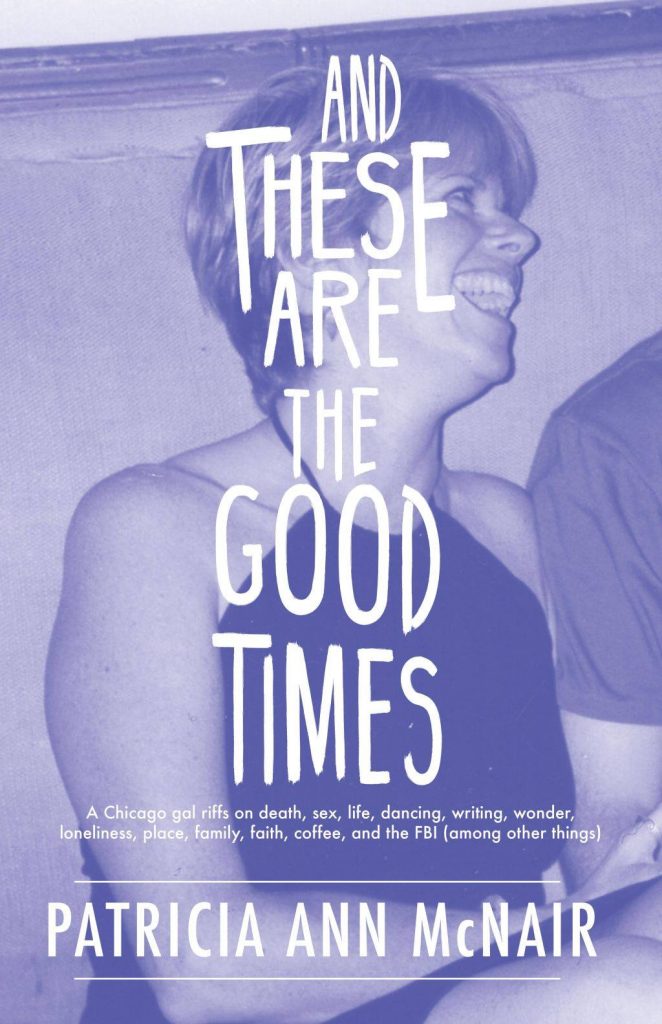 Lots of us have lived in many places and have friends scattered far who we don’t see often, but when we do see them, it’s as if no time has passed. We pick up where we left off. That’s the feeling I got reading Patricia Ann McNair’s latest collection of essays and reminiscences on growing up, losing family members, travel, dancing, writing and sex, entitled “And These Are The Good Times.”

McNair is a Chicagoan who writes a lot about Chicago, but her experiences elsewhere—Vermont, Iowa, Prague, Cuba, Paris—give her a perspective that finds the relatable nuggets in the pan. There isn’t always an epiphany, but she explains her motivation and her constant, openhearted wonder at her place in this world in a steady, colloquial tone. Sometimes she’s drinking coffee with you, sometimes a piece is a finished travel postcard.

One of the most powerful pieces in the book is the eponymous entry about McNair’s dad, who died when she was fifteen. The youngest of six, and the only girl, she’d meet him at the local bar after he got off work when she was a ‘tween (a term that didn’t exist then) and dance in front of the jukebox while he knocked back bourbon and told jokes to anyone within earshot. Her dad came straight out of “Mad Men.”

Now, I’ve read plenty of “those were the days” pieces where the writer takes you on a tedious cab ride through “old” Chicago, pointing out the PNC bank that used to be a Gas For Less, the cell-phone store that used to be a disco, blah, blah, blah, and for what? In these pages, you can see the smoky dinge on the paneling, but McNair’s power is in her simple longing for her father to notice her dancing, her need to bask in the lighthouse beam of his attention that rarely shines on her the way she wants it to.

An associate professor of writing at Columbia College Chicago, McNair spends a big chunk of the book focused on what makes her write, her writer’s architecture. My favorite pieces, however, are the ones where she doesn’t invite you behind the curtain. (Kate Burns)