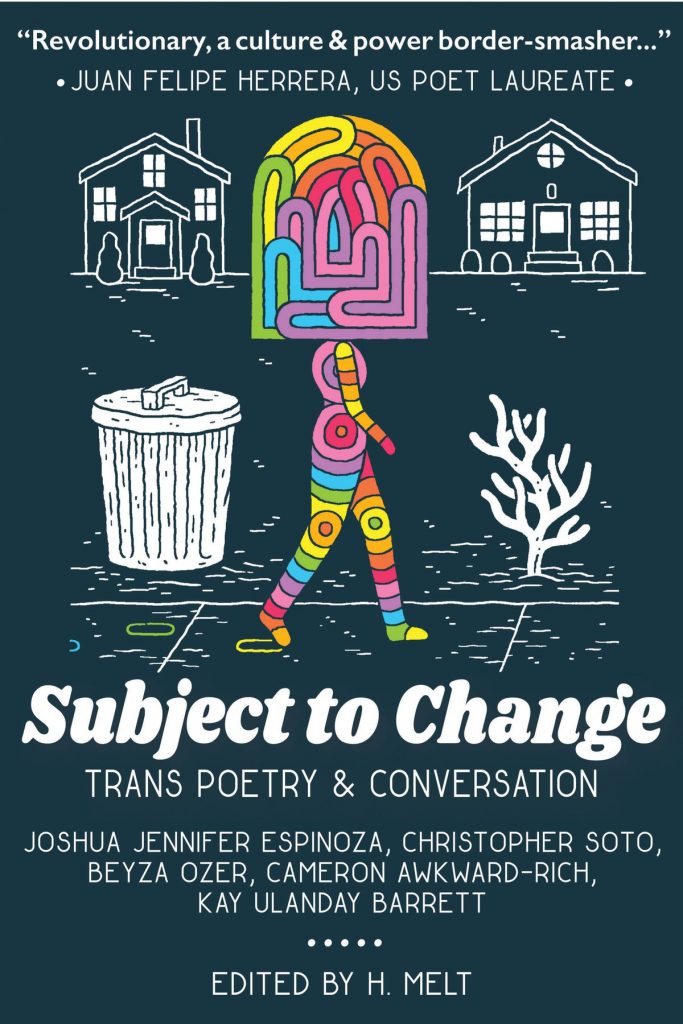 This is a time of dangerous visibility, of stolen lives and authorship. Trans representation is still most often helmed by cis writers and curated by cis editors. “Subject to Change,” edited by Chicago artist and poet H. Melt, is an urgent declaration of rightful ownership by trans writers over their own stories. Joshua Jennifer Espinoza’s lines, “How long can I keep tricking you / into thinking what I’m doing / is poetry / and not me begging you / to let us live?” serve as a melancholy signpost for this anthology, which reads like tended wounds more than words, care in motion more than writing at rest. For example, Christopher Soto’s “All the Dead Boys Look Like Me” written after the Pulse nightclub shooting, carries the powerful rhythm of a grievous dirge, like chewing a bitter herb. A medicine that hurts.

In “Essay on the Theory of Motion,” Cam Awkward-Rich challenges dominant narratives of transness through wry wisdom, quoting an unnamed scholar who expresses a sense of belonging at airports “because there everyone is in transition.”

This metaphor is subverted later, when airports are presented as places where the futility of personal liberation is most evident, where bodies are scrutinized and defined by capitalistic bureaucracy.

beyza ozer writes with omnipresent focus, occupying the finite body of a poet, a Turkish immigrant living in Chicago and a fan of “Gilmore Girls” while space rolls on into forever. Transness lives parallel to, in conflict against and intrinsic within each facet of self—a kaleidoscope in constant flux. We’re offered the touching, wistful sentiment that all bodies—tiny or gargantuan—are celestial bodies, strung together in tensile balance like icicles.

In “Rhythm Is a Dancer,” Kay Ulanday Barrett evokes a particular brand of mischief, trans and queer kids out dancing in “the pants or shirt you were forbidden / to wear at home.” They celebrate what dazzling possibility can cut through the chokehold of this world to our bodies.

This anthology is one to read and re-read, to tend and digest lovingly. In Ulanday Barrett’s words, this text exists “to celebrate, / to honor, / to love, / to embrace, / all our movements.” (Sung Yim)