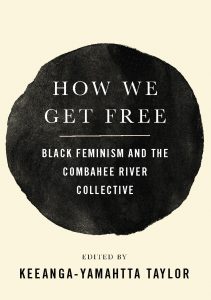 “How We Get Free” is a compilation of interviews with notable black feminists throughout the country, including three authors of the 1977 Combahee River Collective statement, Alicia Garza, cofounder of #BlackLivesMatter, CRC member and Chicagoan Demita Frazier. While Taylor’s voice is most prominent in the book’s introduction, she has put together a new-age guidebook for the millennial black feminist and those looking to understand the true meaning of intersectionality. Her previous book, “From #BlackLivesMatter to Black Liberation,” also published by Chicago-based Haymarket Books, won the 2016 Lannan Cultural Freedom Award.

“In the last several years, Black feminism has reemerged as the analytical framework to the activist response to the oppression of trans women of color, the fight for reproductive rights, and, of course, the movement against police abuse and violence,” says Taylor. “The most visible organizations and activists connected to the Black Lives Matter movement speak openly about how Black feminism shapes their politics and strategies today.” She says the interviews “attempt to show how these politics remain historically vibrant and relevant to the struggles of today.” The reason is not nostalgia, but because “Black women are still not free.”

The book includes the original 1977 Combahee River Collective statement and interviews with intergenerational black feminists. With these primary sources, readers receive a thorough history of black feminism’s mission, intersectionality and the ways it has evolved as the foundation to twenty-first-century activism and the struggle for liberation. In each interview, Taylor asks, “When did you begin to start identifying as feminist?” and each woman tells her story of black feminism and activism and their necessity today. (Negesti Kaudo)