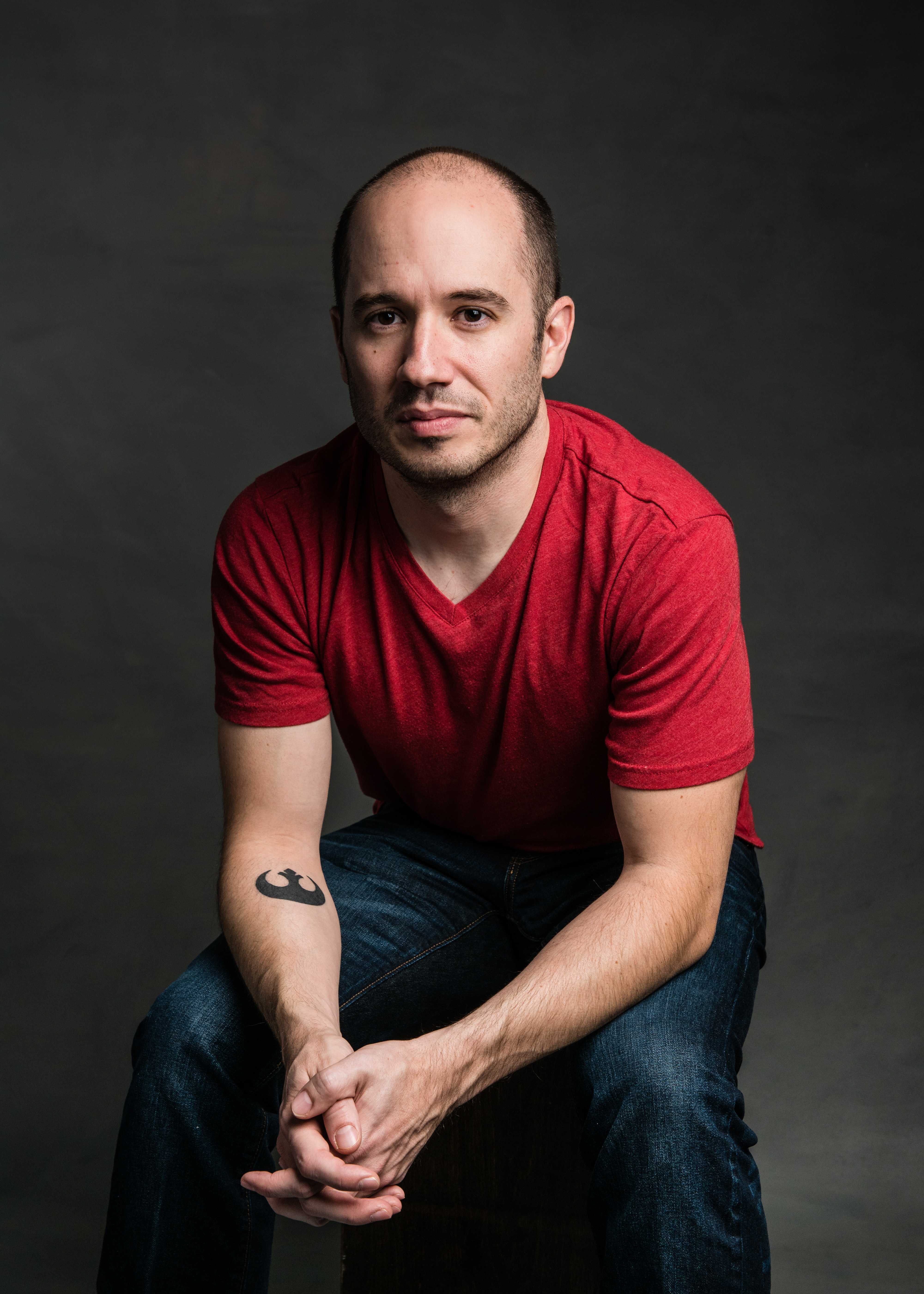 Comics writer Michael Moreci has written for DC, Image and other major publishers,, as well as Lucasfilm and Tor.com. His own series, “Roche Limit,” was called one of the “50 best sci-fi comics of all time” by Paste Magazine. We discuss his first novel, “Black Star Renegades,” in which Cade Sura and his band take a speedy space romp in an attempt to save the world from an evil kingdom.

It’s been a lifelong dream of yours to write a novel. Why?
I’m a lifelong reader and I’d like to think I’m a storyteller as well. Being able to tell a story in prose form—which I’ve done a number of times before, though not with such an expectation of said story being released—satisfies the dream I’ve had since I was in grade school to write a book of my own. I’m lucky, beyond lucky, to be able to do so.

What are the differences, similarities and challenges of writing in different modes, such as comics and novels? In comics, I see that you have to compress a lot of exposition into brief moments, but that would be clunky on the page of a novel. How do you shift gears?
Writing the novel was tough at first, without question. Luckily, I have a background in prose—I’ve been writing stories and books my entire life—I even have a creative writing M.A from Northwestern University, believe it or not. Which is simply to say that I had some of those tools in my tool belt. Still, I had a lot to refresh and even more to learn. A lot of my inspiration and instruction came from where it always comes from—books. I’m a voracious reader, and I’ve always found most, if not all, of what I’ve needed to know through reading. That said, at the onset of writing “Black Star Renegades,” I read. A lot. And through those many books I found my way to learning how to write a novel.

What’s the most fun?
I love comics, I always will. But nothing will surpass the sheer, unbridled joy of writing a novel. Comics, particularly mainstream comics, tend to have a lot of people stepping on your work before it sees the light of day. Sometimes collaborations can be great, sometimes they’re not. But with a novel, it’s just you and your words. At the onset of this project, my editor said, “Okay, get to writing—talk to you in a year!” Which was terrifying at first. But I came to enjoy, greatly, the isolation. I love not working in stops and starts like comics, in small batches at a time. I sat down, nearly every day, and I wrote a story from beginning to end, and it was exhilarating.

Tell me about your audience? What type of people read your previous work and do you imagine you will have the same audience for the novel?
I think the audience is pretty broad. We’re living in a great time for sci-fi/fantasy, and more and more people are watching those kinds of shows, reading those books, or picking up those comics. The interest in genre, in my estimation, has never been greater. And “Black Star Renegades” fits comfortably in that wheelhouse because, being honest, it’s meant to be mainstream—it’s meant to be accessible. I read a ton of sci-fi, and a fair amount of it, I hate to say, soars right over my head. They’re just difficult to crack, for any number of reasons (which isn’t a criticism, just an observation). “Black Star Renegades” isn’t that kind of book. It’s fun, it moves fast, and the characters—I think, hope—are easily relatable. That makes it a fit for my current comic readers, but also for a wider audience as well—sci-fi-fantasy readers and TV/movie viewers alike. Plus, it’s fun. I stress that. And I think we can all use a little bit of escapism these days.

What can you say about the themes of this novel?
There are a couple micro themes coursing through the book, like any story. But, to me, the most salient theme is of community, of unity. The foundation of the book is set upon the idea of tearing down the messiah myth, and I don’t mean that in a religious sense. I mean Luke Skywalker. Katniss Everdeen. Harry Potter. This idea that an all-powerful someone is going to come along and save our asses from the fire. And we see that mentality play out in our world. For some, like myself, it was Obama. For others, it’s now Trump. Regardless of the figure, that kind of thinking is dangerous. We’re in control of our destiny, and we’re too quick to relinquish that power. What that power requires, though, is not only having faith in ourselves but faith in the people around us as well. In the book, Cade can’t topple the Praxis kingdom alone. He needs others, he needs the galactic community to unite for a common cause. Like the saying goes, “it takes a village,” and I think that’s a powerful message for our troubled times. We’re better—all of us—when we’re united and together. I’m not saying it’s easy, but the less we put all our faith into one lone figure, which can do nothing but divide, and the more we work together toward common goals, the better we’ll be. 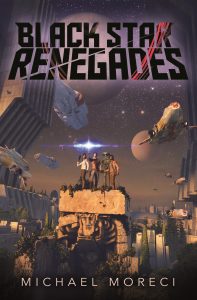 Why write an homage to “Star Wars?
The money, mainly. Kidding, kidding! “There’s a lot of reasons. Primarily, it’s because it’s what I love. There are few things that’ve been more informative in my life, and more meaningful, than “Star Wars.” It’s been with me my entire life, and it has taught me how to tell stories, it has informed my own spiritual sensibilities, and it’s been there for me in the times when, as a poor, lonely nerd, I didn’t have a whole lot else.

It’s more than that, though. I felt like I had a worthwhile story to tell that just so happens to occupy the same space—no pun intended—as “Star Wars.” It’s no different than Brandon Sanderson writing in the vein of Robert Jordan or, say, the countless authors who write like Stephen King. If you grew up in a certain time, these writers and stories tended to cast an enormous shadow over your life, and you can’t help but be influenced by them.

Peaks and troughs go with the territory of any creative pursuit. What can you tell me about the benefit of persistence? You obviously have a strong capacity for work—what does your writing day, week or year look like?
It’s pretty crazy. I stay at home with my two kids, who are six and three, so I have a busy household. Great—I love it—but busy. I have help, thankfully, with a sitter, family and friends, and I use the time I have to the best of my capabilities. Luckily, I’m a fast worker, I always have been; I wrote for years around a day job, so I learned the value of efficiency. Plus, I love writing. I don’t know what I’d do if I wasn’t doing this job; I really don’t. So putting in a lot of hours—a lot—doesn’t bother me at all. And with that, I’m able to get a lot done; in the past two years, I’ve written three novels and, like, twenty comic scripts—plus a few pitches for upcoming stuff. Suffice it to say, I stay busy. Ultimately, I’m perfectly content working, spending time with my family, and reading. That’s about all I need. And sleep every once in a while.

If it were to be made into a movie, and money was no option, who would you want to play Cade? Ga Halle? Kira?
Well, first, this movie could not be made without Tessa Thompson playing Kira. There’s just no way around that. He might be a little too old, but I’d love to see Dan Stevens play Cade. Katheryn Winnick, from “Vikings,” would be a terrific Ga Halle. And Donald Glover as Mig. No one would be better.

What music do you listen to while writing?
Mainly movie scores. I’m a stay-at-home dad, though I have a sitter that watches my boys a few hours a week so I can work during the day. That said, with them still home, the house has a tendency to be a bit chaotic. They’re three and six, so madness is normalcy. So, I have to have something to listen to, but lyrics are distracting. I go with scores—“Star Wars,” of course, but I have a long playlist of soundtracks that I love.

What’s next?
2018 is busy for me, which is good. I love to work; I love to keep the engine running. In addition to “Black Star Renegades,” I’m launching a new comic series called “Wasted Space” in April with Vault Comics. It’s a sci-fi book that’s a mixture of Philip K. Dick and the comic series “Preacher.” In June my second novel, “The Throwaway,” releases. It’s an espionage story concerning an American man who’s shipped to Russia after being framed as a spy. To prove his innocence, he must fight his way back to the United States. Then, there’s “Black Star Renegades 2,” but that’s sometime in early 2019.