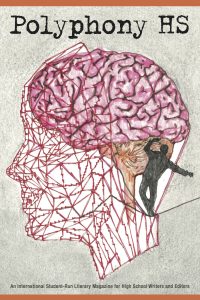 The ability to put words to our own lives forms a foundation to happiness, says Billy Lombardo, the managing editor of Polyphony H.S., a locally based international high-school literary magazine. “I know what it did for me in my own life as a writer,” he says. “I want Polyphony to always be in on this process with young people from around the world.” The magazine recently published its thirteenth issue, with student work from Australia, the United States, Zimbabwe and fifty-one other countries.

The masthead of Polyphony reads like a who’s who of lit—advisory board names include Stuart Dybek, Jennifer Egan, Scott Turow, Donna Seaman, Elizabeth Taylor, Chang-rae Lee and Alex Kotlowitz. Conceived in 2003, this repository for fiction, literary nonfiction and poetry has produced award-winning alumni, many of whom have gone on to publish and participate in university writing programs. Among them are Rachel Stone, Peter LaBerge, Talin Tahajian, Clara Fannjiang and Natalie Richardson, who was the teen poet laureate of the Midwest.

The founders thought that developing individual voice depends upon close, careful and compassionate attention. “We believed that by attending so closely to the work of our submitting authors, that we were validating and legitimizing the occasions of the young as well as their attempts to language those occasions through poetry, fiction and essays,” Lombardo says. “By commenting thoughtfully on their work, we were also helping them to voice their lives more precisely and artfully.” He knows of no other student publication with this focus.

“We soon learned of the impact we began to have on our submitting writers,” Lombardo says. “Thank-you letters started coming in from the authors we were rejecting at a ninety-six percent rate.” Their work had never been looked at and commented on as thoughtfully and thoroughly as the magazine’s editors had done.

The publication, soon to be known as “Polyphony Lit,” is so successful that Lombardo hears almost daily from students around the world who want to join the editorial staff. “They are learning from our editors, and our editors are learning from each other,” he says. There are 175 student editors, with 120 active editors. Each year, the magazine hosts three face-to-face workshops in Evanston and three-to-five weeklong online workshops. It also partners with the Claudia Ann Seaman Awards for Young Writers, open to writers in grades nine to twelve.

“More than anything, I hope that we’ll get into the hands and heads and hearts of every young writer in the world,” Lombardo says. “I hope that we’ll become a model for other magazines that will look at every poem, story and essay written by a kid as an opportunity to connect young people with each other in ways that couldn’t happen otherwise.”