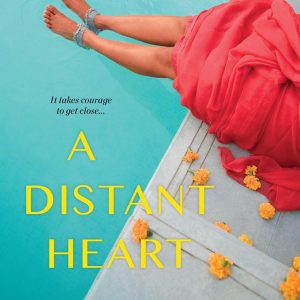 Star-crossed lovers never go out of style, whether in Mumbai, Hong Kong or Chicago, where Sonali Dev’s latest book travels. Kimi and Rahul are kept apart by social class, parental disapproval, unresolved grief, work pressure and the dysfunctional organ that gives Sonali Dev’s novel its name—“A Distant Heart.” As well as romance in the wings, there’s a thrilling race to track down gangster Asif Khan, who has his paws in an organ-transplant crime ring. He murdered clinic doctor Jen Joshi and now he’s threatening Kimi’s life.

It’s hard not to become invested in the character of Rahul, who witnessed his police-officer father die protecting politician and former Bollywood leading man Kirit Patel. Dev writes with stunning tenderness for the bloodied boy, as he trudges up the betel-stained stairs of his family’s compound to see his newly widowed mother. Under politician Kirit’s mentorship, Rahul goes to school, becomes a cop like his father and sustains a long friendship, sort-of romance, with Kimi, Kirit’s daughter.Initially appearing as a rich, pouty, bubble-head, her back story of illness and isolation reveals her to be a compassionate woman and good foil for the moody Rahul. There is an enormous social gulf between the pair. She’s a dilettante magazine writer who lives in a marble-floored mansion, while he’s a hard-scrabble worker who grew up using a communal toilet. Dev’s detailed descriptions of Mumbai accentuate the differences between the pair’s worlds, probably insurmountable in real life, but scalable in fiction.

At its core, “A Distant Heart” is a simmering romance with a good dose of thriller. The opening exposition is clunky, but the story soon takes off, using dual timelines for Kimi and Rahul. The plot concerns itself with illegal organ donation, but the true concerns of the book are with the emotional workings of the human heart—how do we get close to another human when traumatic loss instigates self-protection, when does guilt get in the way of family loyalties, and what boundaries will parents cross to secure their child’s life?