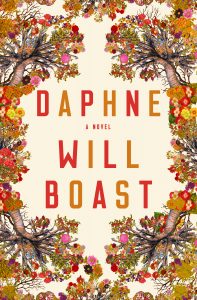 Cynical, orderly and tightly wound, Midwesterner Daphne lives in an almost magazine-worthy apartment in San Francisco. She appears to have life under control, runs a research lab, is on the brink of thirty and single. “Daphne” is a startling debut novel from Will Boast, author of memoir “Epilogue” and the story collection “Power Ballads.”

Initially the book seemed a little too controlled for my taste and I was tempted to put it aside—until I couldn’t put it down. The central character has cataplexy, a neurological disorder that causes her to buckle under the weight of emotions. Embarrassment, apprehension or melancholy provoke fluttering eyelids and weakness, while major feelings such as rage, horror or laughter bring her to her knees. The most powerful emotions paralyze her. Just like her namesake who is transformed into a laurel tree in Greek myth, Daphne is petrified.

Boast keeps the prose taut and slick early on, loosening it as his character unravels. Daphne dismisses her inability to relax—“us Midwesterners have a hard time adjusting to paradise.” She keeps dangerous emotions at bay by visualizing “smoke, cattails, sun-bleached picnic tables, diamonds of light, light making diamonds on the river,” images that recur as a mantra through the book. But safety is illusory. She is trapped because, “when you insulate yourself against disaster, you’re always waiting for it to arrive.”

Daphne’s Apollo arrives in the form of Ollie—a casual soul who wears his heart on his sleeve. As their relationship loosens Daphne and her “puppet strings,” her carefully constructed life frays. Her disordered episodes, written with dizzy, breath-defying detail, explain part, not all, of why Daphne has worked so hard to maintain order and keep herself from love. The risk is that “when you insulate yourself against disaster, you’re always waiting for it to arrive.” Boast skillfully uses myth and disorder as metaphors to explore trauma and contemporary loneliness. The moral: cynicism and distance are no substitute for the mess and pain of true intimacy.