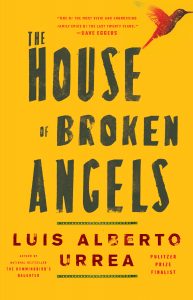 Readers with messy families will feel at home with Luis Alberto Urrea’s epic “The House of Broken Angels.” Sparked by real events and characters in the author’s life, the novel unfolds as the De La Cruz family congregates in San Diego for Big Angel’s final birthday and his mother’s funeral. Urrea creates a complicated protagonist and a rowdy cast—hilarious, lusty, spiteful, loving and lethal. Perla, Big Angel’s wife, thinks families come apart and regroup like water—“In this desert, families were the water”—and we see how the family changes across borders, in estrangement and reconciliation, privately and in public.

Big Angel remains “fierce as a falcon,” despite being physically reduced by cancer. While his body is “carved down to the size of a child,” his memory has expanded. He reveals that he has been atoning for an early misdeed. Urrea deftly captures his glimmers of wisdom. When the matriarch dies, Big Angel and his siblings understand that they are the older generation, the next in line to die. The son realizes how little he thanked his mother. Meanwhile the older generation thinks the young ones are stupid—“they think they are the first to discover the world.” This is a story about a man reconciling that death is a ridiculous joke—“all the striving, lusting, dreaming, suffering, working, hoping, yearning, mourning, suddenly revealed itself to be an accelerating countdown to nightfall.”

Warmly entertaining, “The House of Broken Angels” observes immigration, violence, rejection, poverty and aging. One of Urrea’s many strengths is how he swoops from side-splitting dialogue to meditation. Much is elided, but looks between characters tell plenty. Urrea writes tenderly about longing. Big Angel and Perla still heat each other, despite his old body’s inability to match imagination to action. Lines that could be corny—“Love is the answer. Nothing stops it. Not borders. Not death”—are profound because the speaker acknowledges words’ inadequacy in capturing great truths. Except Urrea’s words do that.