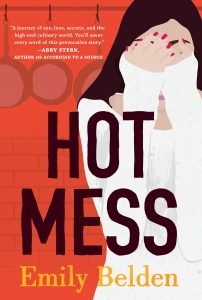 Wanna get away from this gray winter? Chicago food blogger Emily Belden’s debut novel “Hot Mess” is a camera-ready beach read for the couch. Allie, a twenty-something Lincoln Park Pollyanna, dates snowy-nostrilled, hot-shit chef Benji, whose life on the edge is chronicled by the minute on social media. The sex, notoriety and intensity of their relationship give her the biggest thrill of her life—it’s a career-girl-drug-addict-Twitter trifecta—so she’s okay with being his gatekeeper while he gets clean and does the occasional pop-up dinner to keep him Twitter-hot.

When a barely sober Benji gets a dream offer to run his own kitchen on Randolph Street, Allie fears he’s not ready, but she fronts him her life savings to bet on their future together. Guess who relapses and vanishes? Guess who’s now broke and contractually bound to open the next hot spot in a month, despite having zero restaurant experience and no star chef? Suspend your disbelief and imagine a twenty-something Reese Witherspoon rolling up her sleeves and learning the restaurant biz on the fly.

Do it again when Allie tries to coax her friends to “brunch” in Garfield Park so she can comb the alleys for her coked-out lover, even though the best place to get coke is a high-end restaurant. Silly Allie, Garfield Park is for heroin. Bite your tongue when she refers to her co-owner-GM, the head chef, and herself as “the girls.” Yes, this was written before the #MeToo movement, but it’s not news: women who helm some of Chicago’s real hottest restaurants would not suffer that label.