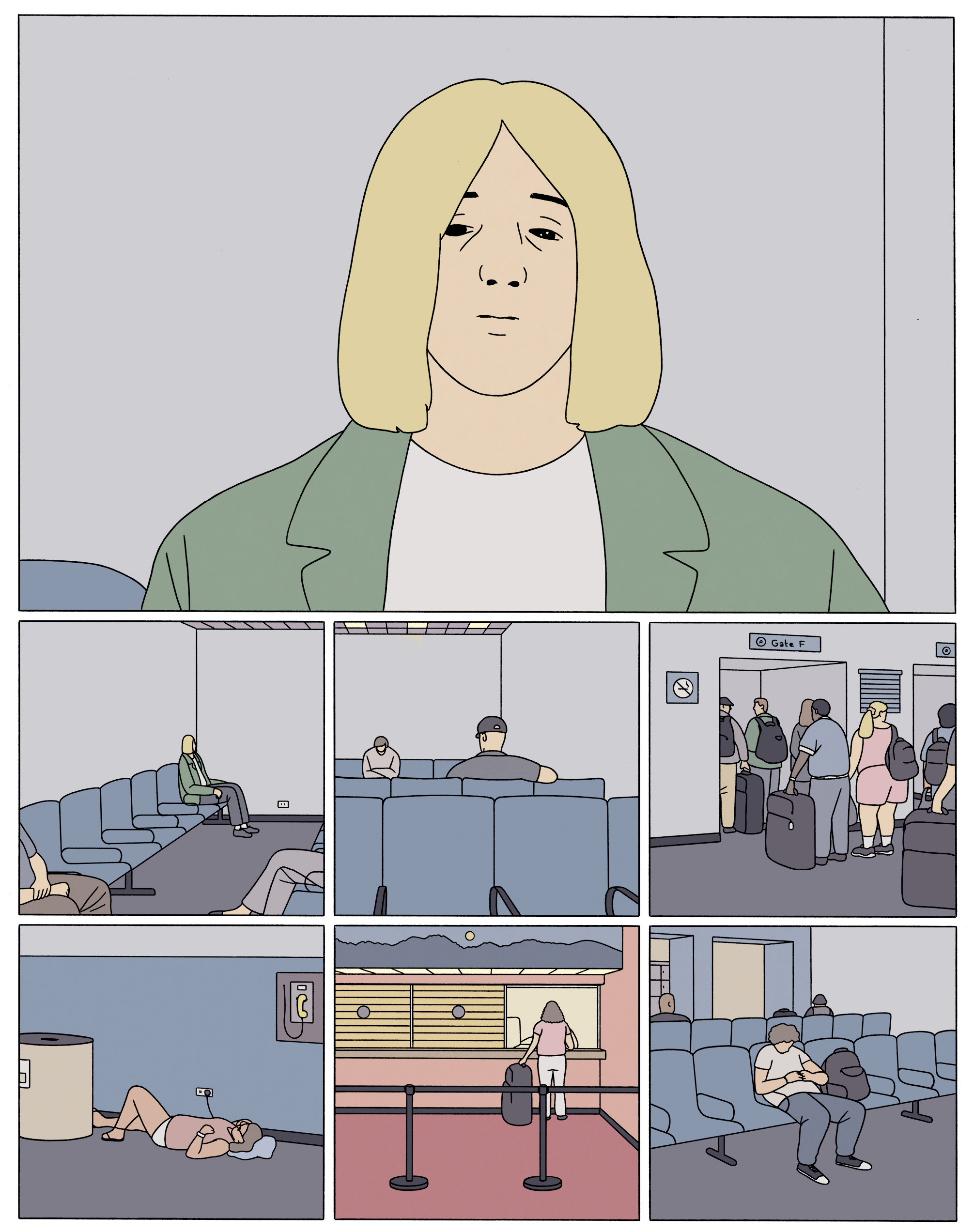 What a mixed-up, crazy world we live in. Humans are a peculiar species. We contain multitudes, as Walt Whitman wrote and Nick Drnaso illustrates in his beautiful graphic novel “Sabrina.” A story of grief and loss, it follows what happens after a young woman disappears and how her loved ones cope in our news-frenzied, social media-obsessed culture. Sabrina’s shocked boyfriend Teddy holes up with his old friend Calvin, a taciturn military worker who does his woeful best to be a rock for his buddy. Calvin is dealing with his own rubble—a failed marriage, job issues and loneliness. Sabrina’s sister Sandra tries to cope through bodywork and meditation, but Teddy’s inclination is to withdraw into his bedroom. His less-than-positive lifeline is a radio host who hawks conspiracy theories. Meanwhile, the internet holds every type of ugliness, including vile stories about Sabrina’s murder.

“Sabrina” is a devastating story. Is it based on any particular incident?

It’s not based on anything personally true, except that I was having recurring nightmares about abduction, specifically my girlfriend (soon to be wife) being abducted. At some point in my daydreaming I imagined a scenario in which I moved in with my friend, who was living alone in Colorado and working in the Air Force at the time.

Emotionally, it is taut and quite bleak. I found it very affecting to walk with these characters as they try to navigate the aftermath of Sabrina’s disappearance. Did you struggle with the emotional content at all? What were the challenges?

Yeah, I remember even being aware of the dangers of working on this type of story before I had even started, wondering if it was a healthy thing to do and there were times where it certainly was not. In retrospect, I was pretty naïve to think I could work on something like that so intensely for a few years and not pay some sort of psychic price. Even now, I’m still not sure how I feel about it. When I finished the first draft last year, I was so ashamed of the story that I cancelled the publication. It’s not a dramatic overstatement to say at the time I thought I might not be able to draw another comic ever again. 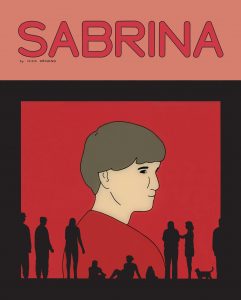 The characters are ordinary, their lives are mundane, they are restrained in their actions and quiet in their ways of moving through their trauma. It’s starkly different to how Americans are often portrayed in television or film, especially in the aftermath of murders on cop shows. I’ve seen your restraint attributed to a Midwestern sensibility. Is that how you see it?

For some reason, I found that there wasn’t much room for explosive emotions in this book. In a lot of the sequences where a character is crying or yelling, more often than not I had to go back and rework the drawings, either by obscuring their face, or moving further away to show them curled up in an empty room, as an example. That seemed more effective than a dramatic close-up, though I’m not very stringent about those “rules” cartoonists tend to commit to. If anything, it would be nice to challenge my own assumptions in my next project.

You present the worst of humanity—murder, conspiracy theories, isolation, meanness—interspersed with understated glimmers of goodness, such as the stranger who buys a little girl her favorite doll. Do you have an overall positive view of humanity or does it seem awful?

Oh, my outlook is pretty positive, although I’m never sure how much I should pay attention to sadistic human behavior, which is something I’ve always been interested in, maybe to my own detriment. It’s an unfortunate fact of life, but of course we all have to hope that it’s an exception and not the main fact of life. I guess this book is partly about when that worldview is taken to an unhealthy extreme, a view that everyone is evil, there are conspiracies everywhere and that people are essentially not to be trusted. I certainly hope that isn’t the case. 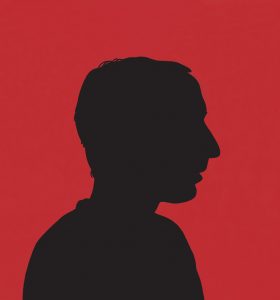 You show the genders relating very differently after bereavement. Sandra’s friend comforts her by hugging her and taking her on a guided meditation. Calvin lets Teddy stay with him, and drops food at his door, but stays at a physical distance. Calvin and his work buddy have a competitive friendship that provokes anxiety. Calvin is unable to communicate adequately with his ex-wife. What do you make of gender roles?

Well, Calvin and Teddy do share a certain kind of awkward intimacy, but it’s more that they’re not able to articulate their feelings to other people and each other, which is maybe why they’re friends, in a default-setting way. Sandra seems to face her grief head-on and maybe she will end up better off for it than Teddy, but she also seems to absorb pain because of that openness. Maybe it’s that Teddy’s feelings are never made very clear, and we’re not sure how intense or genuine his sadness actually is.

I appreciate how you layer news media, internet, talkback radio and mental health surveys with the action (if action is the right word for what the characters are doing)—can you explain how they help tell the story?

I guess I wanted these aggressive, dissonant, anonymous voices to wash over the characters, which might explain why it made sense, at least to me, to make Teddy and Calvin somewhat subdued and unemotional. It’s the reason I used a radio host instead of a talk show host, a disembodied entity that fills the room more than an actual person sharing ideas.

Your flat style with minimal lines is very distinctive. How did you develop that? What are the influences on your work? Tell me something about your journey to this point. Any words of wisdom from your teachers that you hold close?

I don’t think it’s very original. At least, it feels like I’m working in a certain tradition along the same lines as a lot of other cartoonists. It might change if I become more comfortable and loose in my drawing, but I realized a long time ago I would probably never be able to draw with too much fluid emotion.

Ivan Brunetti has had more influence on my creative life than probably anyone else, but it never feels like he’s guiding me toward anything or being an authority. We’ve transitioned over the years from a teacher-student relationship to a close friendship, which I still cherish. It’s just luck of geography for me that Ivan, Chris Ware and so many other great cartoonists live in Chicago.

Can you explain how you come to the storytelling—do images come first or words?

Usually [I start with] some kind of idea before anything, which would be written down in a few words as a reminder. I don’t start writing until I’m pretty confident I’ve arrived at something usable, to avoid staring at a blank document and getting discouraged. By the time I sit down to draw, I have a script that’s pretty tight. Working on “Sabrina,” I might script a few pages, then spend a week drawing while thinking of what will follow, then spend more time scripting the next section, then back to drawing, and so on. 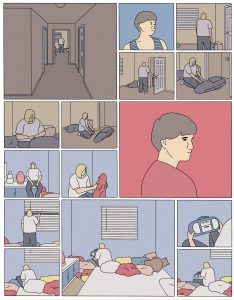 You’ve moved from a pastel color palette in “Beverly” to a much more subdued range of browns, greens and gray. How do you use color as part of your storytelling?

The transition must have been pretty natural, because I didn’t think there was much of a departure from “Beverly” at the time. Actually, the last story in “Beverly” is a little darker and duller than the rest of the book, so “Sabrina” was maybe a shift further in that direction. I’ve been making paintings on glass since I finished “Sabrina,” in part because I felt like I was becoming way too restrictive in my color choices. Whatever the next comic is, I think I’ll have to develop a new approach.

How long did it take to complete this work?

I visited Colorado Springs to take reference photos in December of 2014, and started drawing probably in January of 2015, so about three years.

What do you hope readers will take away?

Part of the reason I thought the book was a total failure when I finished was that I truly thought there was nothing positive to be taken from this story and that it was a miscalculation on my part to even start it. I’m pretty scared to see what the reaction will be, but I guess slightly curious as well. I can rationalize and say there must have been some reason I felt the need to make it at the time, but I won’t know until I have some hindsight.