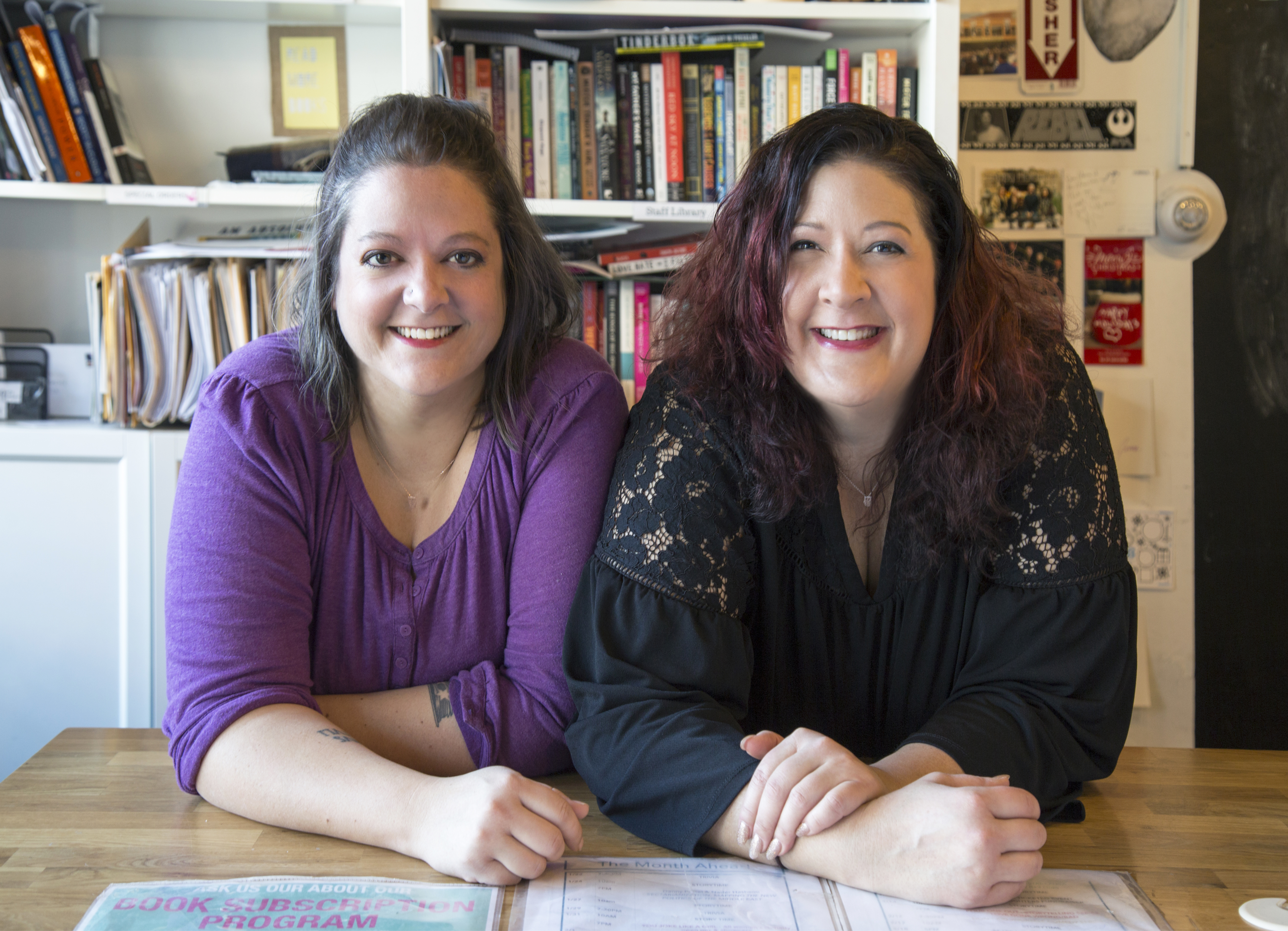 An anthology of erotica by Chicago authors is a novel fundraiser—one that indicates just how far local writers will go to support an independent community bookstore. Rebecca Makkai, Renee Rosen, Kathleen Rooney, Megan Stielstra are among the authors who helped Volumes Bookcafe when it hosted an Indiegogo campaign to secure its spot in the independent pantheon. Despite the retail apocalypse, online shopping and big-box store culture, independent bookstores are on the rise. E-books have declined and book sales are up. Contrary to what doom merchants would have us think, most Americans read books. Millennials are reading more than older peers and are more likely to buy books rather than borrow from a library, according to Pew Research. Local independent Women & Children First Bookstore reports a twenty-five percent increase in sales on this year’s Independent Bookstore Day over last year’s.

Between 2009 and 2015, more than 570 indie bookstores opened across the country, translating to a thirty-five percent increase after a decade of decline. Chicago’s vibrant independent bookstore scene (click here for listing) is representative of the rise, adding many new indie bookstores to its ranks this last decade, including Bucket O’Blood Books & Records, City Lit, Curbside Books & Records, Uncharted Books and The Dial Bookshop. Also new to the mix are sisters Kimberly and Rebecca George—educators and lifelong bibliophiles—who opened the doors to Volumes Bookcafe in Wicker Park two years ago. As with many indie bookstores, the Georges don’t just sell books, they build community, of which online and big-box store culture always fall short. 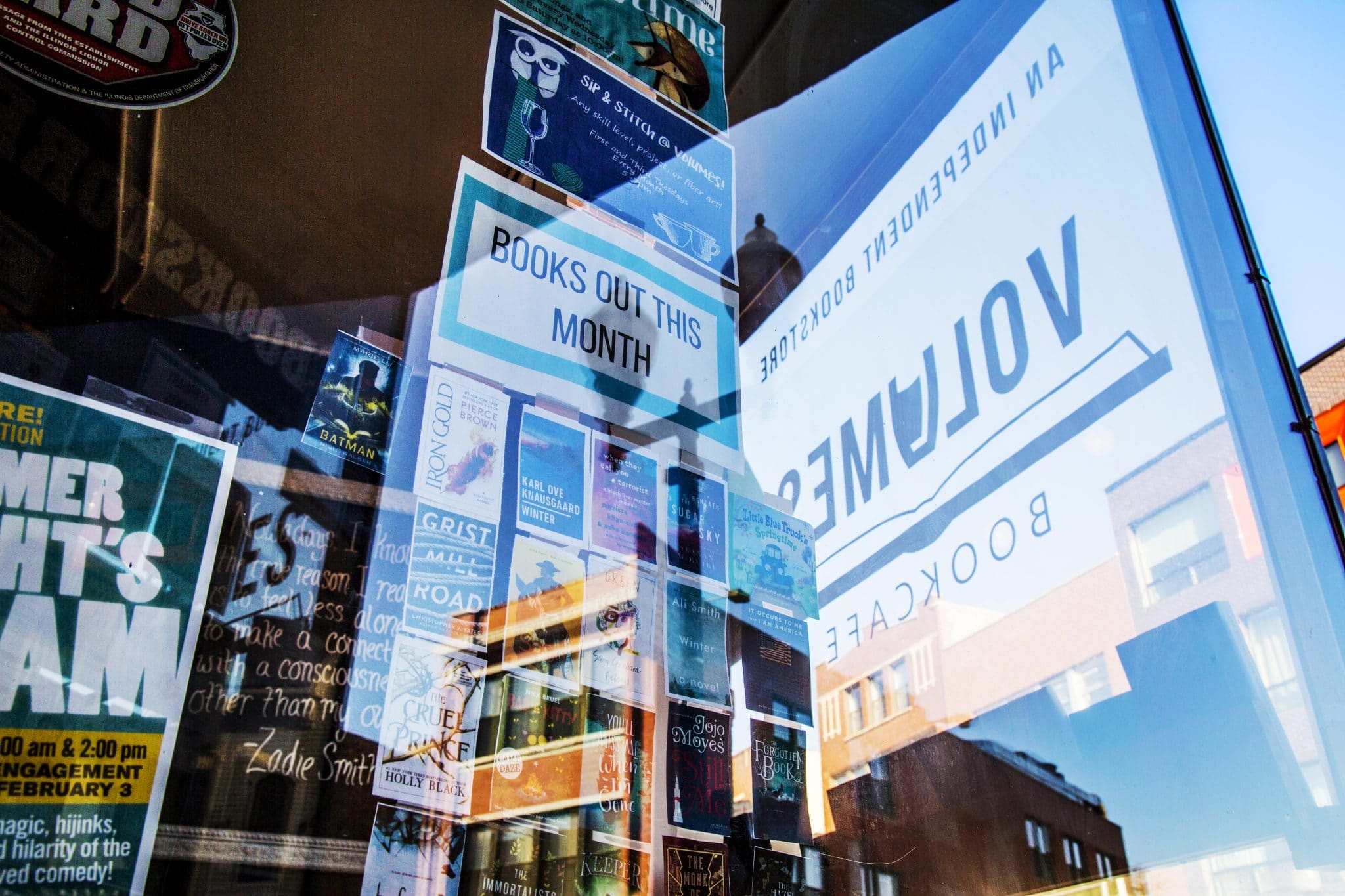 Since opening, the pair has hosted many events in their space, creating opportunities for strangers to come together and talk about “life and politics, love and everything else in-between.” Equal to the energy the Sisters George invest in residents and readers is the support they provide Chicago authors and the literary community beyond city limits. When Kimberly and Rebecca needed help this past spring to renew their lease and help pay down debts, there was an immense outpouring of support from authors, residents, people from out of state, out of the country (as far as Israel and the U.K.) and  other bookstores like Women & Children First and 57th Street Books. The Sisters George didn’t quite reach their goal of $60,000, but they brought in about $40,000 from over 600 contributors, a testament to the indie bookstore’s relevance and the community’s hope for the store to flourish. (The Book Table in Oak Park also had a recent campaign to expand their fifteen-year-old community store.) I recently discussed the store with Kimberly and Rebecca George.

Where did you get the idea to do an Indiegogo?

Other bookstores have done it successfully in the past. The Lit Bar in New York did a campaign to bring a bookstore to the Bronx.

What have been some of the most surprising or touching ways people have responded to Volumes’ call for help?

After the article in the Tribune this winter, we had people writing checks from all over the United States. We’d get ten dollars in the mail with a beautiful little note about how much they love bookstores. One of my favorite people came in and said, “I hate Indiegogo” and gave us cash. They said, “we want you to be here” and we started crying. What’s been great about it is how people are constantly glad to be a part of it—this is important and they’re happy to help us stay.

Did the campaign help?

We’re not out of the woods, but it’s definitely been a huge relief. We still have to get through the next year. But, it certainly helped in renegotiating our lease. 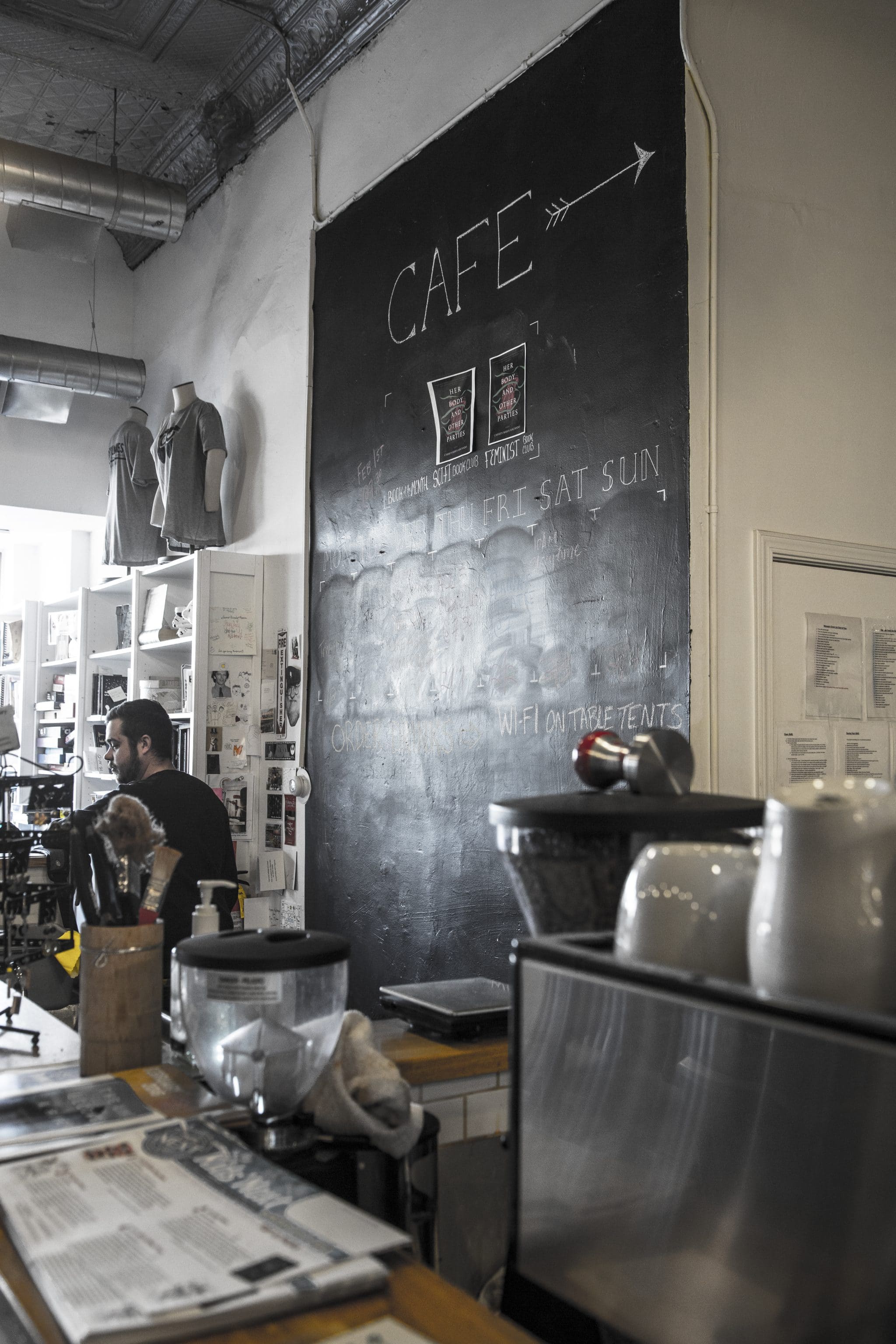 The 1980s brought mall culture and big-box store culture and that was enticing. Later, online shopping. People didn’t realize what they were going to lose with those things. Understandable. We all fell for it. But people miss community. And bookstores are starting points for creating community space. That’s what we do.

When looking back on the last couple of years, what were some highlights?

Opening at all was a big highlight. But we’ve had events with two Pulitzer Prize winners, hosted National Book Award winners, Super Bowl champs, NBA champs, sci-fi writing gods and we recently had Stuart freaking Dybek here! The night we hosted the Obama farewell speech was a highlight, too. No one needed to see that outside of their home, but we packed the place from wall to wall. People sat on the little kid stools and on each other’s laps. We all laughed and cried together with strangers.

What are you most concerned about at this point?

That people stop buying books. Constantly worrying about finances. Just this morning, we were on the phone with the bank. But that’s part of business ownership and we don’t know when that goes away or if that ever does. We’re always going to worry if we can make it. It’s a great business and we love what we do every day even though we do it seven days a week and ten hours a day and we never get two days off in a row and that’s crazy, but we love it and think it’s necessary.

What shifts have you experienced?

Our bookstore already sold a good deal of books related to social justice. After the election, there were several months where we could barely keep any of them on the shelf longer than a few days.

We do hear from people that they are abandoning their screens. Sometimes it is just too much to spend all day on the phone and computer and then read on a tablet. There is something magical about holding a book in your hand. The trend says that people are figuring that out. We hope it lasts. We remind people that you can’t gift an e-book to a friend in need. You can’t get an e-book signed. You can’t see what someone is reading on the El on a tablet. Books can be conversation starters. We know a couple who met on the El years ago because they were both reading the same book. Books connect people.

The Amazon brick-and-mortar is interesting. We don’t call it a bookstore, because it isn’t. Everything they do is data mining. It isn’t anywhere near bookselling. The whole thing ended up being responsible for all of the bookstores to come together as an alliance. So in the end, there was a silver lining. I have yet to hear of anyone going there and having a positive experience, so I’m not worried about the future of bookselling in that regards. It worries me more on a larger scale as a human and as a consumer. But that is a totally different conversation. 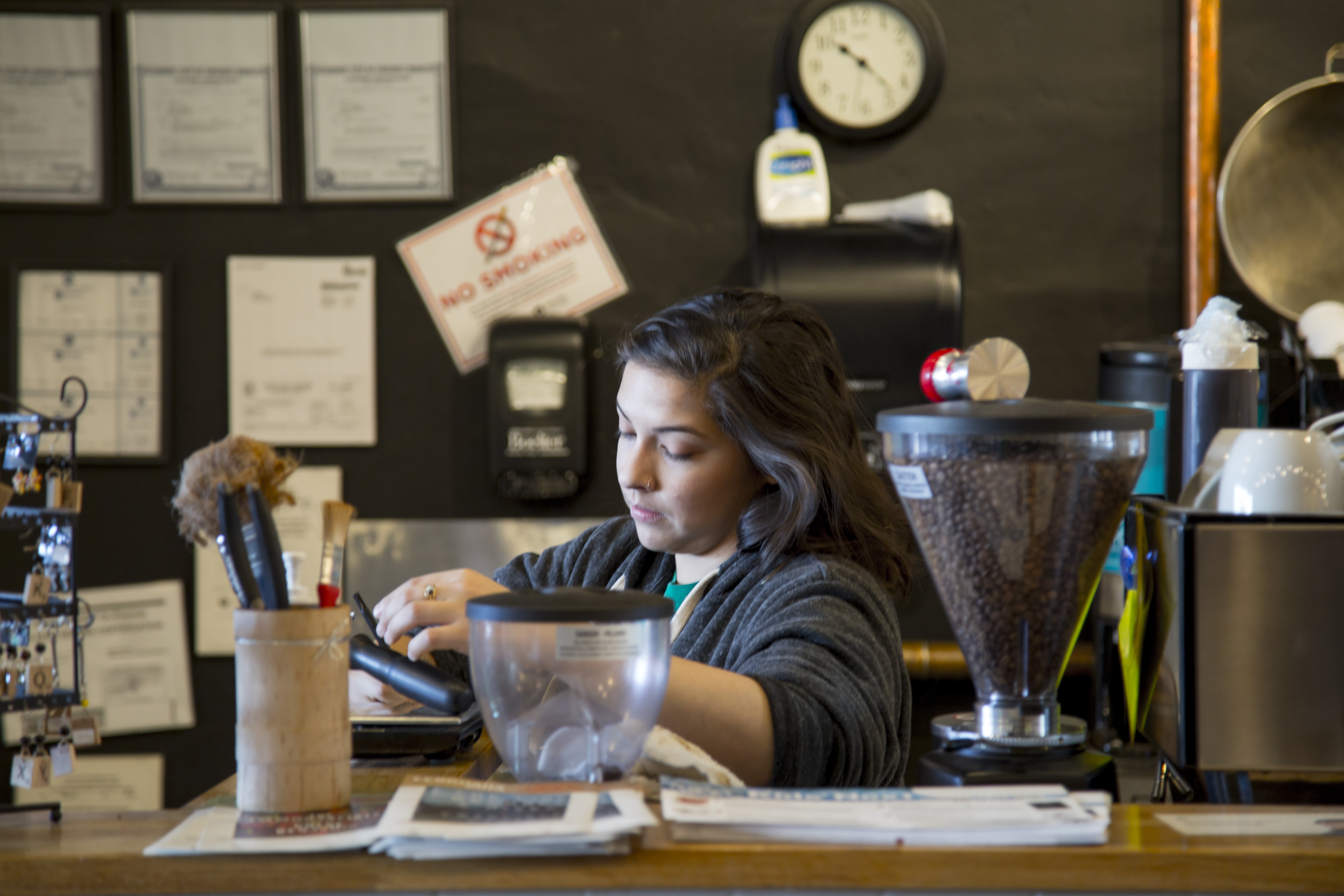 What would you say is the proportion of book sales versus café sales?

Book sales are the majority of our sales. It might feel like the volume of café sales is higher, but books are our bread and butter. I’d say books make up seventy percent of our sales. The café and sidelines make up the rest.

What have been the most popular sellers?

We have a number of books that we sell several copies of on a weekly basis, ever since we opened. “The Southern Reach Trilogy” by Jeff Vandermeer, “American Gods” by Neil Gaiman, “The Alchemist” by Paulo Coelho, “Ready Player One” by Ernest Cline, Elena Ferrante, Karl Ove Knausgård, Margaret Atwood—then the authors we really love. Anything by Rebecca Solnit sells really well, as does Angela Davis, Chloe Caldwell, Yuri Herrera, Samantha Irby. We sell a good deal of poetry—Kaveh Akbar, Kevin Coval, Eve Ewing, Danez Smith, Nate Marshall, Alejandra Pizarnik.

Nonfiction: “They Can’t Kill Us Until They Kill Us” by Hanif Abdurraqib, “We Were Eight Years in Power: An American Tragedy” by Ta-Nehesi Coates, “Evicted: Poverty and Profit in the American City” by Matthew Desmond, “How We Get Free” by Keeanga Taylor, and I could keep going forever on this. But you get the idea.

What types of events does Volumes host?

We host a lot of events. We have many regular events. We host story time twice a week, Wednesdays and Saturdays at 10am. Sometimes special story times like Yoga Story Time or one with a special guest children’s author.

Tell me about your relationship with other bookstores in the area and across the city.

Chicago booksellers are very friendly people. We all just attended a national bookseller conference and likely spent far too much time together. We enjoy each other’s company maybe too much? But really, we are friends. Allies. We drink together. We cry together. We support each other. It is really great. We love them. In the last two years we have created the Chicagoland Independent Bookstore Alliance that really addresses this. We are allies in books. We are allies in life. We succeed together.

Given the challenges, what keeps you going?

The people. The connections we make. Two years in and we feel like we have so many great new friendships that we’re so thankful for. We feel that there are continued conversations with all these people as soon as they walk through the door. It’s very intimate, very personal. We know when people are pregnant because of the books they order. And we know when people are going through grief. The best part of owning and working in a bookstore is that we feel like we get to fall in love with people every day.