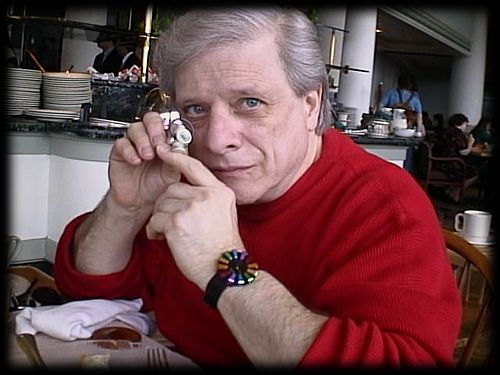 It was 1994 and I was a nerdy, young, first-time novelist. (Things haven’t changed that much, just my age and the number of lines on my face.) Back then, though, I was just learning the ropes of the book world, trying to appear semi-professional and constantly terrified of embarrassing myself.

One Saturday afternoon, I found myself at Chicago Comic Con, sharing a long signing table with a dozen or so other mid-list horror and science fiction authors. The table was prominently positioned in the cavernous lobby of the Rosemont Horizon and we all had our little paperback originals with their foil covers of demonic children propped up in front of us like at little lemonade stands. I will never forget, as long as I live, the moment that the diminutive man with the aviator glasses and razor-sharp part in his hair appeared like an avatar in the glass entranceway a hundred feet away.

I recognized him immediately. The brief time that it took him to enter the facility, notice our table and come over to say a few words seemed to last an eternity. My heart raced as he slowly approached with the swagger of an intellectual gunslinger. I knew him from the many readings, signings and public appearances he had made over the years. I thought of all the honors he had accumulated in his long and winding career?—the multiple Hugos, Edgars, Nebulas, Bram Stokers and Writers Guild of America awards. I thought of the withering sarcasm and brutal honesty he bestowed upon friend and enemy alike. I thought of the super-cool Borscht-belt comedian provocateur image he cultivated.

For God’s sake, this was the man who not only created the greatest episode of “Star Trek” ever written, but also had been a contestant on “The Dating Game.”

The closer he got to the table, the more I became mesmerized by his face (and more convinced than ever that he would barely notice me). I studied that boyish, old-soul visage, those mischievous eyes. For some reason, as he drew nearer and nearer to my little pathetic corner of the Kool-Aid stand, I started ruminating about his genius. I thought of his masterworks: “A Boy and His Dog,” “I Have No Mouth and I Must Scream,” “Paladin of the Lost Hour” and “Mefisto in Onyx.” A master of the miniature epic, he was the greatest short story writer in the English language.

Thinking back, I conclude that he transcended the genres in which he worked by doing one simple, beautiful thing in every word, every sentence and every paragraph that he crafted like no other: He told the truth. His truth. Our truth. Often cruel… but as inevitable as rain. It’s there in openings such as, “As if emerging from a dark dream, it suddenly occurs to me that I’ve spent at least half my life looking for my father.” And it’s there in these devastating last lines of “Jeffty is Five”—

“It’s a good world, all things considered. It’s much better than it used to be, in a lot of ways. People don’t die from the old diseases any more. They die from new ones, but that’s Progress, isn’t it?

Somebody please tell me.”

I’ll always remember that day at the Chicago Comic Con, in that drafty, noisy lobby, when Harlan Ellison finally sidled up right in front of me. This was Harlan-Effing-Ellison, the greatest short story writer who ever lived, standing inches away from me and gazing down at my little modest paperback.

“The Black Mariah?” he said and just hearing the title of my book enunciated in his trademark gruff Yiddish fast-talk gave me goose bumps. He picked up my book and took a closer look. “They sent me an advance copy of this thing… and I read it.”

From my seat I gaped up at him. I was probably breathing through my mouth. “Y-you read my book?” I marveled.

I slowly stood up, grabbing my chest and feigning a heart attack. “You liked my book? You—Harlan Ellison—actually liked my book.” I imitated Redd Foxx (I’ll pause for you millennials to Google Redd Foxx). “I’m coming, Elizabeth. This is the big one. I’m coming to join you, Honey.”

All through my humiliating display, Harlan Ellison simply stared at me and waited for me to finish. When I ran out of breath, he just looked at me and shrugged and said, “I just said I liked it… I didn’t say it was ‘Les Misérables.’”

Harlan Ellison told me the truth. He told the truth to everyone in his life, friend or fan, faithfully, habitually, in his work, in his art. He wrote fiction, mostly, some of it the wildest, most imaginative fantasies ever wrought, but his fiction was the truth beneath the surface. Uncompromising. Relentlessly, stubbornly original. Heartbreaking in its humanity. Savage in its frankness. Ellison was the Jackson Pollock of anger and the Henny Youngman of veracity. I idolized him… as a mentor, an inspiration, a role model. I also considered him a friend.

Back when we still used answering machines, I would come home from work and once in a while there would be a message for me that always started, “Bonansinga? Ellison here. I wanted to ask you if….” And he would always need some piece of literary or film minutiae—some injustice that needed to be rectified—and I would always keep the recording and play it for my friends, who were equally smitten with Harlan.

To paraphrase Edwin M. Stanton in response to Lincoln’s passing, Harlan now “belongs to the ages.” But his work will live on, continuing to tell the truth to each successive generation of readers. But as Harlan would probably say, it would never be “Les Misérables”… but it was not bad, not bad at all.

Jay Bonansinga is the New York Times bestselling author of THE WALKING DEAD novels. He has been a finalist for a Bram Stoker Award and the International Thriller Writer’s Award, and his work has been translated into seventeen different languages. He lives in Evanston with his wife, the photographer Jill Norton, and his two teenage boys, and is currently hard at work on his next novel. You can find Jay on-line at www.jaybonansinga.com and www.magnetikink.com