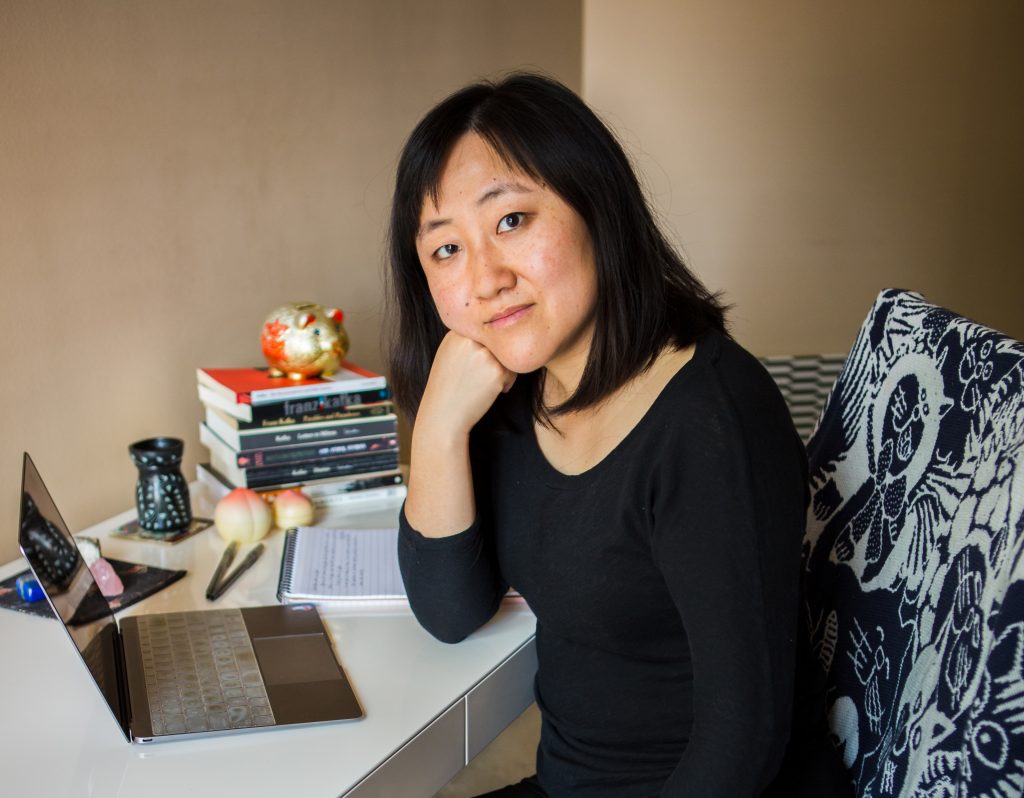 A dystopian tale of millennial adulthood with an immigrant story nested inside, “Severance”  dwells on the nature of work, capitalism, memory and dislocation. It’s funny, cynical and surreal. Ling Ma, who teaches fiction at the University of Chicago, discussed her debut novel with Newcity from her Ravenswood apartment—coincidentally the same apartment from which she began her debut novel before moving to Cornell University in Ithaca for her MFA in 2012.

Her protagonist Candace Chen lives in New York, producing Bibles for trade publisher Spectra. After Candace’s Chinese immigrant parents die, she drifts through work and romance with the disaffection and emotional coolness frequently ascribed to millennials coming of age post-internet. The city, the nation and the world are felled by Shen Fever, a mysterious fungal disease originating in Shenzhen, where Spectra prints its Bibles. Shenzhen is famous for its 1980s transformation from a market town into communist China’s first Special Economic Zone, now housing more than eleven million people. In “Severance,” this wunderkind of capitalism produces capitalism’s nemesis—a spore that turns victims into zombie-like “creatures of habit, mimicking old routines and gestures,” endlessly stuck in nostalgic grooves of familiar songs, family dinner rituals and favorite clothes. Shen Fever closes factories, malls and office towers, dispersing fleeing survivors into the countryside.

Ma worked for Playboy magazine and was caught in a slow, painful process of layoffs in 2009. She says her job frustrations played out in an apocalyptic short story which eventually grew into this book. “Working a job with not a lot of power is no fun, but being able to destroy things through fiction is,” Ma says. She traced her anger back to its source and wrote what she describes as a “meditation on work.” That earlier ninety-page piece—“Chinese Bible”—won the 2015 Graywolf SLS Prize, awarded to a best novel excerpt from an emerging writer. It forms the prologue of “Severance,” beginning in aptly Biblical language, “After the End came the Beginning. And in the Beginning, there were eight of us, then nine—that was me—a number that would only decrease.” The survivors, who are brand strategists, property lawyers, human resource specialists and personal finance consultants, can’t do anything, so they have to Google “how to survive in wild” and “how to build fire.” As Candace says of her apocalypse, “The End begins before you are ever aware of it,” which speaks as much to relationships and jobs as it does to the end of the world as we know it.

Like her character, Ma is the daughter of Chinese immigrants. “The story embodies my migrant nightmares. Especially under the one-child policy. What would happen if you are an only child and you have lost your ability to speak your first language?” It was her mother’s worst fear, so she sought to actualize that nightmare in her fiction.

Some of the sharpest observations of the book relate to cultural differences between Chinese and American outlooks. For example, Balthasar, the operations director of the Chinese printing factory, asks why Eric Carle’s “The Very Hungry Caterpillar” is so popular with American children. Candace suggests it teaches counting skills, but Balthasar comments on the insect’s greed. “He eats all the food and doesn’t share. What lesson does that teach children? To eat with no… conscience?” Ma highlights the contrast between individualism and collectivism, but notes the big change in China since she left in 1990 and now. “Previously, you waited in line in stores for supplies, whereas now there are huge supermarkets where you can touch the wares before you pay.” In her novel, Candace’s parents mirror the Ma’s own experience. Meanwhile, Candace shops as if there is no tomorrow and reminds us that after 9/11, “President Bush told us to go shopping.” 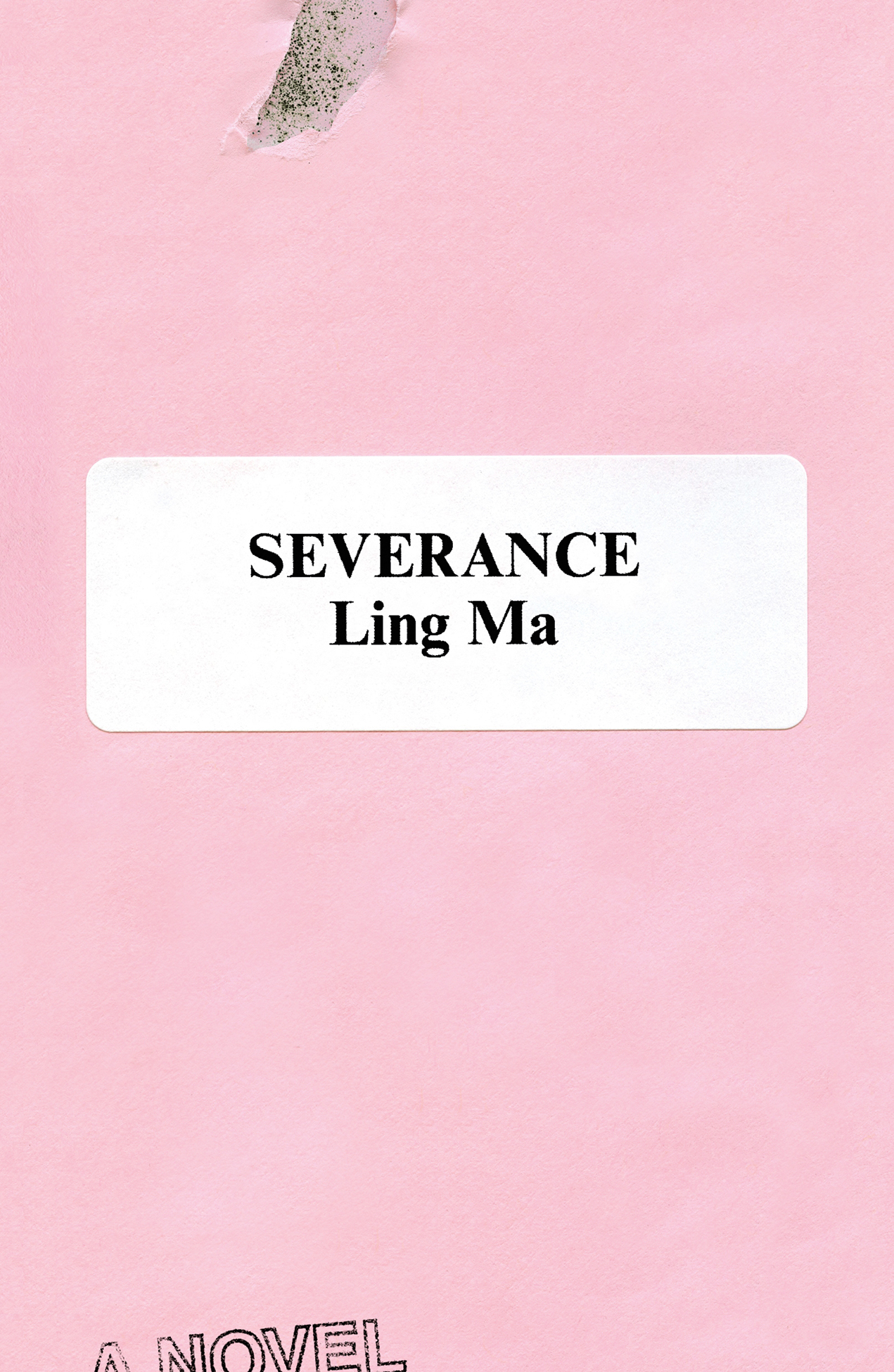 The cover of “Severance” by Ling Ma, showing the text in a white rounded box surrounded by pink.

Dealing with memories is one of Ma’s themes. “In order to keep moving forward it’s better not to revisit the past. In order to survive, we have to compartmentalize our various selves,“ Ma explains. In distancing herself from her immigrant self, Candace lives lives at arm’s-length. She sits off, observing rather than feeling.

In an earlier short story, “Los Angeles,” one of Ma’s character says, “How do I know, he once asked, it what you feel is real?” In “Severance,” it’s hard to distinguish between real news and fake news, or designer bags, knockoff prototype bags and cheap imitations. Ma writes with such a dreamlike quality it becomes hard to know if the events are real or imagined by Candace, who keeps a blog called “NY Ghost.” As the last person staffing her office and one of the last people remaining in New York, she captions her final photo, “If New York is breaking down and no one documents it, is it actually happening?” It’s funny and frightening at the same time.

“I’ve written without quotation marks for dialogue,” says Ma, who feels that this contributes to the dreamy quality. She was influenced by Terrence Malick, whose films she finds haunting and poetic. “How do I mash up two completely different aesthetics—the campiness of the zombie B-movie and something that’s poetic—those two things should not be together, right?” She imagined a B-movie voiceover, but one that was also heightened like in Malick’s “Days of Heaven.” She was also influenced by watching eight years of “Mad Men.” “That’s how I learned to plot, to thematically layer rather than making things happen.”

The book’s kernel retells the perilous journey of Mormons to Salt Lake City and the parallel migration of Candace’s parents from Fuzhou. The Chens encounter a land of plenty and are outsiders. In order to assimilate, it is best to accept they are not going back and they must adopt local customs and trappings, even if they don’t understand them. It’s through repetition they make meaning—a concept upended by Shen Fever’s symptoms of repetition. As typical immigrants, they work hard and perform “their Americanness, perfecting it to a gleaming hard veneer to shield over their Chinese inner selves.” Their pastor preaches an immigration narrative about second chances, hardship, belonging and having faith. The voice is omniscient, because, Ma explains, cynical, snide narrator Candace has trouble getting close to the emotional weight of her parents’ struggle. Later, having sealed off her Chineseness, she parks her memories and sets off on her own migration, repeating an essential severance for survival.