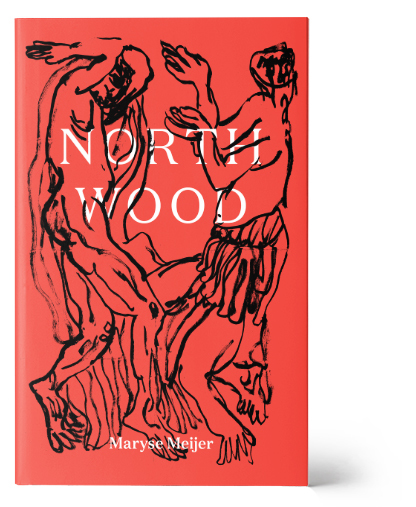 You don’t have to be a fifteen-year-old girl groped against your will at an underage drinking party to know there are big bad wolves out there everywhere, but it might help prepare you for the danger in Maryse Meijer’s dark fairytale of obsession and loss. Beautifully and mysteriously told in shards, in white print on black paper, “Northwood” opens with an artist holed up in a rented cabin in the woods to draw. She seems utterly unprepared to hold her own, keep warm, feed herself. The narrator finds a muse in a magnetic menace of a man whose hold on her clouds everything she does, sees and feels. “I drew you as I used to draw myself, at first to make more of you, later to get rid of you, and now I don’t draw you at all, there are other things, and I never got it right.”

Are these fairytale icons really there, or does the man change from woodcutter, fox, stream and tree to dragon, devil and sadist? It doesn’t matter. The ink in the artist’s pots flows like the blood from her veins under his brutality. The reader feels compelled to witness the couple’s dynamic and the shadow it casts on the artist, as much as it disturbed. Meijer’s sparse, original writing is intoxicating. Some entries are poems that skip around the page physically, some read like journal entries as if she woke up halfway through a sentence, struggling to grasp the precious details of a glimpse, a lovesick memory like heroin. The scars the man leaves on the artist’s heart and body are like keepsakes: “Your hands on my throat, that bruise lace they left behind—those crown jewels, that ghost necklace.” Did you ever wonder why Red Riding Hood’s sick old grandmother lived deep in the dark woods? This novel reminds me that ours is not to wonder why or brace ourselves. We will leave no crumbs to mark our trail when we slip into this story.