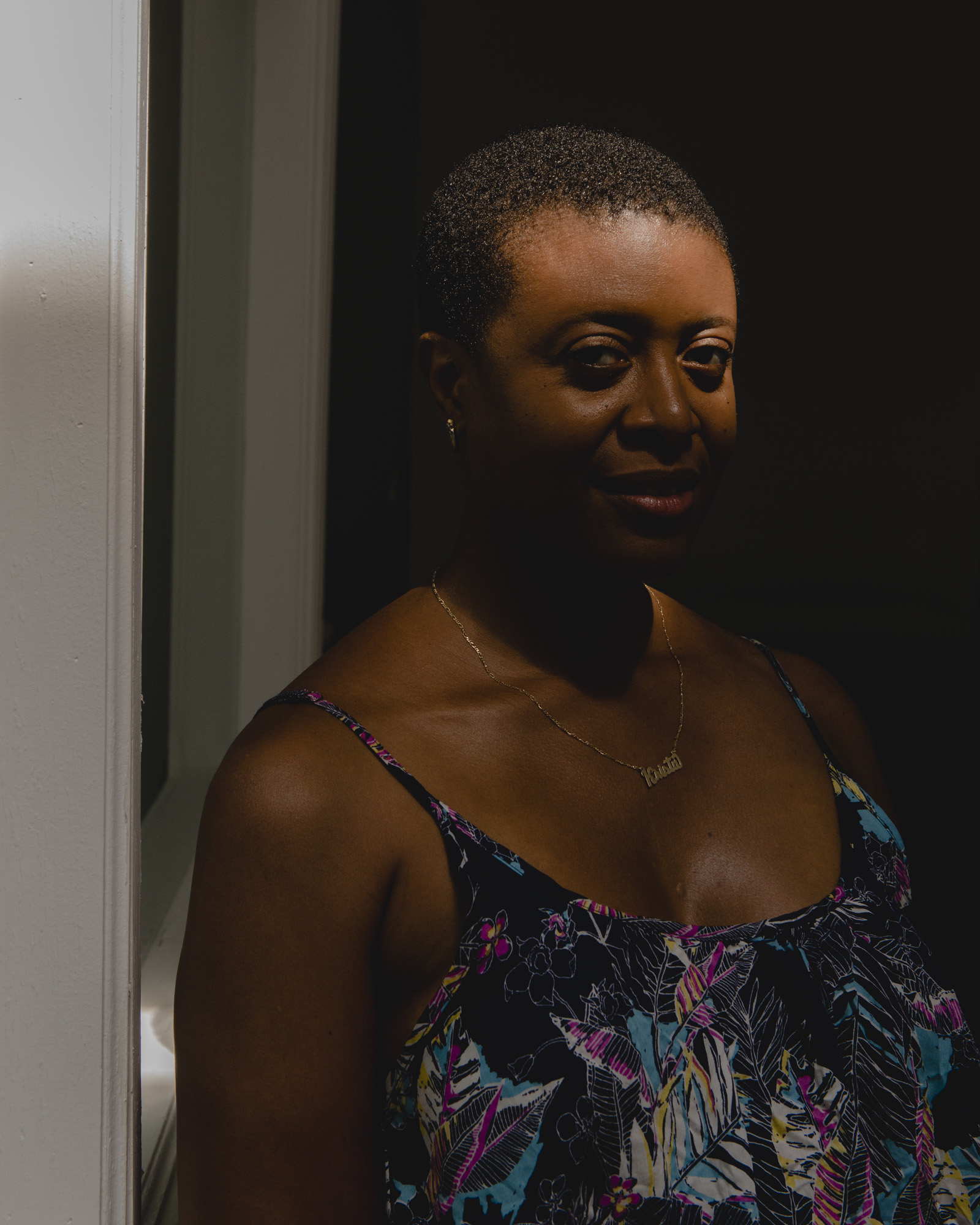 A work of art stitched together with collages, family stories and photos, “Under the Knife,” by writer and visual artist Krista Franklin is a limited-edition book published by Candor Arts. This transgenre book includes library cards, a medical bracelet as an epigraph, a mammography and an image of Franklin in the hospital. I interviewed Franklin about her exploration of sickness, death, trauma, memory and forgetting, ancestral inheritance and the influences of music, art and film on her work.

What inspired you to make this book?

My experiences with uterine fibroids, as well as the story of my maternal line—a focus of my work for several years. I wanted my mother and her sisters to write their story, but they never would, so I wrote a ruptured, “hearsay” story of (theirs), which I tied in with my own story. It started out as a straightforward memoir that I wrote on my recovery bed for about a month, and then I decided to take the narrative apart, deconstruct it, write over it, paint and collage over pages, redact, and introduce personal and family photographs.

Can you tell me how, when and why you decided it would be more a work of art than a traditional book?

Essentially, it turned into an artist book after I got to a point where I couldn’t write any more. I took the book to the cutting floor and transformed it. I have a deep love for artist books, and have made a few. This one is special, though, because it’s been shaped in collaboration in design with the Candor Arts team. 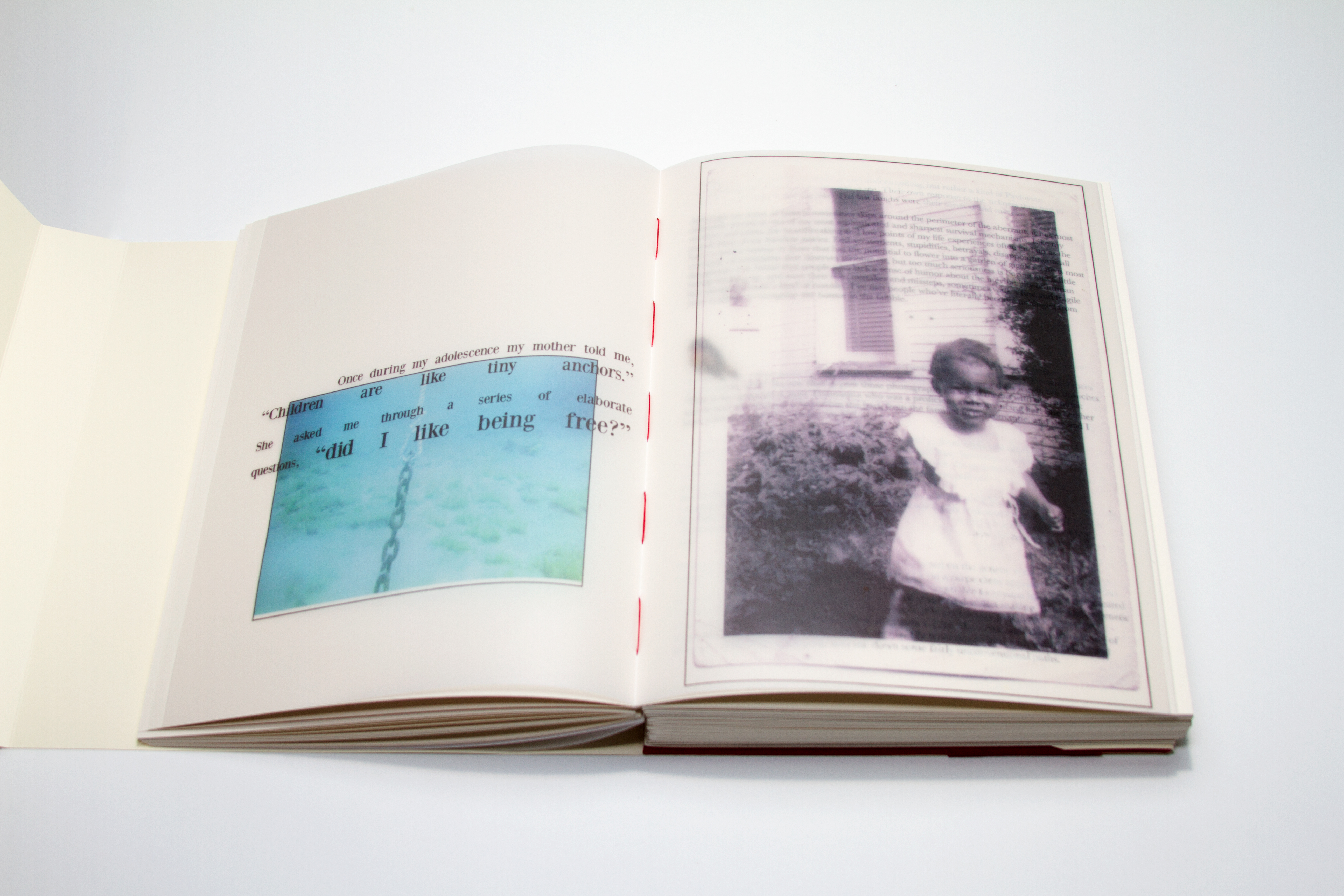 How did you determine its organizing principles?

It was mostly organic. But it’s been influenced by many things, including Jenny Boully’s “The Book of Beginnings and Endings.” It gave me permission to embrace the idea of memory being myth and fiction, of time-travel and the concept of “the loop”—things moving in a circular and repetitious way like time and memory and legacy work. The library catalogue cards are another organizing principle. There’s a card called “Death of the Hero,” and most of the pages after that deal with my grandfather and his story, and there’s another card called “The Artist’s Life” and the pages after that tell some of the stories around the influences and experiences that have shaped my sensibilities and aesthetics.

Words, phrases, whole paragraphs of your narrative in “Under the Knife” are often printed lighter than other passages. Some are even marked out. For those passages, I had to get closer physically to the book, which made me feel like I was being invited into an intimacy, like leaning in to hear a secret. They also made me feel like I needed to work harder to get underneath that which was censored, to learn parts of the story that weren’t given prominence. That was my experience.

There are passages and ideas that I want the eye to be drawn to and there are things that I want obscured and hidden. There are names I redacted to protect identities, including my own. Part of the story is the paint, the marker, the collage, and not the word. The seeing and not-seeing of things is an integral part of the experience.

There’s a passage in your book where your mother catches your grandfather with another woman, but rather than get angry or accusatory, she just sees him, they see each other. Would you say your treatment of the characters in your book works similarly?

The idea of seeing someone speaks to a kind of understanding and compassion for brokenness and imperfection. One of the legacies that my mother bequeathed to me is to try to tell the truth of things—even if it’s your own truth—regardless of how messy it is. Writing about those we love is fragile business. Writing about yourself honestly is even harder.

What role does the body play in your work?

It plays a huge role. My previous two books deal with the body, too—mine as well as other black people who are under siege in this country. I consider “Under the Knife” to be the last in a trilogy on the body. My experiences on the surgical table have greatly influenced my artistic considerations on the corporeal, as well as my upbringing in the Pentecostal church, where I learned the body is a vessel, one that can be overtaken and, to an extent, puppeteered. It’s long been an intellectual and spiritual preoccupation for me. “Under the Knife,” itself, is an actual body that’s been taken apart and stitched back together in a number of ways, much like my own body.

In “Under the Knife,” you note that your mother warns “to not go looking for folks and digging up past family business, because sometimes you won’t like what turns up.” What was the process of excavation in writing this book?

The process was about my own excavation. All of the stories are stories I’ve been told since I was a kid. Usually because I asked what happened, and because the women in my family aren’t ones to mince words, they gave it to me raw. There was nothing for them to be ashamed about, so why lie? People are imperfect. They make mistakes, they lie, they cheat, they drink too much, they fall in love with people who are wounded and then wound. They fuck up, and they win sometimes, too.

Tell me about the influence of Afrofuturist and AfroSurrealist thought on your work: “Under the Knife,” but also your recent exhibition “…to take root among the stars.” at The Poetry Foundation.

This is a little more complicated. My work has long been associated with the cultural movements Afrofuturism and AfroSurrealism because I often use the principles and ideas of those movements to think through the work that I make. I have been studying and thinking through Afrofuturism since the late nineties through studying the work of science fiction writers, cultural theorists and filmmakers I deeply admire and respect (some of whom may not consider themselves Afrofuturists) such as Alondra Nelson, Octavia E. Butler, Nalo Hopkinson, Greg Tate, Sheree Renée Thomas, John Akomfrah and Kodwo Eshun. I’m also influenced by sci-fi films and narratives that engage the alien and the android as themes in my work. As someone who has had to undergo multiple surgical procedures, the idea of the android is interesting to me and a way I’ve processed some of my own experiences, being human and somehow not because of cuttings and implants and removals that I’ve had to endure to survive.

AfroSurrealism, a term coined by Amiri Baraka in his writings about Henry Dumas, and D. Scot Miller’s “AfroSurreal Manifesto” became of interest to me around 2011 when poet Ruth Ellen Kocher sent it to me to read. That manifesto articulated many experiences and ideas that I’ve held about my own life for years, particularly my mystical and spiritual leanings, my ideas about the paranormal, gender and sexual identity, and the surrealism of the black and brown experience. I have unorthodox ideas about heredity, the dead and the living and their interconnectedness, about the spiritual and physical worlds being separated by a very thin veil and about cellular memory and information being passed down through the generations through the womb.

“Under the Knife” deals mainly with the idea of cellular memory and that there are things that I didn’t want to pass down through the generations through children of my own, and that could have had an effect on my body. I believe that the body responds to thought patterns, and that cells can go rogue because of thoughts combined with heredity. This could perhaps be associated with my studies in Afrofuturism and AfroSurrealism. “…to take root among the stars” is a very separate project that tracks archival material and writings (both historical and contemporary) that traces evidences or examples of Afrofuturist and AfroSurrealist ideas and thought. 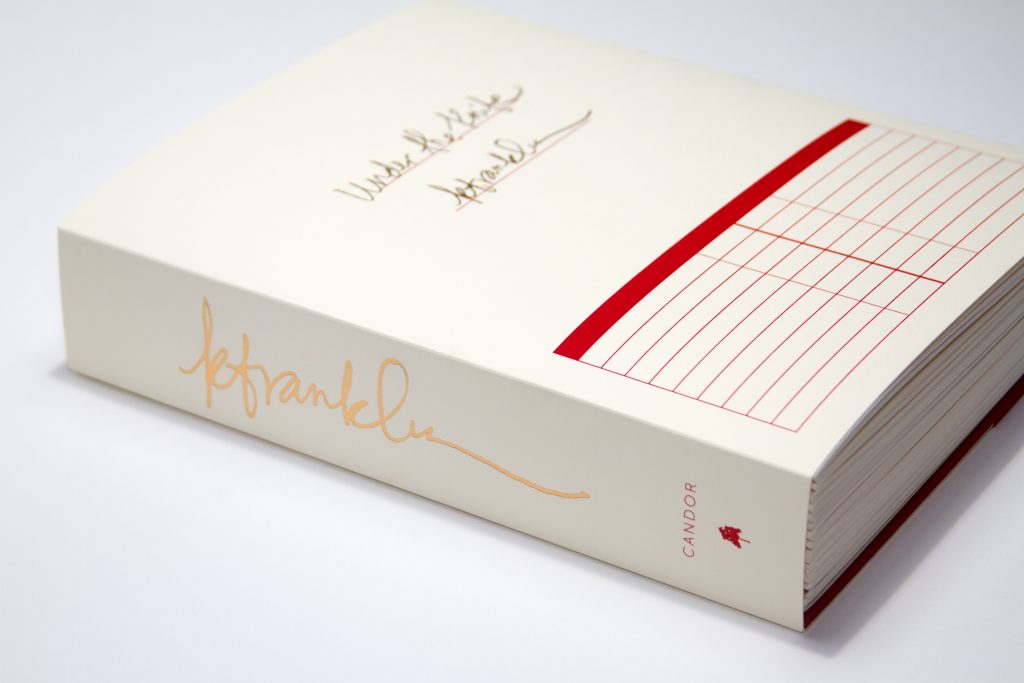 How long has “Under the Knife” been in the works?

It’s been in the works for over eight years, but it was written and created in about a year and a half.

What was it like to work with Candor Arts?

It’s been a great learning curve working with Candor Arts. What I’m truly grateful for is their dedication to creating the book that I envisioned “Under the Knife” to be when I approached them. Their commitment to that vision is something for which I will forever be grateful.

What’s been the most gratifying part of birthing this “ten-pound baby?”

The object itself is extremely satisfying. Candor Arts and I really made something remarkable that I think we can all be proud of.