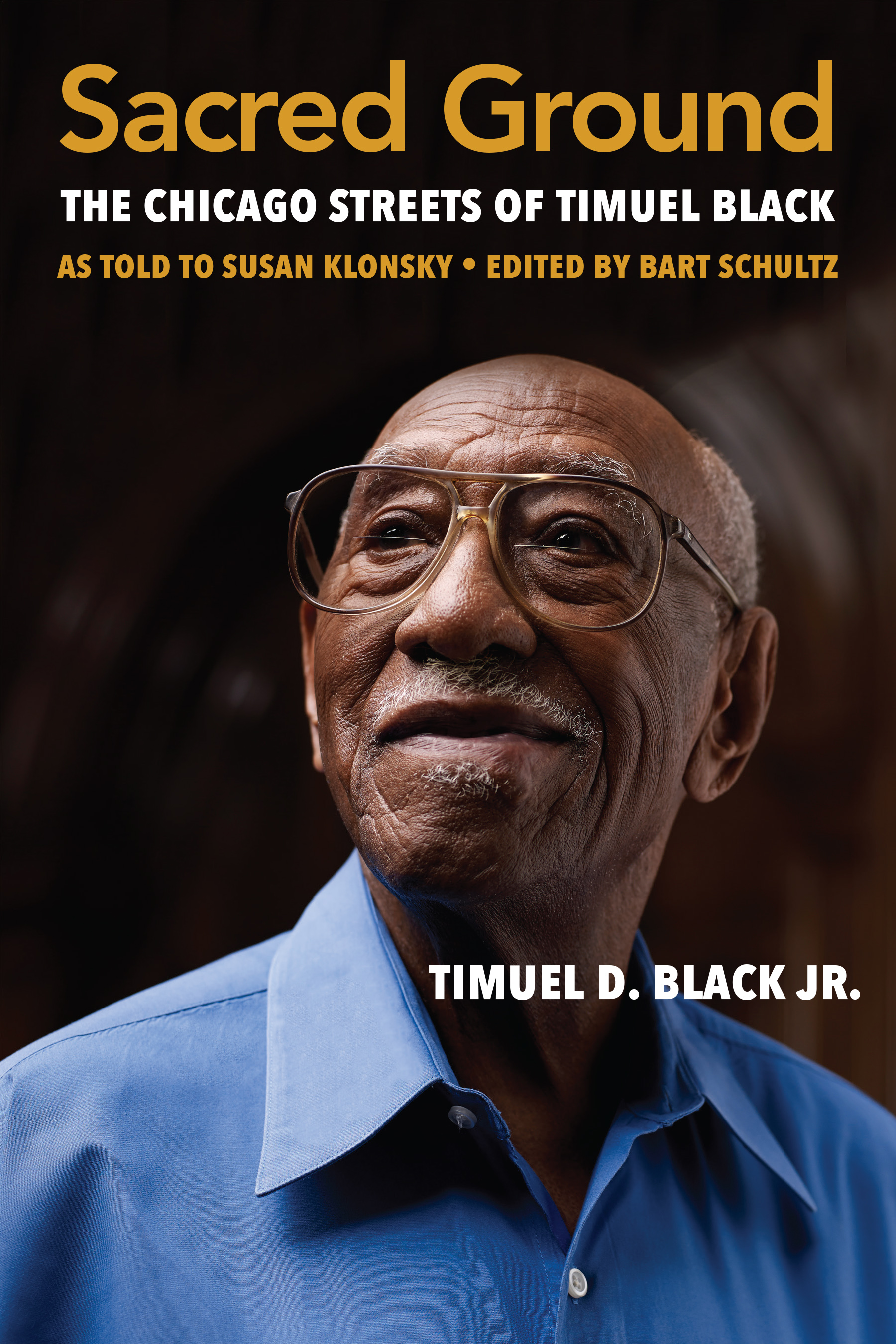 Over the past century in the city of Chicago, there have been a few—less than a handful—of individuals who could be considered “human treasures.” Studs Terkel was one of them. Undoubtedly, Timuel D. Black, Jr., both the subject and the author of this book is another. Black, a political activist, educator, advisor, mentor to countless youth, would-be politician, labor organizer and city administrator, has long been in the maelstrom of urban change. Dr. Black has recently become a centenarian, turning one-hundred on December 7, 2018. In “Sacred Ground: The Chicago Streets of Timuel Black,” he reflects upon his life and his community on the South Side of Chicago. This highly personal recollection is conversational in style. Perhaps one has to have met Black to understand that this book is an embodiment of his character—frank, warm, witty, open and eternally optimistic.

Black has had a Forrest Gump-like existence. Where Gump “fell” into historical events, the author has always had an active, driven life. He was involved in many of the major events of the twentieth and twenty-first centuries. He was a child of the First Great Migration, experienced Chicago’s great Jazz Age of the 1920s and 1930s, fought in World War II, helped liberate the camp at Buchenwald (that transformed his life), was blacklisted during the McCarthy era, was a key figure in the Civil Rights movement and advised Dr. Martin Luther King Jr. and Harold Washington. And the famous individuals that he has personally known? He took tap lessons with Bill “Bojangles” Robinson, went to high school with Nat King Cole Jr., organized with A. Philip Randolph, studied with John Gibbs St. Clair Drake and advised President Barack Obama. Black reflects upon these experiences within “Sacred Ground” but does not make the book all about him—he centers it on the black Chicago community that nurtured, grounded and supported him.

Two things make this volume stand out. One is that “Sacred Ground” is a personal journey. Black discusses two times in his life when he experienced great depression—his sense of hopelessness during World War II and the loss of his son Timuel Kerrigan Black in 1993. This emotional history makes it a unique, highly relatable read. Second, Black is clearly not stuck in the past. He discusses both the Black Lives Matter and Me Too movements and sees them as positive foreshadowing for the future. “Sacred Ground” is a must-read for any citizen of Chicago who wants to understand the racial and political dynamics of our city.

Gerald R. Butters Jr., Ph.D. is a Professor of History at Aurora University and a lecturer in the Masters of Liberal Studies program at Northwestern University. He is the author of four books including “Beyond Blaxploitation”(2016), “From Sweetback to Super Fly: Film Audiences in Chicago’s Loop”(2015), “Banned in Kansas: Motion Picture Censorship” (2007) and “Black Manhood on the Silent Screen” (2002). One of his proudest achievements was winning the Timuel D. Black Fellowship in 2010.