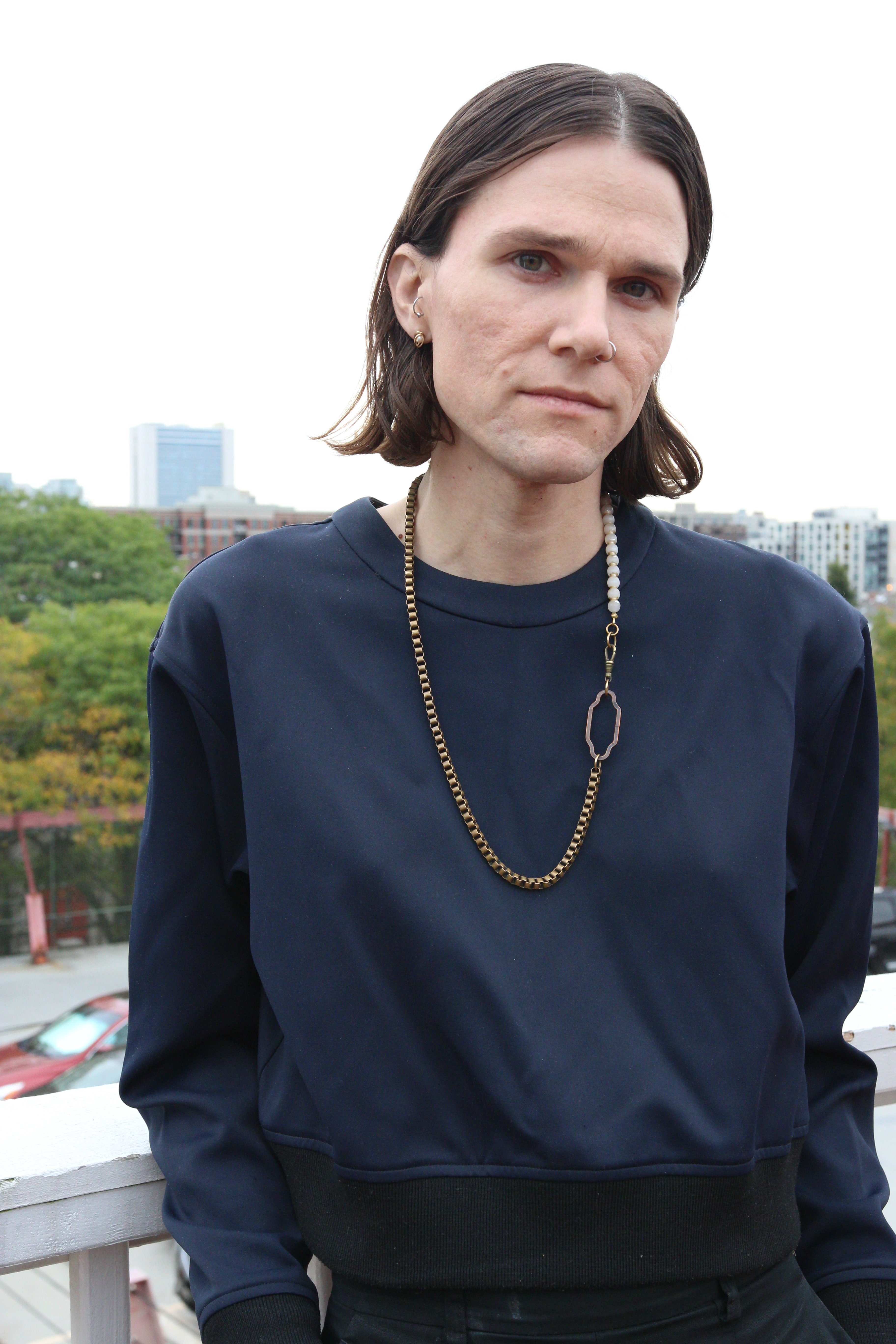 You cover a lot of ground. In your first book “Syzygy, Beauty” and now “Time is The Thing a Body Moves Through,” you are itinerant in geography and on the page. In the new book, you say, “My relationship to who I was is tenuous.” What are you aiming to show regarding time, distance and change?
I’m trying to complicate narratives of change and progress, not so much the motion from one place to the next, or one way of being to another, but trying to find a constant state of revolution and necessary upheaval. There’s the change of gender, which for me, was not a change from one coherent state (boy) to another state (nonbinary), but a continual unfolding, where arriving presents another opportunity to change, rather than the achievement of a stable, fixed identity. There’s also a churning of political revolution, a constant questioning of belief, a desire to better serve the places I find myself and the people I live with. Culturally, we are in desperate need of change, so I’m interested in finding ways to make that change possible, to make it as easy to reinvigorate the past as it is to set aside the ways we used to be that no longer serve us. “It’s okay, you don’t have to be this way anymore” can be a radically liberating idea.

In both your books, you thread reflections on artists such as Meret Oppenheim and Felix Gonzalez-Torres through personal lyric or narrative. Why do you splice art criticism with deeply personal memories of love, sex, loss and the body?
For a long time, I didn’t let myself write about visual arts, I was too intimidated by that world and the way art critics spoke of the work. I’ve never had so much as an art history 101 course, or an intro to painting class. But I surrounded myself with artists, and loved art, which shaped how I understood myself and my world. I came around to appreciating the engagement and education I did have, what I learned by looking and talking. Once I accepted the value in my experience, I was interested in trying to write from that place. I’m trying to value what exists outside of institutions, looking especially at personal connections, subjective reactions, which is also a way to celebrate the people who are excluded from those institutions, a more anarchic thinking.

In “Syzygy, Beauty” you say you don’t believe in weddings. In “Time is the Thing a Body Moves Through” you get wed. What happened?
The short answer is that I fell in love with someone who wasn’t a United States citizen, so it was less about changing my beliefs and more about navigating the state’s systems to get what I wanted (love is a negotiation). Of course, it’s not so simple and my partner and I find ourselves stalled in Trump’s immigration disaster—married before he took office, but the process only really getting underway after inauguration. I still reject marriage as a tool of the state and we cling to the idea that on the other side of all this we can get legally divorced and continue with our relationship, which is dreamy and romantic to me.

“We aren’t supposed to talk about some bodies” you wrote in “Syzygy, Beauty,” which stylistically is lyrical and indirect, no one is named. In “Time is The Thing a Body Moves Through” you write very directly about bodies and what bodies can do sexually. Lovers and friends are named. The voice seems confident and unafraid to reveal itself. Why the different style and why this openness now?
Yes, one of the things that I tried to do in “Time” is to say a lot of the things that I was avoiding saying in “Syzygy.” If my first book is about inhabiting the lyric space, so often obscure and metaphorical, the second is about owning up to what I believe and the choices I’ve made, which can be a kind of horrifying thing to do in print—being visible means being vulnerable. As far as why, I’m not sure I have a good answer. In some ways, it’s a fuck you to people who don’t want me to exist, but there’s also something about holding myself accountable. I’ll say, though, that I gave my friends a choice to have their real name or to replace it with a fake one, and they all chose the real names! Which suddenly made it all feel much more intense and highlighted the reality that we’re never actually writing alone.

How does your trans genre writing complement complicated ideas about gender and identity? You also sometimes talk about eschewing labels but also talk about being transsexual—what do you prefer to be called and how important is that to you?
Much less important than it used to be! I’ve identified widely and inconsistently over time—bisexual, gay, dyke, trans, queer, genderqueer, nonbinary and so on. And many of those identities felt vital and necessary when I claimed them. After many years of stumbling around in that language, I finally came to understand that it was fine for none of those words to resonate with me and that I didn’t have to participate in that labelling if I didn’t want to, which was very freeing. I’ll still accept “trans” as an identity and will describe myself that way, because I still find utility in the language (political, cultural, sexual, medical). But in general, I’m uncomfortable with the idea that a gender or sexuality could be pure, that a word like “woman” or “gay” could mean something coherent, and I’m more interested in messing around with the language than in upholding it (one reason the word transsexual pops up a couple of times in the book).

What was your process with this book? Was it conceived as a single project?
An ongoing project, maybe, rather than a single project. I started out with a meditative daily writing practice, describing ice in prose, that began when the creek outside the shack where I used to live froze. That continued for a few months, then I started to let myself explore the images more broadly, which brought in this association between the ice and the crinkly blue candy wrappers in a Felix Gonzalez-Torres piece. That’s around when I started spending time with Simon, one of the main figures in the book, a close friend and occasional lover who had his own obsession with images of ice. That writing continued for a few years, meditating around the ice and the relationship with Simon. When the relationship ended, I found that I couldn’t write in the same style, but I wanted to continue the project. That’s when I found my way to the second form in the book, along with a new relationship. While the first part of the book is written in verse (kind of), this second form was all prose, a different energy to capture the difference in romances. It wasn’t until the last year of writing that the book came together as it is now, and there were many more pages written than appear.

What is your artistic and political lineage?
Trans punks, girly anarchists, prison abolitionist poets, performance artists who read essays, anyone who understands art to be a function of liberation. Probably the lyric essay. A lot of what I encountered when I was first leaving my hometown and coming into my sense of self still resonates with me—the AIDS Coalition to Unleash Power (ACT UP,) a John Rechy book, an X-Ray Spex record. If someone would have given me a Vaginal Davis zine in high school it would have saved me years of confusion. But I’m glad you asked those two together, the artistic and the political. I learned more about art from encountering Sylvia Rivera’s activism than I did studying in the academy and more about politics from lesbian poetry than in the newspaper.

You write of “the relentlessness of people in love…of losses that are shared…of bodies that are different”—capturing a feeling of winning over the odds, of humans being humans. It feels hopeful, but a lot of the book seems to be about struggle, political and personal. What are your concerns?
I’m a slow writer and have been thinking a lot about the difference between the political conversation when the book was written and the political conversation it is being released into—both the discursive leap from the Obama administration to Trump, and what people call the “trans tipping point,” one of those regularly scheduled moments in U.S. culture when public attention is directed toward trans people, believing us to be somehow new. Anyway, if I were writing the book again now, I’d probably feel compelled to have the conversation differently because the broader conversation is different, but I don’t think my concerns have really changed. The culture that I come from, the Midwestern settler culture that made me white and tried to make me a man, continues exerting itself, and trans people face similar and sometimes increased levels of structural violence, compared to before this whole media circus started. Whether it’s Hillary Clinton committing war crimes in Libya and Obama building the machine of mass surveillance or Trump targeting the Palestinian people and the Republicans dismantling the EPA, the mechanisms of the state and the ideologies of whiteness are still laser focused on perpetuating settler culture—military dominance, environmental exploitation, the nuclear family unit, always about taking rather than building. It’s bleak, when the same problems perpetuate, but I’m glad that the book still feels hopeful—I’m not ready to give up on that, knowing that people find hope in places far more dire than the place I am in.