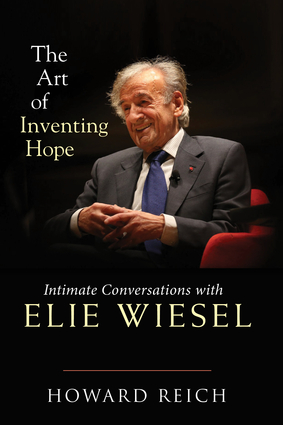 Imagine if, over a period of several years, you were granted the privilege of having a series of one-on-one conversations with a learned and congenial figure who also was one of the world’s foremost authorities on a subject of abiding interest to you, personally, and to your family? What if you were permitted an unanticipated level of access to the probing mind and expansive heart of an intellectual hero—someone you, along with the wider world, have esteemed, and that you found this person to be as wise as they were approachable, as unassuming in manner as they were bountiful in insight. Further, imagine if you can, that the figure with whom you have had this series of providential audiences is a direct witness to history, its chronicler and steward, a clear, plangent voice calling to posterity, but also an individual compelled by cruel circumstance to withstand depthless horrors. If such a figure were to make time for you—just you, granting you their fullest attention, their least-guarded self—what would you say to this figure? What would you ask of him?

It is precisely this sort of confounding good fortune that animates Howard Reich’s “The Art of Inventing Hope: Intimate Conversations With Elie Wiesel.“ Reich, a columnist for the Chicago Tribune who mostly covers music, weaves together the fractured tale of his own family’s sad legacy—both his parents were survivors of the Holocaust who locked away the suffering they endured in a vault of adamant silence, a silence his father never broke, and one his mother only obliquely, disjointedly, ended. Reich writes with great tenderness about his mother’s break at 2001, at the onset of dementia, overpowered by the resurgence of the trauma she had suffered as a young girl in her native Poland, fleeing and hiding from the Nazi execution squads who in 1942 had marched into her village and slaughtered nearly all its inhabitants. Reich’s long experience as a journalist serves him (and us) well, since he demonstrates an admirable doggedness in unearthing the particulars of his parents’ terrorized wartime days—he visits archives and interviews surviving witnesses in his extended family throughout Europe, pores over documents in Holocaust museum collections here and abroad, visits the sites of his parents’ too-numerous sorrows.

But Reich is also writing as a son, a nice Jewish boy from Skokie, who only learned later that not all moms sit tensed in sleepless vigilance, peering out the window in their darkened living room, every passing car a threat; who did not realize that not all dads toggle between coiled silence and explosive anger. And it is Reich the son who, in addition to exploring the history that throttles his family and all the other families along the well-tended streets of his suburban youth, turns his investigator’s eye to the question of trauma—its corroding power, the ways we pass it from one generation to the next. In tandem with his historical investigation, Reich researches and details the findings of psychiatrists and social workers about the warping legacy of trauma upon the sufferer, and its distorting ripples outward to touch all those close to the sufferer. Reich was able to witness the effects of trauma in his own house, and in most of the houses on his block, and all through his town, since Skokie was a Holocaust survivor’s enclave peopled by families bowed by the weight of horrors remembered and horrors suppressed.

What elevates and expands this book beyond the confines of a purely individual inquiry into one man’s family story—an inquiry that would no doubt prove worthy and valuable in and of itself—is the presence of Wiesel’s gentle good will, his studious and deliberative perspective, his moral clarity. In addition to the conversations of the book’s title, Reich also does an admirable job of culling Wiesel’s writings and speeches to amplify and refine many of his observations and assertions, which arise in conversation in a less formal, less rigorous fashion, and as a consequence are not expressed as elegantly. In this sense, Reich proves a dutiful acolyte—he is not merely a recipient of wisdom, but attentive to its expression and resolved to honor the intentions of his mentor by selecting the more robust and resonant manifestation of an idea. Because to seek the counsel of a man like Wiesel is of necessity to do so in awareness of the long years of study and reflection that precede one’s first encounter with him, that over the course of his mentor’s long career, there will have been many re-articulations, many refinements, many expansions and connections drawn and redrawn. So, for example, when Wiesel discusses the great faith he places in the power of the written word, in the collection and promulgation of stories, of wisdom, of the fine-grained and easily lost details of lives as they were lived in a world consigned to flames, and especially, the moral force that such words can exert—a far-ranging series of discussions taking place in different places over a span of several years, Reich shares with us a sense of these, of the ebb and flow of his questions and Wiesel’s answers, but also will offer us the distillate of these ideas, with lines like: “As Wiesel has written, ‘Words can sometimes, in moments of grace, attain the quality of deeds.’”

In a world that has been overtaken by the material, the transitory, “The Art of Inventing Hope” reminds us that each of our lives, whether we keep sight of it or not, exists in relation to so many other lives, and that the ethical implications of our beliefs and our conduct can be deep and long-lasting—not in any remote or theoretical sense, but in exigent and even mortal ways—in the world Elie Wiesel witnessed and contemplated over the course of a long life, it is crucially important that every individual consider well the convictions they have about the world and their obligations to it, because when tyranny and terror draw near, it is these convictions that will determine how conscientious or complicit we will be, how uncorrupted or craven. For Wiesel, who until his death in 2016 crusaded for a saner and kinder world, and who felt keenly his debt to the memory of the millions crushed underfoot and to the generations yet unborn—chose always, as the title suggests, to bend his considerable intellect and saddened heart in the direction of integrity and reason and humanity. Reich, the journalist, is well-equipped to follow the strains of thought laid forth by Wiesel with trenchant questions; Reich, the person, is confronting, to the extent that he’s able, the agonized birthright left him by parents badly damaged by the brutality and bafflement they had suffered as blameless children.

This interplay of Reich’s own experiences and reflections, his recounted conversations with this warmly companionable sage, and the words written and spoken by Wiesel in his many books and lectures, combine to form a sobering and needful meditation on the enduring themes of remembrance and guilt, mercy and justice—a meditation rendered all the more vital given that we find ourselves in a time where the specter of anti-Semitism and the violence it breeds gathers in vehemence and stridency, a time when we need this just such an eloquent and principled entreaty to our decency and tolerance, and rekindle before it is too late our sense the we are kindred to each other, and obliged to care for and defend each other.