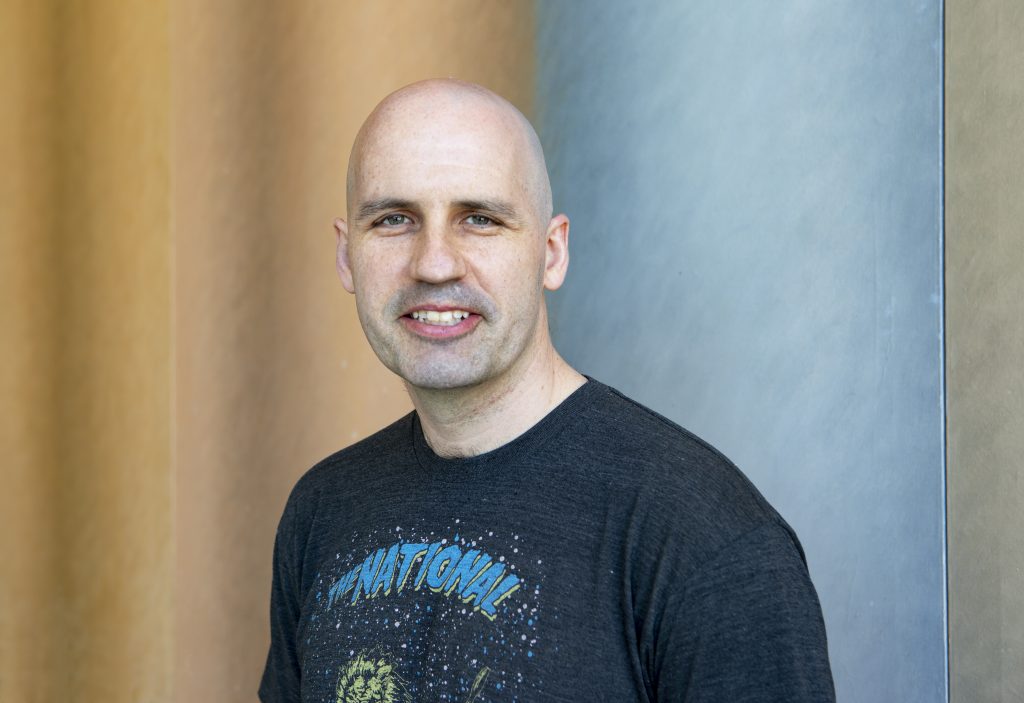 40
Jerry Brennan
Founder, Tortoise Books
“A highlight has been getting a few manuscripts that were so enjoyable that they made me forget about all the traditionally published books and neglected classics in my to-read pile,” says Jerry Brennan of Tortoise Books. The press has published short-story collections such as Christine Sneed’s award-winning “The Virginity of Famous Men” and “Adult Teeth” by Jeremy T. Wilson; and novels including “The Fugue” by Gint Aras. “It’s a real treat to realize you’ll get a chance to put something like that in front of a wider audience—and it’s especially nice when it’s an author you’ve already published, who trusts you enough to come back for another book.”

39
Nami Mun, Augustus Rose and Rebecca Makkai
Organizers, Chicago Lit Salon
Andersonville gastropub Hopleaf hosts one of Chicago’s most beloved writerly gatherings, the Chicago Lit Salon. Its founder Aleksandar Hemon, a PEN/W.G. Sebald Award-winning fiction writer, started the series, along with his wife Teri Boyd, in 2009 and ran it until he departed for Princeton in 2018. Today, the Salon is run by Nami Mun, who teaches creative writing and won a Whiting Award and Pushcart Prize for her book “Miles From Nowhere.” She shares duties with her novelist and screenwriter husband, Augustus Rose, who wrote “The Readymade Thief” and teaches fiction at The University of Chicago, as well as Rebecca Makkai, who is artistic director at StoryStudio, is on the faculty of Northwestern and whose “The Great Believers” won the Andrew Carnegie Medal and the Stonewall Award from the American Library Association, as well as being a finalist for the National Book Award and the Pulitzer Prize. Mun says, “Teri and Sasha have gifted us a great tradition and really, all we’re doing is maintaining it.” 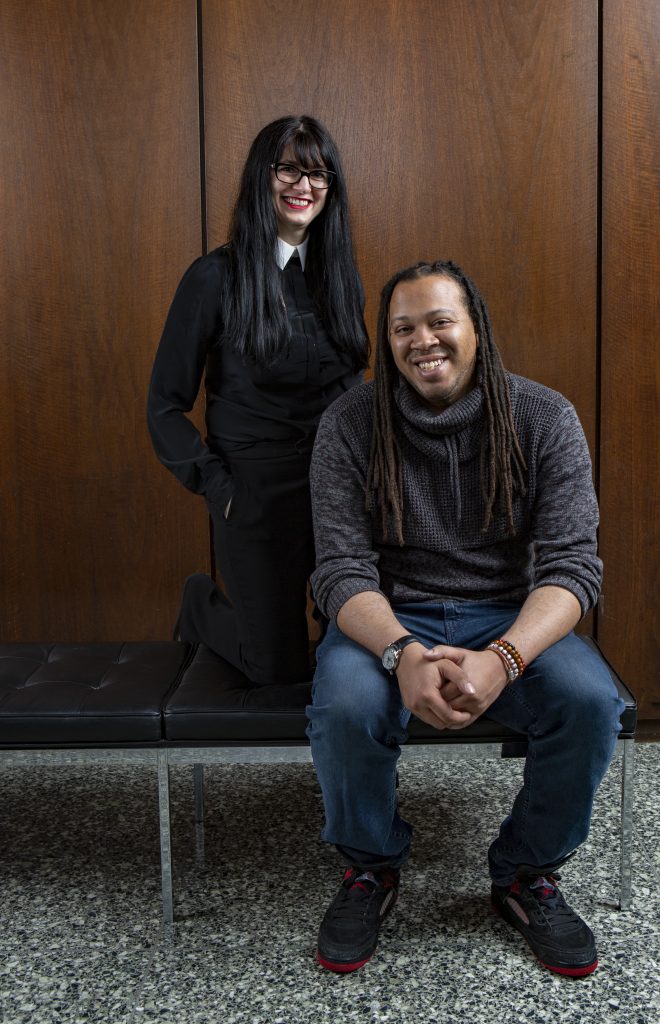 38
Simone Muench and Kenyatta Rogers
Founder and Organizers, Sunday Series
Grab a drink and pull up a stool at Hungry Brain in Chicago on the third Sunday of each month to hear some of Chicago’s best prose and poetry. You can catch up with Simone Muench, founder and organizer of the series, who seems to be everywhere at once; author of five books, professor of English at Lewis University, NEA Fellow and faculty advisor for the literary journal Jet Fuel Review. Kenyatta Rogers, fellow series organizer and equally prodigious creative force, is a Cave Canem Fellow, Breadloaf conference scholarship recipient, associate editor of RHINO Poetry and a widely published poet. 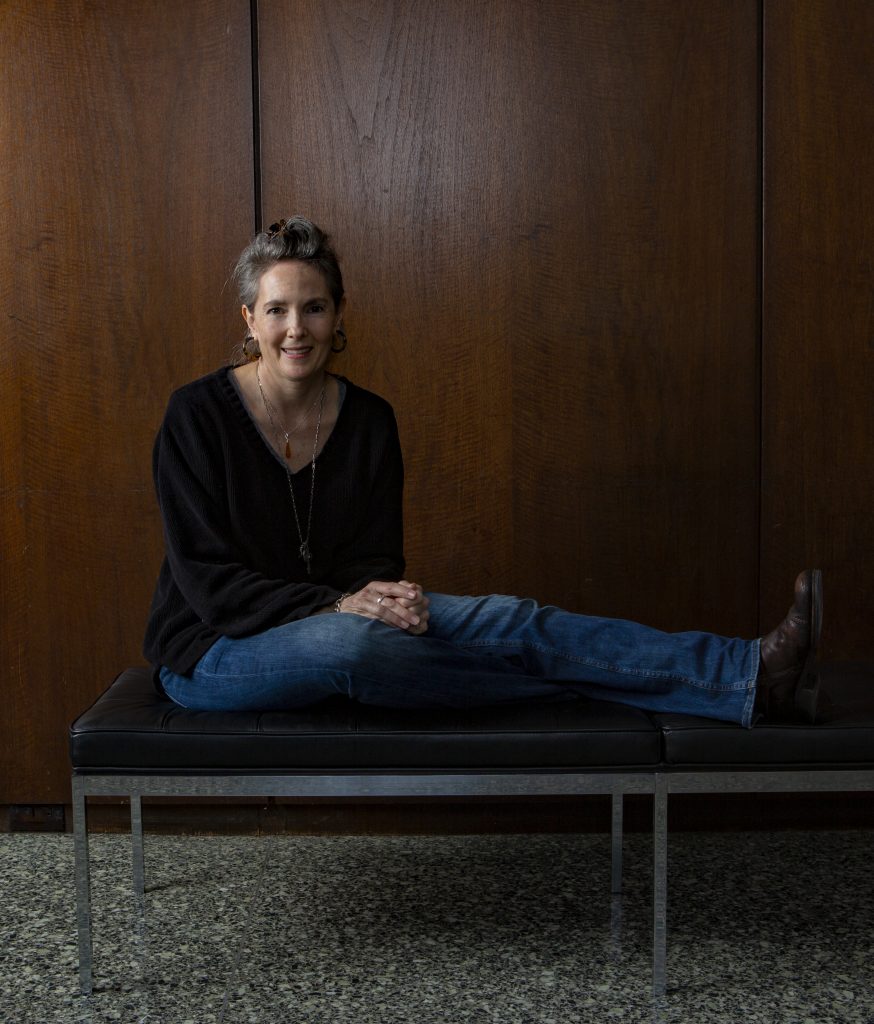 37
Christine Maul Rice
Author, Founder & Executive Director, Hypertext Magazine & Studio
Hypertext Magazine, a print and online journal, expanded last year into a not-for-profit with a social justice calling, teaching creative storytelling techniques to marginalized Chicago adults and publishing their work online and in print. “I asked myself, ‘What about the voices and stories of Chicago’s adults—people who might not have had the opportunity to play around in a writing workshop, folks rebuilding their lives after being incarcerated or recovering from substance use disorders or the elderly?’ Who’s listening to them?” says Christine Maul Rice. Hypertext Magazine & Studio works with social service partners Above & Beyond Family Recovery Center and St. Leonard’s Ministries, among other agencies. “Each workshop reveals such grit and beauty. Their bravery inspires me.” Rice is the author of the novel “Swarm Theory,” and a former teacher and editor at Columbia College Chicago Fiction Writing Department. Since 2010, Hypertext has published over 700 established and emerging writers online and in their biannual print journal since 2017.

36
Natalia Nebel, Betsy Haberl and Ignatius Valentine Aloysius
Curators, Sunday Salon Chicago
If, during a polar vortex there are no seats left at a bimonthly reading series, it is a sign the recipe is right. For eight years, the curated series Sunday Salon Chicago has featured literary prose and poetry in a cozy Roscoe Village pub, previously the Riverside Tavern, now known as The Reveler. “We’re driven by our passion for literature in Chicago and are thrilled that the series has evolved into a dynamic community,” curators Natalia Nebel, Betsy Haberl and Ignatius Valentine Aloysius say. Recent readers include Simone Muench, Kenyatta Rogers, Ian Morris, Kathleen Rooney, Rebecca Makkai, Eric Charles May, Nina Sudhakar, Will Boast, Faisal Mohyuddin and Alex Higley.

35
H. Melt
Poet, Artist, Editor, Educator, Organizer
“The purpose of my work is to help trans people live,” says H. Melt. By building relationships and community, documenting the experiences of trans people and making art centering trans people, they hope to challenge ideas about what is “normal” and celebrate trans liberation. “You have to find ways of supporting people and actively showing that you care about them in your everyday life.” Melt co-founded Queeriosity at Young Chicago Authors and champions the work of many writers at Women & Children First, where Melt works. Melt is the editor of “Subject to Change: Trans Poetry & Conversation,” which allows a variety of trans people to converse with each other, and  the author of “On My Way to Liberation” and “The Plural, The Blurring.” Lambda Literary awarded Melt the Judith A. Markowitz Award for Emerging LGBTQ Writers. 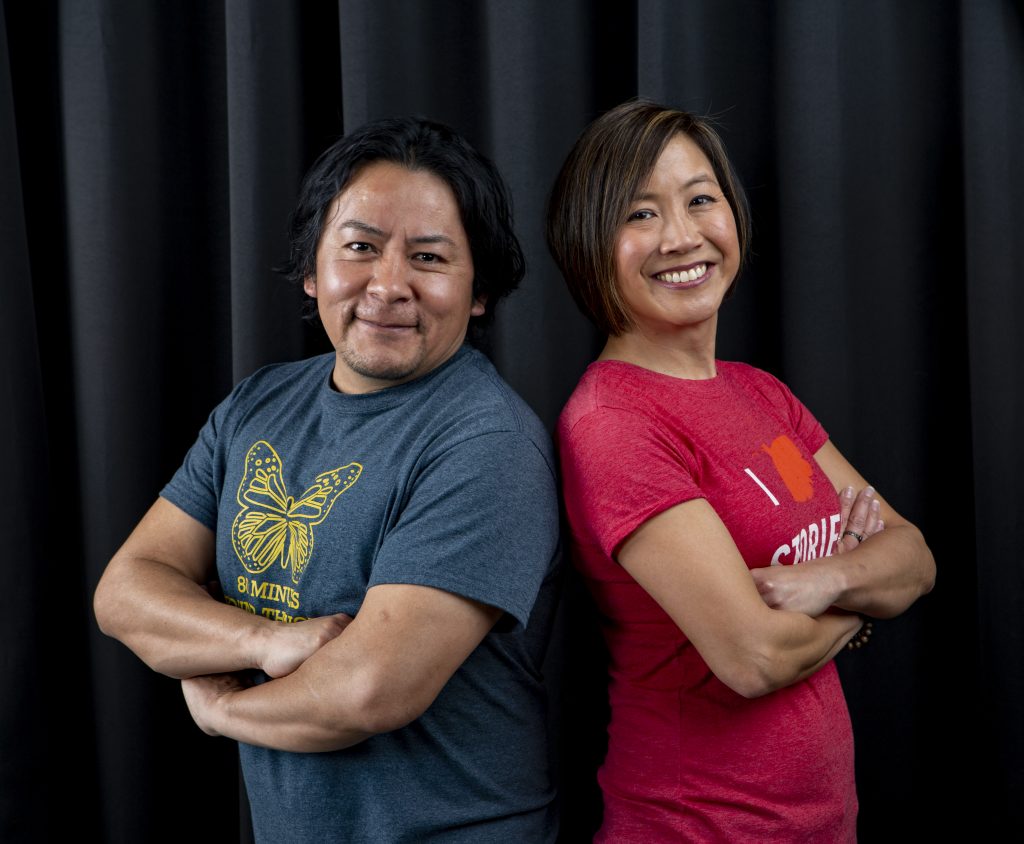 34
Nestor Gomez and Joyce Kim
Founder, 80 Minutes Around the World; Producer, The Moth
Live storytelling has thrived since humans first gathered around a campfire. One of the most successful long-standing modern-day storytelling successes is The Moth, which hosts international storytelling competitions, called SLAMs; curated shows on The Moth Mainstage; The Moth Radio Hour (which airs on 500 public radio stations including WBEZ); The Moth Podcast; and community workshops for educators and young people. The Moth has also published a few books.”There is something magical about listening to a story told in front of a live audience—the way people connect to a story and the emotions that a story can evoke is sometimes so palpable in the room,” says Joyce Kim, producer of The Moth in Chicago. “Chicago is such a rich and vibrant storytelling community, and I feel very fortunate to be a part of preserving and growing this art form.” Each month, Chicagoans bring their true personal stories to share at StorySLAMs. In mid-May, The Moth also held its first-ever Spanish language StorySLAM in Chicago, hosted by Nestor Gomez. who also created, produces and hosts a series, “80 Minutes Around the World,” highlighting immigrant stories. After immigrating undocumented from Guatemala to Chicago in the 1980s, Nestor told his first story at a Moth story slam to get over the stuttering that afflicted his childhood. Since then he has won close to forty Moth slams and several Grand slams. His stories have been featured at national radio shows such as The Moth Radio Hour and Snap Judgment. “I never imagined I would share stories in front of an audience and provide a platform to other immigrants to share their stories.” This is one of the biggest honors of his life, he says. 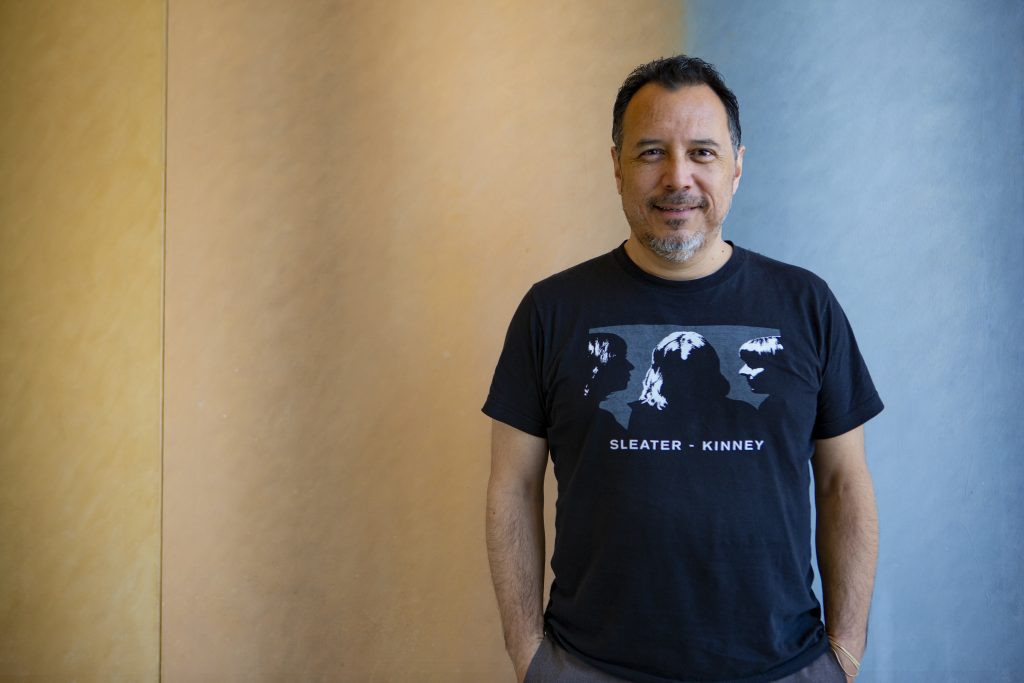 33
Javier Ramirez
Host, Judge and Manager, The Book Table
“It was an honor to be selected this year as a fiction judge for the seventieth-annual National Book Award, but when my fourteen-year-old son Diego told me that he’d shared the news with his reading teacher without prompting, that’s when it really hit home for me,” Javier Ramirez says. The manager of The Book Table, Ramirez is also the founder and host of Authors on Tap, featuring lively conversations with Ben Austen, Rebecca Makkai, Augustus Rose, Charles Finch and Camille Bordas. He co-hosts Publishing Cocktails, a semiannual gathering of book industry professionals and authors, coordinates publisher rep nights for Chicagoland booksellers, is on the ABC Advisory Council for the American Booksellers Association and was a judge for the 2017 Kirkus Prize for nonfiction.

32
Sheryl Johnston
Literary Publicist
Publicists are not always good at tooting their own horns but some can’t help but attract our attention for a body of work. Sheryl Johnston has worked quietly but powerfully behind the scenes to promote authors, including Chicago Library Foundation 21st Century Award winners Christine Sneed, Eric Charles May and Amina Gautier; as well as Cris Mazza, Jeremy T. Wilson, Bonnie Jo Campbell, T. Geronimo Johnson, Don DeGrazia, John McNally and Joe Meno. “Being a writer is one of the hardest jobs in the world. When I commit to an author, it’s not just about promoting the book. The ultimate goal is to help further that person’s career,” Johnston says. For eighteen years, Johnston was an artistic consultant and producer of the beloved Story Week Festival of Writers, formerly held by Columbia College Chicago.

31
Eileen Favorite
Co-Founder, Her Chapter
Eileen spreads her influence through Her Chapter, a collaborative gathering for women in literature to share knowledge about writing, celebrate achievements and encourage members. “Our Cheers and Challenges are always my favorite events. Women are trained to self-deprecate and minimize their accomplishments, so it’s vital to announce what’s going well and have it witnessed by others. Then we discuss what’s challenging us, and we brainstorm strategies on where to publish, how to promote, how to get the work done while juggling jobs, children, spouses, health issues. Airing all of this creates greater transparency and combats the competitive jealousies that keep most writers in their silos.” Topics include social media presence, residencies, time management, being a better reader, publicity, self-publishing, editor’s visits and writing prompts. An upcoming workshop will focus on failure and rejection. Favorite, a novelist, also teaches at the School of the Art Institute and the Graham School at the University of Chicago.