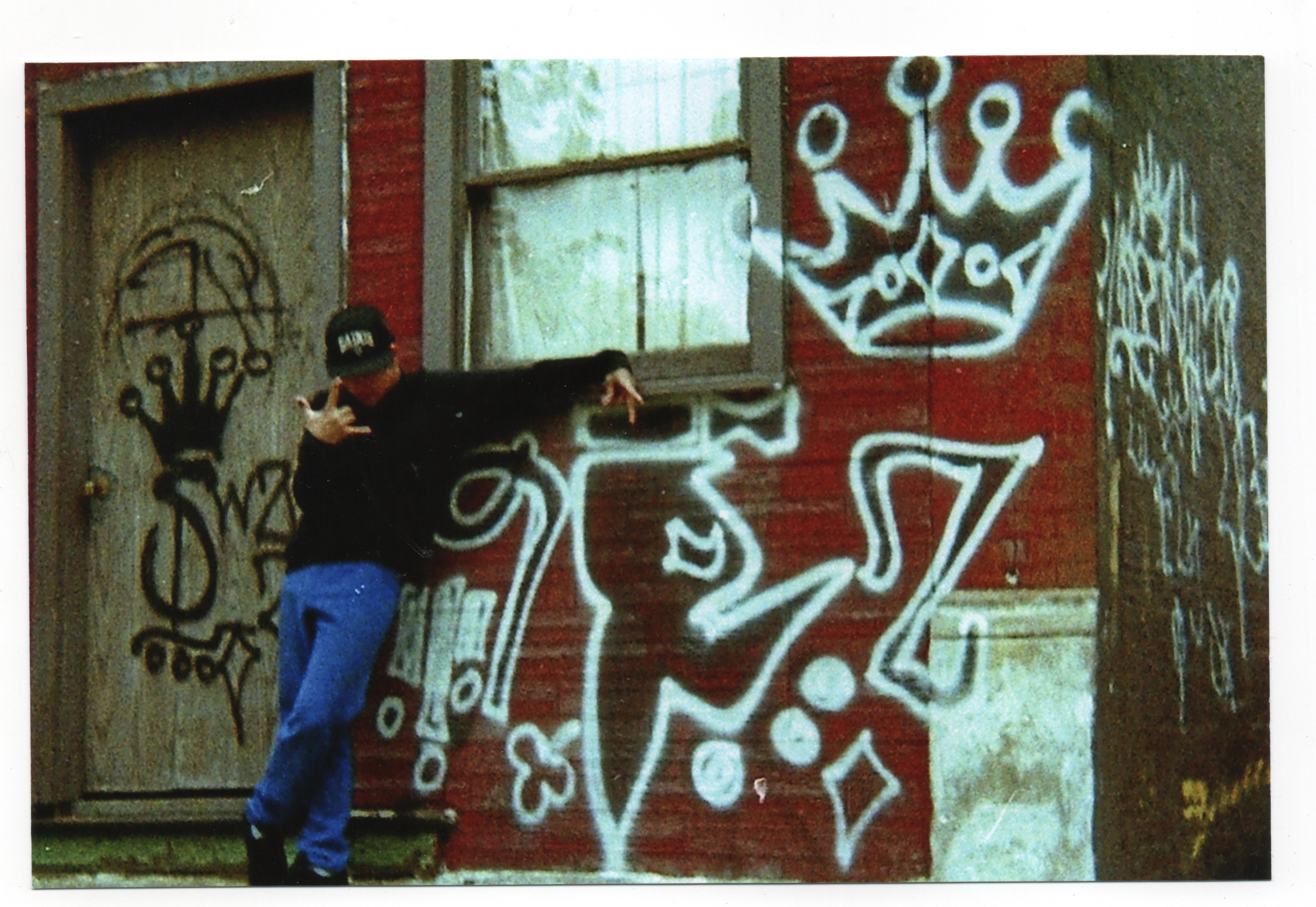 For gangbangers in Chicago, knowing your “Lit”—literature of rules, structures, symbolism, dress code, ideology and code of conduct—can be the difference between life and death. “Compliments Of Chicagohoodz” transforms gang lit into high art.

My dad was a Stone Greaser, he was a Devon Boy, and later he started Bryn Mawr Boys. He was a dangerous street fighter. One of his best friends was shot point-blank in the face with a shotgun—my dad was the first to his aid and says he’ll never forget the sound of his friend’s screams. His friend survived, lost an eye and happened to be the father of two of my best friends growing up. My eldest brother joined the TJOs, the gang that took over after Devon Boys and Bryn Mawr Boys dissolved. He later flipped Gaylord, Sunnyside and Magnolia and ended up the leader of the Gaylords in Menard prison for a time. I was born into this obsession with the history of street gang culture in Chicago. 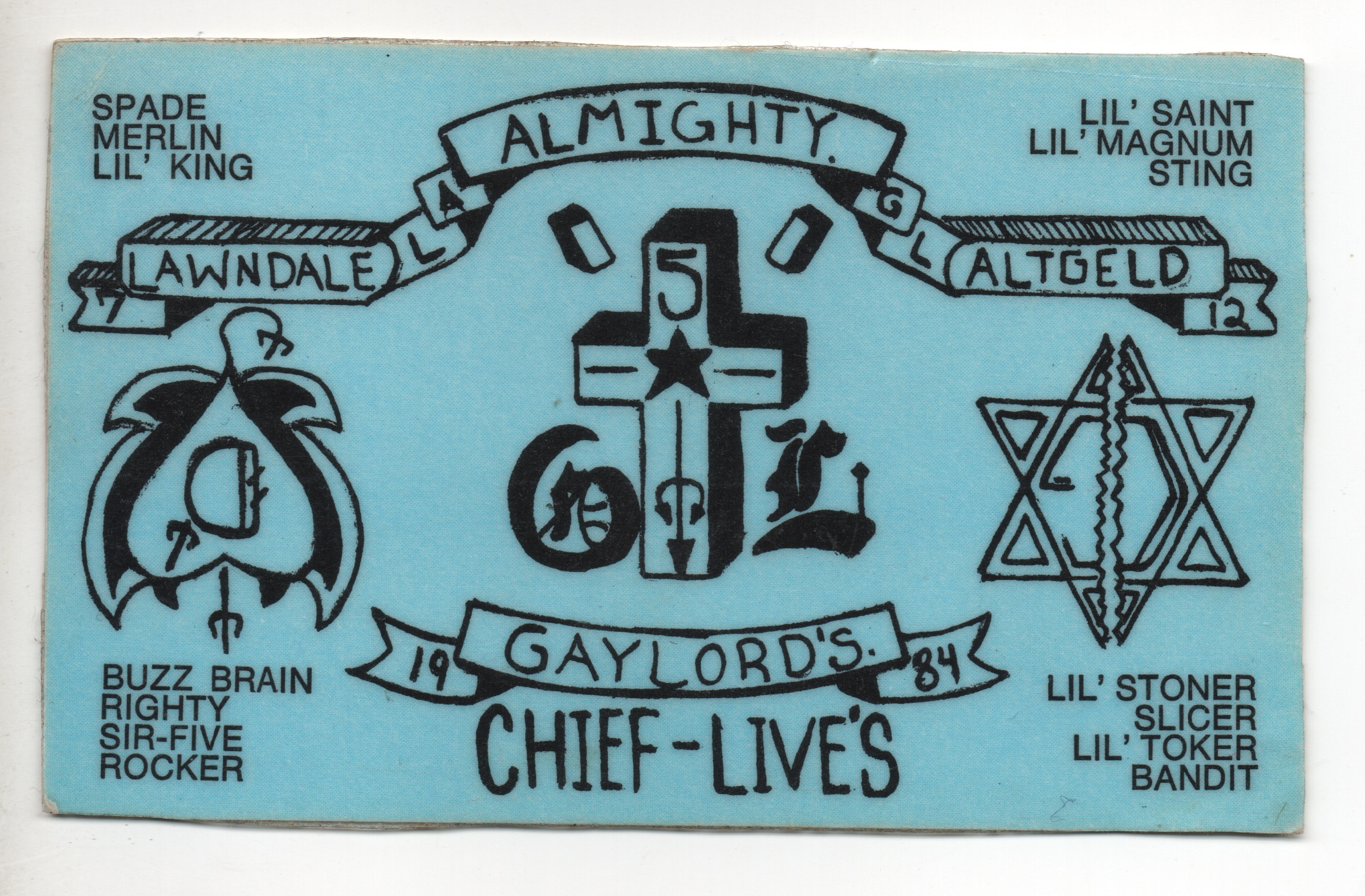 A hand-drawn Gaylords (aka G / L) compliment card from their Lawndale and Altgeld (LA) branch, in honor of a deceased Native American member. It displays an inverted Latin Disciples emblem and pitchforks, and broken six-point star of the Folk Nation. The Gaylord cross bears the number five of the People Nation. “7” and “12” = G and L. 1984.

When Mr. C and Jinx reached out to me about the book they were working on, it piqued my interest. In Edgewater gang lore, no two names ring out louder than Joe Ganci and Gary Kellas, who were the Butch Cassidy and the Sundance Kid of the neighborhood. Mr. C and Jinx knew about them and wanted the goods. I could only give a filtered view of these monsters of my childhood. The folklore of gangs in this city has always been contentious and blurred. For example, I met Kellas at my friends’ father’s funeral and he told me the true story of the Carson’s Ribs shootout with the DEA. Kellas, who’d been struck square in the forehead by a DEA agent’s bullet, showed me the scar, looking at me intensely with his trembling blue eyes. It was a superficial wound and Kellas returned fire with his machine gun. The truth is often more outlandish and fascinating than folklore when it comes to Chicago gangs.

“Compliments of Chicagohoodz” is the true story—factual, researched, mapped, documented—the sources are legit. The photographs are portals into a time when now-high-rent districts of Chicago were wild with gunshots, broken bottles, symbolic graffiti, coded language and tribal warfare. If you live on the North or West Side, it may be fun to look at the maps in the back pages to see that you may live in a Latin King or Simon City Royal hood, that those chips in the bricks near your front door were made by bullets aimed at the heads of former residents.

The factual dissection of the structures and history of gangs in Chicago in this book is so righteous that if it were published in 1975, 1988 or even 1993, every gang in the city would have been forced to put out a SOS (shoot on sight) on Jinx and Mr. C. Luckily most of the bangers who would have done the dirty work are either dead, locked up or, if they lived this long, semi-reformed, fully-retired and flipping through these pages, spotting old friends and enemies, and saying to themselves, “Damn, these dudes nailed it.”

We spoke with Jinx and Mr. C. about their work.

Where did this fascination with Chicago gang culture begin for you?

Jinx: The fascination began as a little kid when I would hear kids moving in from other neighborhoods talk about these gangs from where they used to live. As I got older and ventured into other neighborhoods I began to realize this culture wasn’t very far from me at all.

Mr. C: For me, it began as a child growing up on the North Side in the 1980s, and seeing the graffiti and emblems all over the place: pitchforks, canes, crosses, hooded figures. I used to copy them on my notebooks in grammar school. 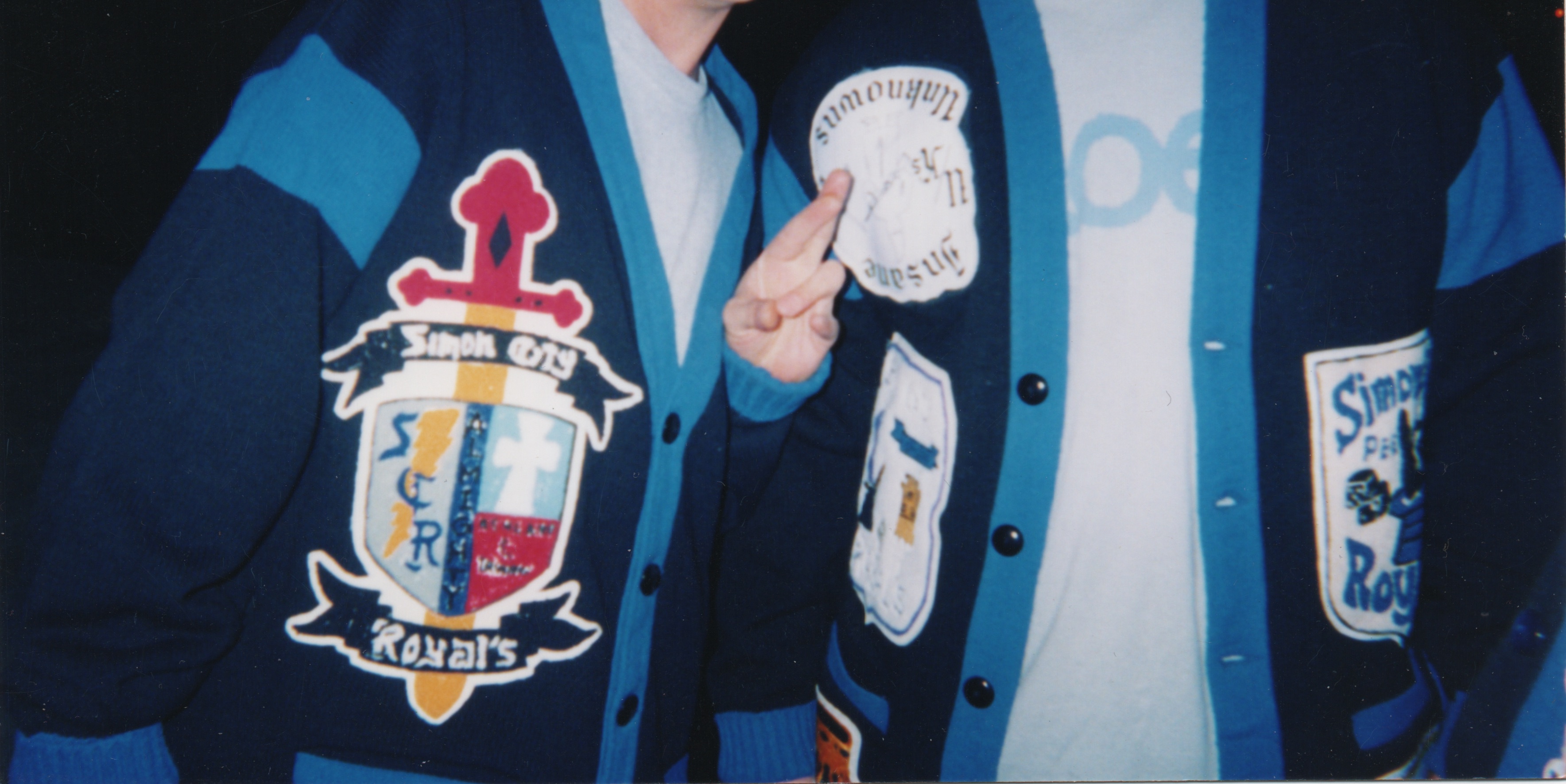 Sweaters from the Albany and School branch of the Simon City Royals. Photo: courtesy of Weasel

What was the most surprising development as you made your research?

Jinx: The most surprising thing to me was how organized a lot of gangs are. I didn’t know a lot of them had to follow such strict rules, such as doing hard drugs, as well as go through channels and hierarchy in order to go to war with other gangs or even in some cases make a compliment card.

Though many of the gangs you investigated have faded away, some continue to this day. What is the contemporary state of these major street gangs? Do they continue to drive the murder rate in Chicago?

Jinx: Well, I wouldn’t use the term “investigated,” but the gangs that are active today have only grown more violent. Law enforcement has made it harder for them to communicate with their senior members who are locked up so younger members fight for leadership and this has created splinter gangs or “blocks” which often end up fighting each other. And guns are way too easy to get.

Mr. C: To me, gang culture seemed to parallel corporate consolidation, with smaller clubs subsumed into larger entities over time. As deindustrialization and white flight progressed, most of the white gangs faded out or moved out of the city, while the few remaining ones have adapted and are still around. Chicago used to be such a working-class city, and now—like every major city—it’s sadly being taken over by yuppies and losing a lot of its character. Neighborhoods like Pilsen and Wicker Park are good examples of this. Many gangs have become more active in the suburbs than in the city. On the South Side, the incarceration of gang chiefs like Larry Hoover and Jeff Fort in prisons like [the Supermax] ADX Florence has led to a loss of structure, fragmentation and resultant violence. Some have compared it to the power vacuums in places like the Middle East. 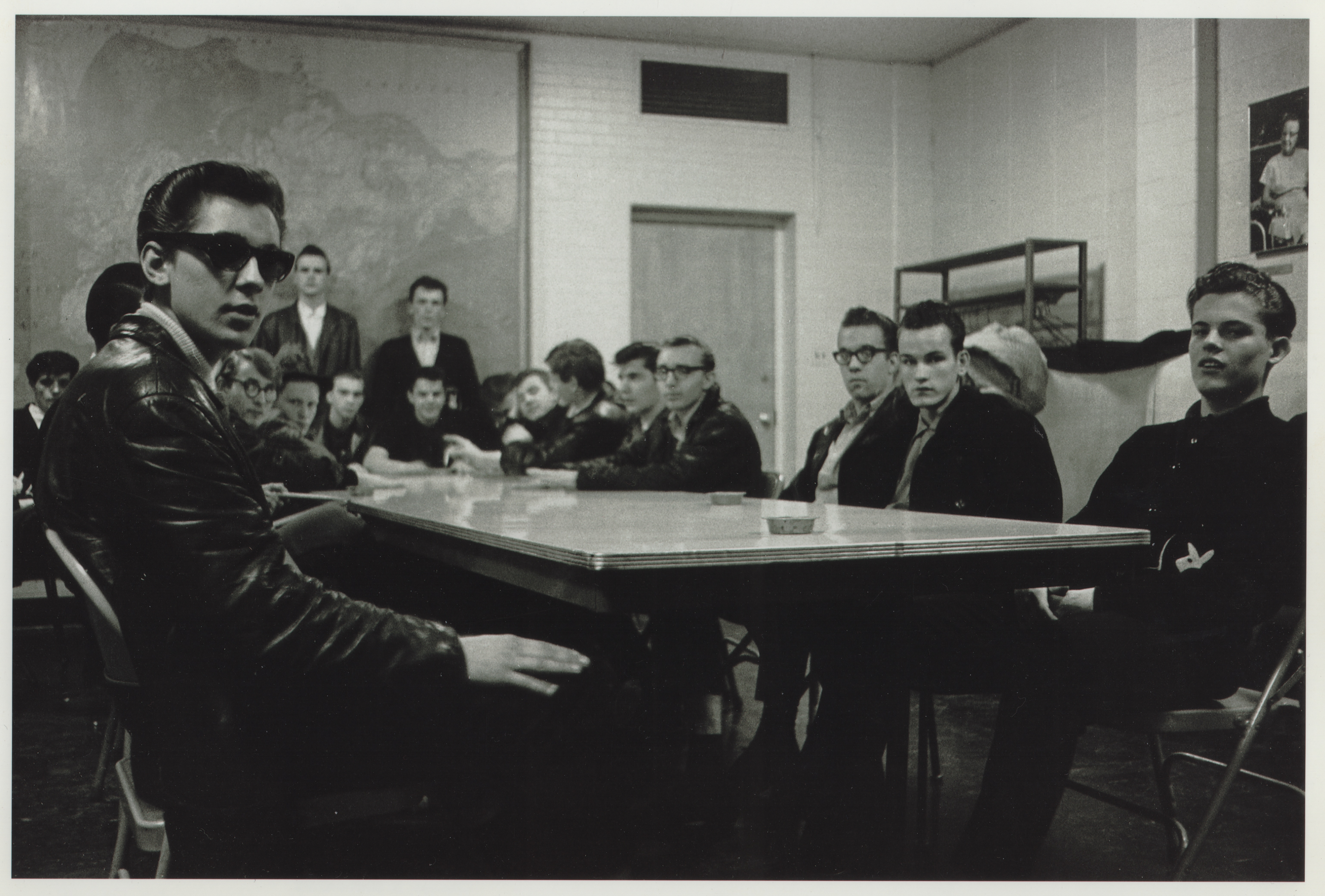 Old School Gang Meeting: The Playboys of the East Village neighborhood at a gang intervention meeting, circa 1960.

What is your favorite image in the book?

Jinx: There is a picture of a Latin King in Little Village standing against a wall. It’s not because of who he is or what he’s doing, I just think it’s a powerful photo. I didn’t orchestrate it, it just came out that way.

Mr. C: I love the image of the Playboys’ gang-intervention meeting from the early 1960s. It really captures the greaser era, which is where the book jumps off. I’m fascinated by how that style persisted into the 1970s and even beyond. On that note, I’ve always liked the “Loyal Order of Grease” compliment card, which documents the era right before the greaser wars of the 1970s.

Have you had any threats from gangbangers or any harsh words as you compiled and published the book?

Jinx: I had a lot of harsh words from everyone from gang members and community residents to police officers. A lot of gang members are in this life only for financial gain. This is the life they know in their neighborhood. Some of these kids are second, third or fourth generation. Police, knowing this, would kick me out of the neighborhood because they feel I don’t belong there and don’t want this lifestyle promoted in any way—which I understand, and that goes for the residents of the community as well. Having to protect your children is hard enough in any neighborhood without having to worry about the group hanging out on the corner or porch across the street.

How did you get ahold of so many business cards? And how were they used back in the day?

Jinx: The first little stack of compliment cards were given to me by my neighbors who moved out of the city to escape the violence. Their mother made them get rid of all their memorabilia. It wasn’t until I started working on this project in the late 1980s that I started picking up more and another friend donated his collection to help this project as well. Compliment cards were often invitations to the neighborhood, often for recruitment or just advertisement. They would often underline their name on it or write their name on it and say, “When you come to the neighborhood, just tell them I gave this to you.”

Has this project satisfied your fascination with Chicago gang culture or can we expect more projects down the line?

Jinx: This book has given me a lot of respect for anyone that has ever done this before. I am exhausted, to be honest. This wasn’t even the big book I was working on. This was supposed to be an introduction to a bigger history book that was to cover a lot more ground in Chicago history. That’s what I am really interested in.

Mr. C: Jinx suggested doing a compliment card book with commentary as a promotional tool for that. We thought that might only take a few months to put together! He has such an extensive collection, it just sort of grew from there. Adam Parfrey at Feral House really encouraged us to expand it and five years later here it is.

What’s one of the unique messages this book delivers?

Mr. C: I think the book goes to show that there is an artistic and creative side to everyone, even if it sometimes gets channeled in the wrong direction. Some people don’t consider it art, and more of an urban blight, but I object to omnipresent corporate advertising and reckless urban development more than graffiti.

Jinx and Mr. C. will discuss “Compliments of Chicagohoodz” at Quimby’s, August 10 at 7pm.